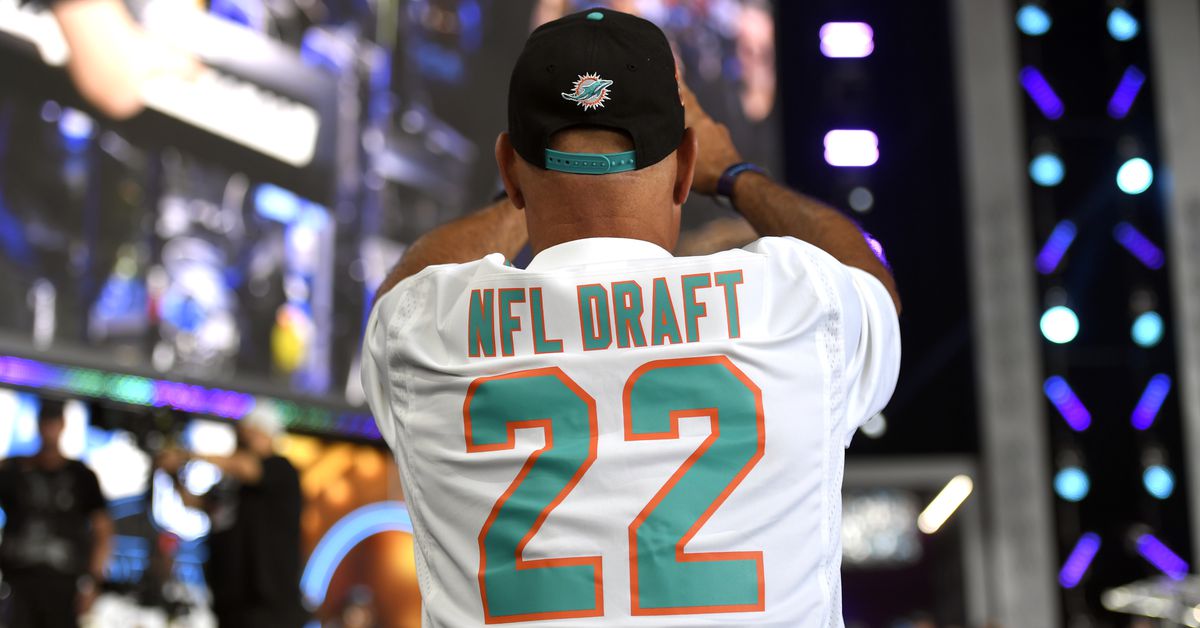 Reported undrafted free agent signings are included in the list below, but those signings have yet to be confirmed by the Dolphins. Undrafted free agents have, in the past, switched teams after agreeing to terms and being on their way to signing their contracts. We’ve marked the UDFAs in italics, just in case something weird happens and they don’t make it to Miami.

The Dolphins added Thompson with their final draft pick, bringing them to four quarterbacks on the roster. Tagovailoa is the clear starter, with Bridgewater as a backup. Thompson ranks ahead of Streveler on this depth chart simply because there is a capital project involved in his acquisition. Thomson and Streveler face a steep climb to try to make the roster, with the potential that Miami could look to keep them both on the practice squad.

There really aren’t many post-draft adjustments to the running back position. Edmonds and Mostert are the two best backs, with Gaskin serving as their main backup. Ahmed and Doaks are the depth options, while the addition of White gives the squad a developing player who will likely head to the practice squad at the end of pre-season.

No change here. Ingold is arguably the best fullback on the roster as Lovett looks to prove he’s ready to return from an ACL tear in 2020 that caused him to miss all of last season.

The biggest change between our last look at the depth chart and this one is DeVante Parker’s trade with the New England Patriots. Parker just became the odd man in a revamped wide receiver corps this year. Make the case for Waddle or Hill at the top of the depth chart – it really doesn’t matter because they’re both going to be starters and they’re both going to see a lot of targets. Wilson will likely be the third receiver. Ezukanma is still a raw talent, but he has the potential to become a solid role for the Dolphins; he’s slipping through the depth chart in fifth place right now. It looks like he could be the team’s way of replacing Parker and potentially setting up the team to leave Williams. Bowden’s role will be interesting to watch this summer as the Dolphins could look to move him up the offense, playing as much of a running back as a receiver. Sherfield, Williams, Core, Cracraft and Dedmon remain the depth options that will battle to bring the bottom end of the position group up.

No change here. Smythe and Gesicki will be the top two on the depth chart, and Smythe might actually continue to be the listed starter while Gesicki plays more snaps, but those two are clearly at the top of the list. Shaheen brings depth, while Long needs to step up in his second year. Carter is a special teams player who may have to prove himself to the new coaching staff if he is to stay on the roster in 2022.

The offensive line was a point of contention among fans during the draft, with many upsets the team used a pick on a wide receiver (Erik Ezukanma) in the fourth round rather than adding an offensive lineman. At this point, it feels like the coaching staff believes they have the players they need to improve the line. Clearly, Armstead locks down the left tackle position, while Williams likely steps up to left guard (although Miami may look to move him early in the half to see if they have a better combination with him on the right). Deiter appears locked in center, with the team adding undrafted free agent center Clary to serve as a potential development/depth option. The right guard makes it look like it’s Hunt’s, but Hunt should also consider the correct tackle position. If he claims that role, Kindley could move up to the right guard position. Eichenberg, Jackson, Jones, Little, Coleman and Pankey will all join Hunt in deciding who the right tackle will be.

The defensive line hasn’t changed at the top of the depth chart, where Ogbah, Davis and Wilkins are likely the starters, with re-signed Jenkins also seeing plenty of snaps. Sieler and Butler are probably the main players in the rotation. Jones, Hall, Carney, Johnson, Stille and Williams will all fight for deep or practice positions on the team.

In the previous version of the depth, the analysis of linebackers began, “Linebackers could be an area targeted by the Dolphins in the draft or in the rest of free agency.” With two of their four draft picks used on linebackers, it looks like that claim has come true. Tindall could find a rotational linebacker role this year, but it looks like he should be behind Riley and Eguavoen right now. Goode likely needs to prove himself on special teams if he wants to move up the depth chart and/or stick to the roster this year.

No changes to cornerbacks, other than adding the two UDFAs. Igbinoghene must prove himself at the start of the summer if he is to retain a place on the list; he is still only 22 years old, so he has time to develop but he needs to be more consistent. By comparison, Hamiton, one of the UDFAs, turns 24 this month. Williams is a player with great potential who also needs to show more.

No change to the security group. Miami could still be looking to find a veteran safety to add this summer to replace Rowe if they want the salary cap savings, but given they’re $12 million under the cap according to the NFL Players Association (OvertheCap. com still has Miami just over $20 million in cap space), there’s no need to push it.

The previous depth chart predated Morstead’s signing, leaving Miami with no punters. Now they have two. Heatherly is probably just a camp stopover to save Morstead from having to do all the preseason training camp and punts.