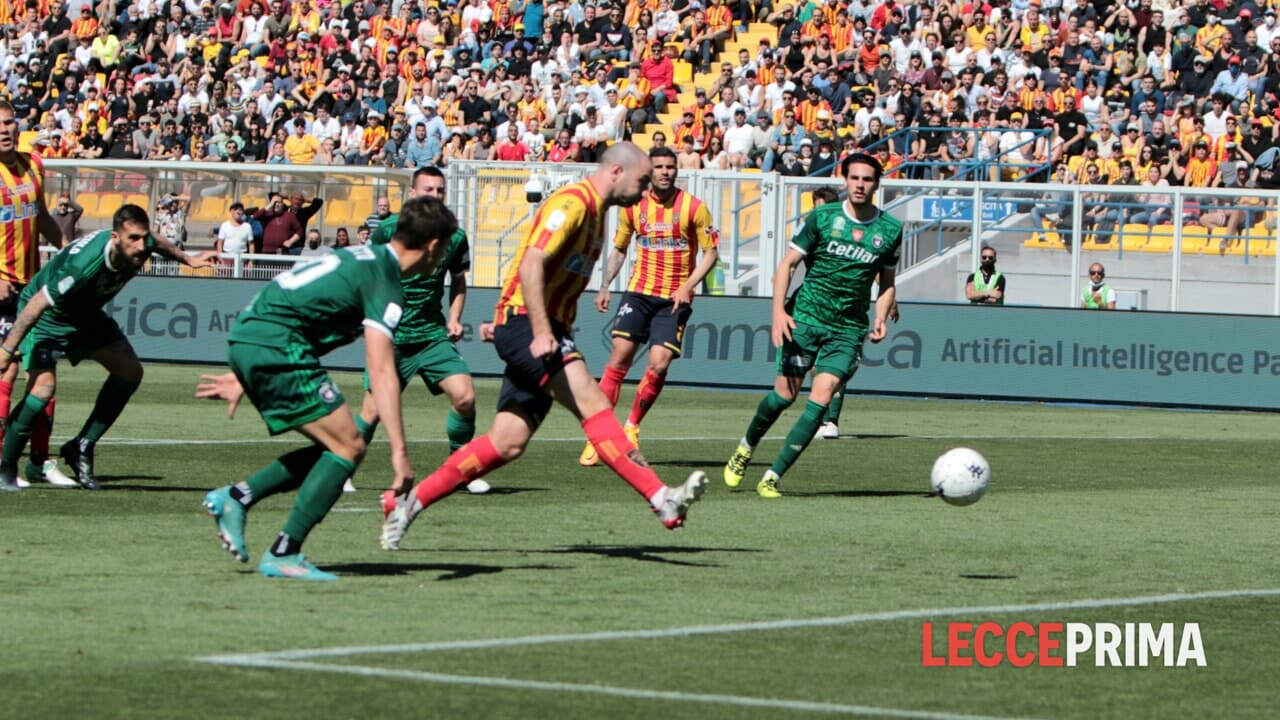 LECCE – On a practically perfect day, also by virtue of the other results favorable to the Giallorossi, Lecce wins 2 to 0 against Pisa, moves to the top of the standings and puts a foot in Serie A.

The goals were scored by Lucioni at 18 ‘and by Faragò at the end of the match. Pisa never committed Gabriel, except with a central header in the second half. At the end of the match the approximately 25 thousand spectators of the Via del Mare sparked their enthusiasm, aware that the defeat of Cremonese in Crotone and of Monza in Frosinone made the race towards direct promotion easier (even closer after the external victory of the Ternana in Benevento for 2 to 1, in the match played from 6pm).

In the last two rounds of the championship, the Salento players will be involved in Vicenza and then at home against Pordenone. Thanks to the different combinations of hypotheses of detached classification, with two points the Serie A will be done, regardless of the result of the other teams.

Lecce starts with cuirassiers Blin and Gargiulo alongside Hjulmand, with Dermaku teaming up with Lucioni and Gendrey preferred to Calabresi. The hosts immediately make it clear that they want to make things clear: at the 2nd corner of Strefezza, a header by Dermaku and an amazing intervention by Livieri who saves his own goal with the help of the crossbar.

Baroni’s team does not let the opponents play, limiting the restart attempts in the bud: Birindelli and Beruatto struggle so much to find the space for progression on the flanks, having to worry more than anything else to contain Di Mariano and Strefezza. In the middle of the field Nagy and Benali try to keep order but the Giallorossi also take their breath away and, even when the Nerazzurri manage to weave some plot, the finishing touches are still missing for Puscas and Torregrossa, two forwards who need no introduction but who have always remained on the sidelines of the game.

At 18 ‘the advantage of the Giallorossi: on the development of a set piece, Lucioni remains in an advanced position and receives a cross from Coda with perfect timing: touch with the flat of his right foot and ball in the net. It is played in a half field, in practice, and while Pairetto avoids extracting a few cards that would also be there, Lecce builds at least a couple of tempting opportunities to score again: a first, at 33 ‘, is nullified by the signaling of offside, the second resulted in a cross from a cross from Strefezza.

The start of recovery still sees Lecce as the protagonist who controls the game with great attention, trying to keep the center of gravity away from Gabriel. Pisa, for its part, must try to do something better and then inevitably begins to expose itself to the dangerous restarts of the Salentines: at 54 ‘Gargiulo, launched face to face against Livieri, misses the last check and lets himself be anticipated. At 59 ‘Coda, with his head, extends a free kick from Strefezza towards the far post but the ball ends at the bottom. D’Angelo inserts Sibilli and Lucca for Benali and Torregrossa, trying above all with the first, who in the first leg had decided the game, to increase the unpredictability of the offensive maneuver: in one circumstance the number 17 goes away on the left front of the attack, but Dermaku is very good at intercepting the direct pass to two teammates practically free to hit the net. Gabriel gets his gloves dirty for the first time in the 67th minute after a central header from Lucca. Among the Tuscans there are obvious problems with sealing: De Vitis takes the place of Mastinu in the 71st minute.

At 74 ‘triple change for Baroni: inside Calabresi for Gendrey, Tuia for Dermaku and Faragò for Gargiulo. It takes fresh strength to keep the intensity high, without stretch marks, and so does Bjorkengren for Blin. Cohen for Beruatto and Masucci for Puscas are the last arrows in the bow drawn by D’Angelo in the hope of finding a favorable episode, while shortly before Listkowski had replaced an exhausted Strefezza.

The right-hand chain with Calabresi and the young Pole works particularly well and in the 86th minute the doubling arrives: the offensive winger gains the back and serves Faragò at the near post who kicks on goal by first intention finding Livieri unprepared. It is the seal that closes the match, despite the five minutes of recovery granted by the referee. The celebrations of the Giallorossi have all the air of being liberators: in the middle of the field, to collect the standing ovation, also the president Saverio Sticchi Damiani, protagonist of a Saturday Press conference which, in all likelihood, helped to put things back in the right direction after a really stupid week that began with the defeat in Reggio Calabria.

The declarations of Baroni and D’Angelo

Mister Baroni in the press room had words of great gratitude to his players and to the many supporters who flocked to the stadium: “Today it was truly a commercial for football: a packed stadium, extraordinary cheering, perhaps this is the best victory. because there is a way and a way to win races. We did it in an overbearing way, through play. The opponent went into difficulty: Pisa are a strong team, but we really played the perfect match, from a qualitative and mental point of view, we didn’t want to leave anything on the pitch. Congratulations to the guys, but now we have to stay focused like this and let’s think about recovering our energies well and preparing for the next one “.

The coach of Pisa, Luca D’Angelo, recognized the value of the opponents: “We had a good first half, in line with that of Lecce but unlike them we conceded a goal, in the second we struggled because Lecce increased the pressure on ball carriers. My goal was to return to the locker room on a draw and then see what would happen, but after the goal we conceded we had to raise the center of gravity. I can’t say anything to my boys, we started to have a good championship, with merit we got to play for the A against Lecce who were superior to us ”.

The scoreboard of Lecce-Pisa 2 to 0