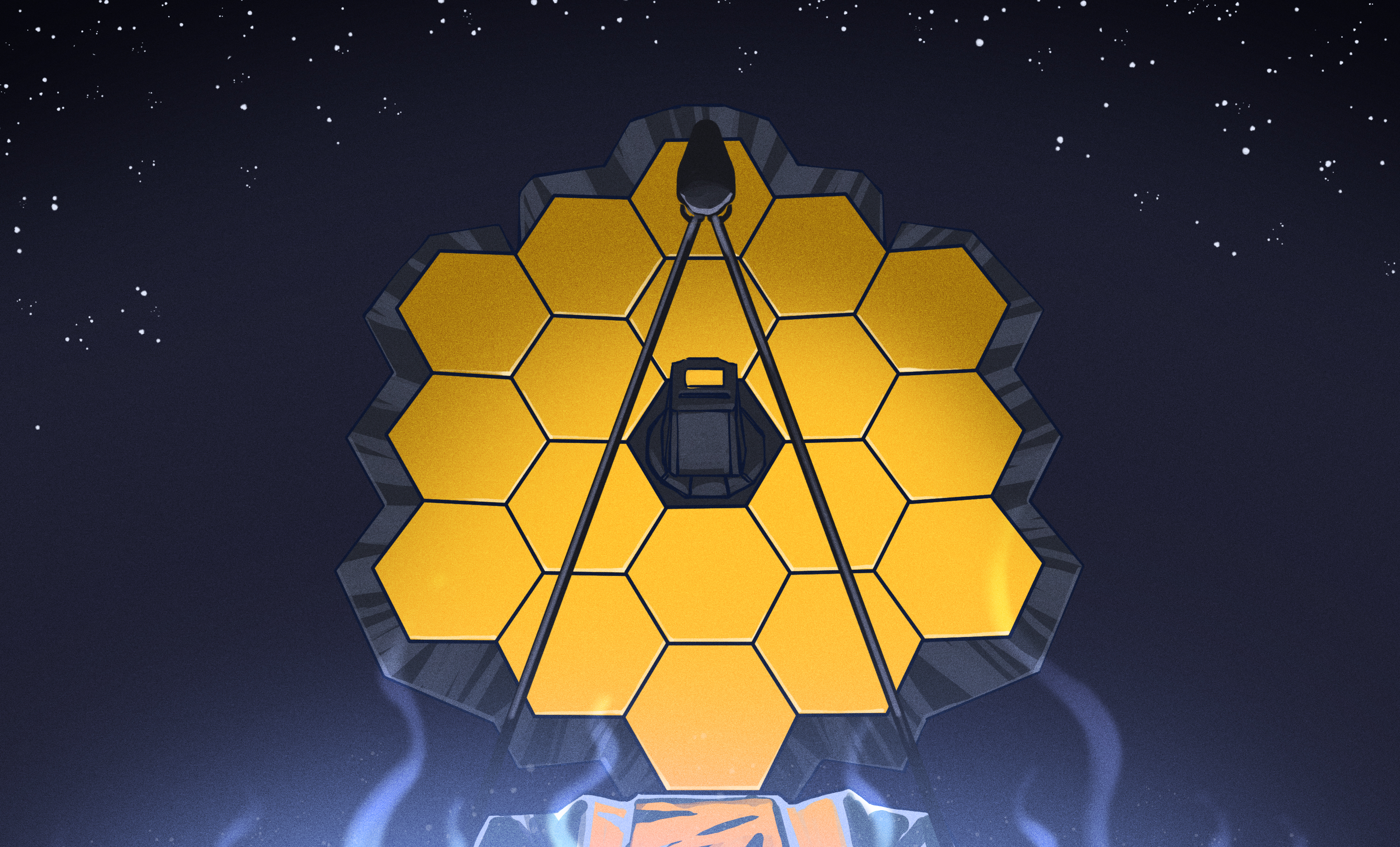 If you were asked to name the coldest place in the solar system, chances are you’d think it would be the farthest possible from the ultimate source of all the system’s energy: the Sun. It stands to reason that the further away you are from something hot, the more the heat spreads. And so Pluto, planet or not, could be a good guess for the record low temperature.

But, for as cold as Pluto gets – down to 40 Kelvin – there’s a place much, much colder than that, and ironically, much closer to home. In fact, it’s only about a million miles away, and right now, sitting at just 6 Kelvin, the piece of silicon at the focal plane of one of the main instruments aboard the James Webb Space Telescope makes the Pluto’s downright smooth surface. .

The depth of the cold on Webb is all the more astonishing because just a few feet away the temperature is 324 K (123 F, 51 C). The hows and whys of Webb’s cooling systems are full of interesting technical details and deserve close examination as the world’s newest space telescope prepares for observations.

Probably the most obvious first question regarding cryocoolers in space is: why the hell does Webb even need a cryocooler? Isn’t space, especially the area around the orbit of Webb’s halo around the Lagrange point L2, cold enough already? In a nutshell, no – the infrared astronomy Webb’s instruments are designed for, space is nowhere near cold enough. But what is so special about infrared astronomy and why does it require such low temperatures?

From its earliest conceptions, what would become the James Webb Space Telescope was always designed as an infrared telescope. That’s because the objects Webb had to study are some of the oldest objects in the universe, and Hubble’s law tells us that the farther away an object is, the faster it travels away from Earth, light d They will be dramatically red-shifted thanks to the Doppler effect. This means that the light from virtually anything Webb will be pointed at is somewhere in the infrared part of the spectrum. Webb’s four sets of imaging and spectrography instruments can cover from the very edge of the visible part of the spectrum, around a wavelength of 0.6 μm, down to wavelengths of the mid-infrared around 28 μm. For reference, microwaves start at wavelengths around 100 μm, so the frequency of light that Webb is designed to study is not that far above the radio part of the electromagnetic spectrum. .

The problem with infrared astronomy is that the sensors used to capture the light are easily overwhelmed by the heat of their surroundings, which radiates in the infrared region. Additionally, the photosensors used in infrared telescopes are sensitive to dark current, which is current flowing through the sensor even when there is no light falling on it. Dark current is primarily caused by the thermal stimulation of electrons in the sensor material, so keeping the sensor as cool as possible goes a long way to reducing noise.

There is cold, and then there is MIRI Cold

As stated earlier, Webb has four main instruments. Three of them – the Near Infrared Camera (NEARCam), the Near Infrared Spectrograph (NEARSpec) and the Fine Guidance Sensor and Near Infrared Imager and Slitless Spectrograph (FGS-NIRISS) – all operate in the near infrared part of the system. spectrum, as their names suggest. Near infrared is just below the visible part of the spectrum, around 0.6 to 5.0 μm. Sensors for these wavelengths use an alloy of mercury, cadmium and tellurium (Hg:Cd:Te) and require cooling to around 70 Kelvin to be usable.

For terrestrial near infrared telescopes, the cooling of the Hg:Cd:Te sensors is generally done with liquid nitrogen. On Webb, however, another option is available, thanks to the massive five-layer sunshade that protects the observatory from the fiery light of the Sun, as well as from light reflected from the Earth, which, thanks to the orbit of the telescope halo, is still in view. The layers of Webb’s Aluminized Kapton Sunshade are spaced such that incident IR bounces between adjacent layers and ends up radiating into space more or less perpendicular to the sunshade, rather than penetrating through the layers down to the sensitive optics on its dark side. The sunshade receives around 200 kW of energy from the hot side, while only allowing 23 mW to pass through on the cold side. This keeps the instruments located there freezing cold at 40K, which is cold enough for the three near-infrared instruments.

But as cold as 40 Kelvins above absolute zero may be, it’s still far too hot for the sensors of the fourth of Webb’s main instruments. The Mid-Infrared Imager, or MIRI, is designed to image and make spectrographic observations from 5 to 28 μm, which requires an entirely different sensor than its near-infrared cousins. Rather than Hg:Cd:Te, MIRI’s sensor is based on arsenic-doped silicon (Si:As), which must be cooled very close to absolute zero – less than 7 Kelvin.

In Webb’s original designs, the ultra-cold temperature needed for MIRI was going to be provided by a Dewar flask containing a cryogenic substance: solid hydrogen. The choice of a stored cryogenic system was made due to the immaturity of space active cryocooling systems capable of reaching 6 K at the time. However, Webb’s now infamous delays allowed cryocooler technology to grow, and in light of the weight savings that an active cryocooler offered, not to mention the ability to use MIRI longer – the instrument would be useless once the solid hydrogen had completely boiled off – the decision was made to replace the cryogenic Dewar.

It was not without engineering challenges, of course. Chief among them was the ability to reach the target temperature while meeting power and weight constraints, and not adding excessive mechanical vibration to the sensitive optics. These two specifications were particularly challenging given the sheer size of Webb and the physical layout of the observatory, which made it necessary to distribute the cryocooler assemblies over three different areas of the spacecraft, each with different thermal regimes at manage.

The hottest region, designated Region 3, is located in the space bus. It’s on the warm side of the visor, meaning it can expect to see temperatures up to around 300K. The assembly that is mounted in this region mainly consists of the cryocooler compressor (CCA) assembly and its associated control electronics. The CCA is the “pre-cooler” for the entire system, using a three-stage pulse tube design to achieve temperatures of approximately 18 K. Pulse tube cryocoolers have no moving parts to apart from the pistons used to generate the pressure waves, making them excellent for low vibration applications like this.

The pulse tube refrigeration process relies on thermoacoustics to transfer heat. In thermoacoustics, a standing wave is created in a working gas (helium in the case of Webb’s cryocooler) in a sealed tube. A porous plug, called a regenerator or recuperator, is inside the tube, near one of the nodes of the standing wave. As the working gas is compressed and expanded, a temperature gradient is established across the regenerator. The hot end of the pulse tube radiates heat into space via a heat sink, while the cold end is used to remove heat from a closed-loop heat exchanger, also charged with helium. The video below presents an excellent demonstration of the principle of thermoacoustic cooling.

Cooled helium, now at about 18 K, enters Zone 2, which is in the tower that supports Webb’s primary mirror. The temperature in this region is between 100 K and almost 300 K, and the super cold helium must pass through about two meters of tube to reach the instruments at the telescope’s focus. unwanted heat transfer.

At the end of its journey through Area 2, the refrigerant reaches the heart of Area 1 – the focal plane of MIRI itself. This area is already at around 40K thanks to the passive cooling steps described earlier, but to bring the refrigerant to its final temperature of 6K, it passes through what is called a Joule-Thomson valve. The JT valve uses the Joule-Thompson effect to further cool the helium working fluid.

Joule-Thomson says that when the pressure of a gas is reduced, its temperature is also reduced. It’s something we’ve all seen before, like when frost forms on the outside of an air bomb, or the cloud of water droplets that forms when an air cannon fires a projectile. in the air. In Webb’s Cold Head Assembly (CHA) inside MIRI, a special valve allows supercold helium pressure to drop suddenly, dropping it to about 6 K and cooling a copper block on which MIRI sensors are mounted. The helium is returned through the JT valve and back down the tube to the CCA, in a closed loop system.

So far, Webb’s cryocooler system achieves all of its goals and satisfies MIRI. At the time of this writingthe temperature at the MIRI focal plane held steadily below the 7 K setpoint for more than 14 days, with the other near-IR instruments holding well below their 40 K target. hoping that we will soon see the results of these instruments.

And just for the record, the coldest natural place in the solar system might actually be the “double shadow craters” of the south pole of the Moononly 25K away. Poor Pluto — never any respect.