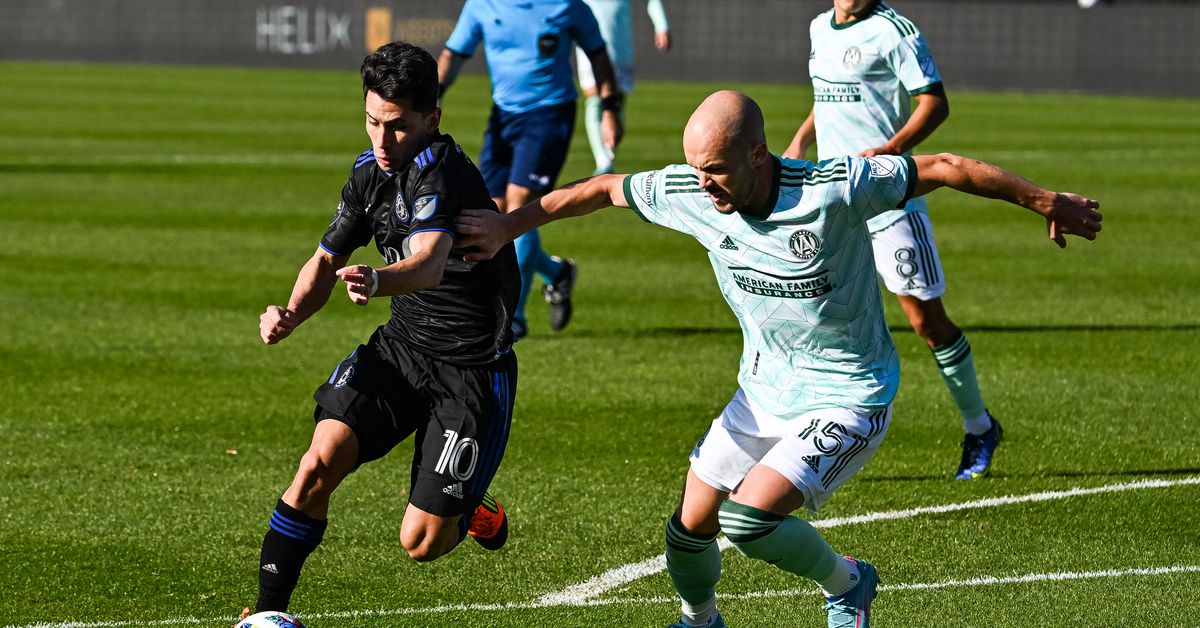 Andrew Gutman spits the truth every time he takes the microphone. Don’t misrepresent him, he’s not harassing the team, he’s going through exactly the same emotions as anyone reading this article. Frustration.

The degree of frustration among Atlanta United the fans and the players seem tenfold after games like the one that took place at State Saputo in Montreal yesterday. A 2-1 loss is another result that feels like a missed chance. The Five Stripes always seem to be one “adjustment” away from breaking free and turning their dominating possession into results, but that just hasn’t happened. From a fan/supporter/writer point of view, it’s almost worse than having a bad team; Atlanta has the majority of the battle won in terms of attacking football and they really look good playing from the back and moving the ball up the field. But that final ball just isn’t there, and so everyone is left with a lot of “what should have been” emotions.

If you don’t usually read most of the full quotes from Pineda and the players after games, this one may be the one you don’t want to ignore. I think it’s fair to say that Gonzo is probably the most frustrated of them all, and Andrew Gutman and Bobby Shuttleworth do an outstanding job of putting into words how anyone connected with Atlanta United feels. Appreciate their “reality” and glean what you want from the press conference, but when a locker room starts to get this frustrated, they tend to be either extremely good or extremely bad. The players love Pineda and they seem to have really bought into his system, so maybe that moment of clarity, that ‘aha’ moment, is coming? One can’t help but think that once that moment comes it will be glorious, but the current reality is that Atlanta seems to be sipping on a bottle of luck that has dried up.

Check out the quotes below and as usual, we’d love to hear everyone’s thoughts. What is the team changing/modifying/doing differently?

His thoughts on the game

“I think there’s some frustration, obviously, because of the result but also because I don’t think the team’s performance was one that deserved to lose the game. I think we certainly dominated the game. game we certainly controlled the game but we couldn’t finalize a good result due to the lack of final product in both boxes I think we have to do better in the very limited times where the opposition is in our box. We have to do a lot better. And the many times that we’re around the box, we have to create more. So, I think that’s going to be the focus this week before we prepare for Chicago, but we’re disappointed to have given a match which, once again, I think we should have won.

On the team’s problems defending from set pieces this season

“I think set pieces are a topic. It’s about focus, it’s about working as a team on a very specific game, but we also have to deal with the fact that many teams in MLS have guys who are taller than us. And we want to play in a very specific way and not really from set pieces, but there are certainly teams that probably have taller players attacking from set pieces and that’s hard to defend. I think the way we try to defend is not to concede a lot of set pieces, to have a lot of the ball in the opposite half, but the few that we allow every game sometimes become dangerous . I think we have to review, check why, sometimes also we have to give credit to the opposition. Their delivery was very good and it is sometimes difficult to defend these type of balls. I’m not counting on that much, but I think we can improve on that side.

“We have to check the film. I think now we’re obviously upset and frustrated with the result and it’s hard to make such an assessment when there are too many days until the next game. What we’re going to do is check out the movie. What we did very well, what we lack to get the results and then we will try to work through the week and find the best formation to face Chicago.

“I said that we had to continue with the same style, the same ideas. I felt we were very good at playing between the lines, very good at building and disrupting their pressure in the middle, which is not easy to do against a team like Montreal. It’s a very good team and it’s sometimes difficult to break. And I felt the team did it very well. After that, in the final third, I felt that maybe we weren’t sharp in the final pass, that we tried to race behind and really create dangerous chances for ourselves, but the few that we created we missed and that was the story of the game. So my message at halftime was just to try to keep going with the same style, with the same ideas, with a little more conviction. I think with Marcelino’s goal, that’s what the team did. We started to believe we were in control and it was just a little bit too many set pieces we gave and they picked up momentum which led to their goal.

“It’s kind of the same old story. I felt, again, that we were the best team by a mile, but we just died out for a few moments during the game. They score from a free kick, and then they also score, basically a recycled free kick. We play so well for 89 minutes. We are the best team. We keep them stuck. We push the tempo, create chances, all that. We go out just for a moment and it hurts us. I think, for us, it just completes a full 90 minutes. No mental failure, no mistakes and we will start to win.

On the team’s defense from set pieces

“I think it’s just a lack of fighting, a lack of mentality that ‘I’m going to win this ball over you. I will fight, push, fight to win the lead and clear the lines. I think that’s what’s hurting us right now because we don’t have enough attitude where “I’m going to get the ball before you and you won’t have a chance.”

On if losses like this wear down the trust team

“It’s so early in the season, there are only nine games. I think now we have to come together more as a group and become more of a family. We just have to fight for each other in those moments that the team is looking for in the game. We play a lot of teams, especially in this game, Montreal had nothing in attack. They were almost trying to play from set pieces and that was going to be their attack, because we controlled most of the game. I think we have to go back to what the badge actually means. We’re not a team that’s just okay to be in MLS, maybe make the playoffs, just play our game It’s Atlanta United, we want to play for trophies. We want to win trophies. I think it’s just the little advantage that we’re missing. We just have to motivate each other, let it be just by pushing each other to each other. train a little harder on the terra in. Cover for each other if someone makes a mistake. Things are going to happen in matches for 90 minutes, you just need to have your teammate behind you, if you mess up they’re going to cover you. I think once that happens, we’re gonna start shooting and we’re gonna kick off. I think it will be a completely different conversation at the end of each match.

On what happened on the goals

“On the first goal, we set our lines. A good ball whipped in the top of the surface. Set pieces are clearly something we need to work on and we work on it in training, we iron it out. Something we need to keep working on and fixing the issues. We are moving in a positive direction. But that’s for sure, it’s something that we must absolutely continue to watch and find solutions on the ground, because we train it. We need to do better in these areas. The second goal, I couldn’t comment too much on what happened. I should look back, I haven’t looked back yet so I’ll have to watch the video again and see.

On what games like this do for the team’s confidence

“These games definitely hurt. You’re not going to find a guy in this locker room who’s happy with the way things are going right now. We dominated long, long periods of play and possessed the ball for long periods of play. Unlucky in front of goal offensively and then conceding where it should not concede, we come away with zero points. It’s a long season. It’s the ninth game, so it’s positive the way we play. We create chances, we dominate possession. There are definitely positives moving forward. That being said, there are definitely things that we need to sort out, look at and keep working on in training and trying to fix those issues. Because at the end of the day it’s about winning games and the last two results we probably had the best of games and came away with zero points. Something must change there.

“Great on the ball, lands good spots, he’s aggressive, wins good tackles. I think for us at the back it’s about communicating as much as possible, continuing to try to help each other, getting good places and preventing teams from trying to hit us on the counter. It seems to be the way we play at the moment is that teams try to absorb our pressure and hit us on the counter. That being said, I think we did very well today. We prevented them from countering us at any time. I think he definitely did well. We expect him to play the ball well behind the back and continue to be aggressive.

As usual, if you have some time, tune in to our post-match Twitter Channels. Guaranteed you’ll emerge on the other side with a bunch of new takes or none at all, but either way you’ll have a blast.