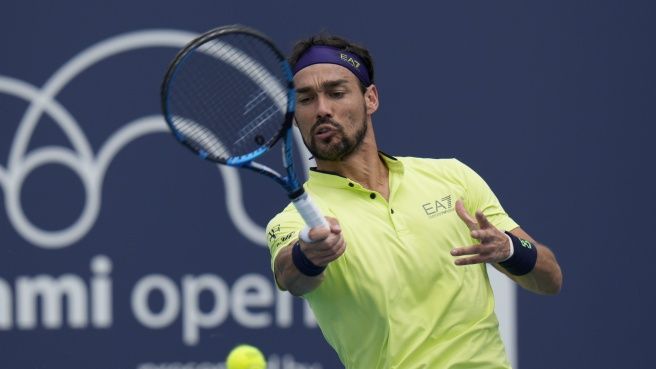 Fabio Fognini bows to a very strong, almost perfect Andrey Rublev. The blue loses 6-2 6-2 the semifinal of the ATP 250 in Belgrade in 1h and two minutes, he will be the n.8 in the world to challenge super-Djokovic for the Serbian tournament cup. The pitch was clear: Rublev was superior today, too continuous and consistent with his cross-country shots, and very precise with his serve. Fognini tried to enter his rival’s tennis, first playing at great speed but making too many mistakes; then varying more pace and trajectories, but the risks have not paid off. Unfortunately, he did not get anything with his service and never managed to score in response, tearing only a handful of points throughout the match and only break points at 2-5 in the second set, when the game was now compromised. A clear success for Rublev, he made almost no free mistakes and was relentless in response, always finding depth and precision that put Fognini’s tennis in crisis.

The game was very complicated, Rublev is one of the strongest players on the tour, especially in the 250-500 tournaments where he often becomes irrepressible arriving relatively “fresh” to the decisive matches of the tournament. Today Andrey’s constancy in pushing and strength seemed superior to Fabio’s arm speed, perhaps even a little tired (in the second set he seemed at times slightly delayed in finding the ball, also due to the depth and speed of the shots of the rival).

Unfortunately Fabio paid a clear gap in the shots at the beginning of the game, not finding points with his service and not being able to respond in an incisive way; on the contrary, the Russian’s response was insidious, continuous, insidious. This was decisive, but it also went down in the exchanges. Fognini had a real chance of succeeding only by managing to bring the Russian out of his favorite patterns: the rhythm pressing with the forehand from a slightly left “shot” position, where he loves to stand and push with an irresistible forcing at times. Unfortunately he was unable to vary without making mistakes. In the first part of the match he adapted to Rublev’s constant pace and speed, and that cruising speed few have hope. Fabio tried to build, but he made too many mistakes, especially with the forehand. He was unable to slow down and then suddenly tear with his changes of pace, to break the pressure of his rival, ending up overwhelmed at times or making too many mistakes to get out of that grip. In the second set he tried to raise the dish with the forehand, but he didn’t find precision, the same when he tried to tighten the corner on the backhand.

Today he is defeated, but remains a good tournament for Fognini, who gives him points and confidence in view of the next events on red. Very little is needed at “Fogna” to light up, find the best feeling with the court and invent signature tennis.

The second semi-final of the Serbia Open starts with Fognini at bat. Great pace with the forehand already in the first point, Rublev wins. The Russian answers precisely and deeply, 0-40, three chances to run away immediately. Fabio’s serve goes into motion, with three excellent firsts grabs a tie. 5 points in a row, the last a great attack with the forehand after an excellent diagonal backhand, and 1-0 Fognini. All easy for Rublev in his very first game, 1 all. The “Sewer” tactic is clear: move Andrey from his firing range, a couple of meters to the left, where he loves to hammer with his very fast forehand. You take risks for the blue, and make other mistakes that condemn him to another 2 break points. Unfortunately a double foul (second in the game) condemns him to BREAK, 2-1 and Rublev service. Fabio’s mistakes are too many, he looks for great speed with his shots so as not to collapse in defense, but Rublev is a “wall”, he doesn’t give anything away. 3-1 ahead of the Muscovite, with an excellent game at zero (partial 12-2). Unfortunately Fabio’s mistakes continue in an attempt to move Rublev to the right, like the backhand that costs him 15-30. Follows a broad broadside of Andrey, for 15-40. Cancel the first Fognini break ball with a good advance with the forehand; but he collects a line in response, the ball shoots away, almost uncontrollable, but the Russian is very good at finding such depth. Double BREAK Rublev, forward 4-1 and service, unfortunately the first set seems to have already slipped away. He breaks through with the forehand from the center, serves well, all too easy for Andrey, who closes 6-2 peremptorily with another first winner. 27 minutes of domination for Rublev, too solid and continuous. The Russian lost only two points in the service, unequivocal due to his superiority

Second set, Fognini to serve. The blue finds a good game, despite a double fault, 1-0. His problem is the answer, so far he has never managed to unhinge the service in response and then the forcing with the right of the rival. Only a really badly executed damping by the Russian concedes a point in response to Fabio. 1 even. Fognini risks so much at bat, now the forehand is less inaccurate even if played at very high speed, he manages to keep the exchange more, but still nothing in response. 2 even. In the fifth game, “Fogna” goes into trouble again. on 15 equal the blue plays a fabulous exchange, draws the field, but just sends off the attack with the forehand. Out of frustration, the racket flies off to the ground. Rublev guesses an incredible defensive right cross, which pinches the line and runs away. 15-40, two break points for the Russian that smell of match point given the progress of the match. Also a warning for Fabio, for abuse of the racket. Nothing, the break comes immediately for a right in the network of Fognini. 3-2 and Rublev service, access to the final and the challenge to Djokovic seems already one step away. Forward 4-2, Rublev again breaks the blue serve at 30-40, with a high backhand along the line that punishes a non-definitive smash by Fabio. 5-2, serves to close the Russian. Find a splendid winner with the backhand along the Fognini line, a ballistic beauty that is worth 15-30. A nice pressing from Fabio brings him to 30-40, the first chance of a break in the whole match. The Russian cancels it with a precise external first. Another break ball arrives, it seems a double fault but the chair judge corrects the call, the point is replayed and with the first serve and volley of the match Andrey closes the point. Maybe Rublev got distracted, he lost the first one and on the second Fognini affects, but he can’t even take advantage of the third break point (wide answer). Rublev closes the match at the second Match Point, with a backhand cross from “Fogna” that ends wide. Rublev hits the head to head with the blue on 5 equal and “gives” Djokovic tomorrow. A good tournament for Fabio, too bad for a performance today below his possibilities, but the opponent was really tough.