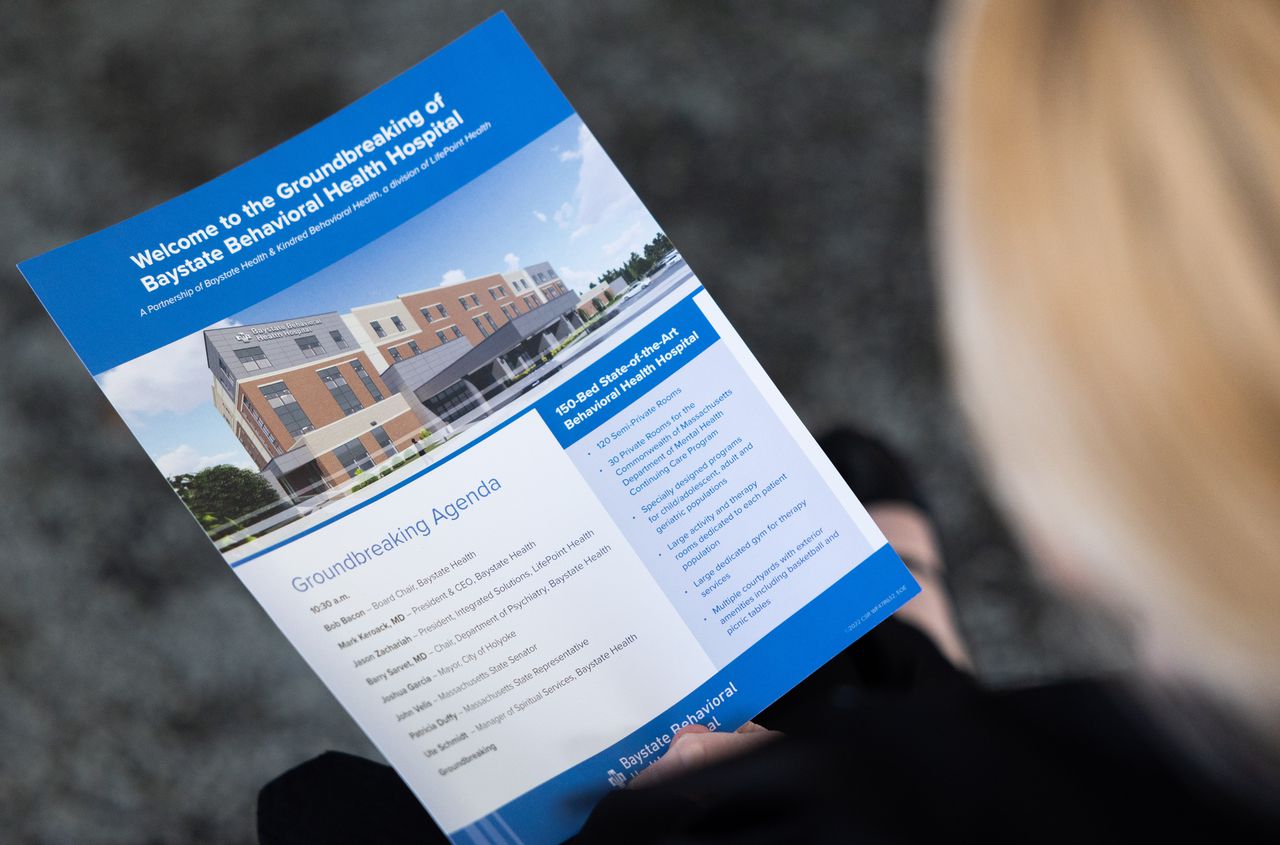 HOLYOKE — Baystate Health and his partner, Kindred Behavioral Healthinaugurated on Tuesday morning a $72 million, 150-bed psychiatric hospital they hope to see it completed by August 2023.

And it can’t open early enough, according to Dr. Barry D. Sarvet, chairman of the Department of Psychiatry at Baystate Health. Patients, especially children and teenagers, are still waiting up to weeks in emergency rooms for psychiatric inpatient beds to open.

This is a national shortage that has existed for decades, but worsened locally when Providence Behavioral Health in Holyoke closed its hospital beds for children and adolescents in 2020.

“Right now, we don’t have enough beds in the area to meet the needs of the population,” Sarvet said. “These are people who have acute psychiatric crises.”

Dr. Mark A. Keroack, president and CEO of Baystate Health, said there were 681 people statewide in emergency rooms waiting for a psychiatric bed on Feb. 28, the day most recent for which statistics are available. Twenty-eight people with seizures were waiting for accommodation in Baystate emergency rooms alone.

The new hospital would employ about 200 people, according to Baystate Health.

Baystate Health and its partner, Kindred Behavioral Health of Louisville, Ky., which is part of LifePoint Health, held a groundbreaking ceremony for the facility on Tuesday.

It will be located at 45 Lower Westfield Road – the site of the former Holyoke Geriatric Authority retirement home, which Baystate and Kindred bought from the city for $250,000 in 2020.

The Holyoke Geriatric Authority building was demolished earlier this year in preparation for site construction.

The authority closed in 2014 after years of financial difficulties.

For a time, the Gandara Center in West Springfield rented space for a program for low-risk young offenders, but left after a dispute with the city on the rent.

With 150 beds, the new Baystate Behavioral Health will include five units plus 30-bed wing care for those who need long-term treatment through the state Department of Mental Health, Sarvet said. . These five units themselves can also be split into two sub-units each if that works better for providing patient care.

Sarvet said the thinking about how to design and what to include in a facility like this has evolved in just the past two decades.

“We expect it to offer much more comfort, warmth and space,” he said.

The new hospital will also have gymnasiums and exercise areas in recognition of the growing research linking exercise to mental health. Patients will also have access to secure outdoor exercise spaces and gardens as well as therapy and recreation rooms.

“Those are hard things to offer in a general hospital,” Sarvet said.

Keroack said Kindred brought capital investment to the project, allowing Baystate to direct its resources to a number of projects.

This resulted in a modern and therapeutic design.

“For years, psychiatric wards were in a drab and austere setting,” Keroack said.

“I hope this is an example of how we can build back better, stronger and kinder,” Duffy said.

When the Holyoke facility opens, Baystate Health will close its regional hospital’s behavioral health inpatient beds: 28 at Baystate Wing in Palmer, 22 at Baystate Franklin Medical Center in Greenfield, and 20 at Baystate Noble Hospital in Westfield.

The Springfield-based healthcare provider will retain 28 beds at its flagship Baystate Medical Center in Springfield.

Sarvet acknowledged that these communities value the availability of these beds in Westfield, Greenfield and Palmer.

But the new facility, he said, with its specialist units will allow doctors to group patients appropriately. They will avoid, for example, putting a depressed and withdrawn person in a frame with a person who exhibits opposite behaviors.

And he said patients will have access to facilities like the gym, which are not present at a general hospital like Baystate Wing, Baystate Franklin or Baystate Noble.

“We are limited and constrained by the architecture of a general hospital,” Sarvet said.

And the new building alleviates the lack of space.

“It’s very common for people to show up at a community hospital and travel to Boston, Vermont, or upstate New York,” he said.

Due to its location in Holyoke, the new facility will only be a 20-minute drive from most communities in Baystate Health’s service territory, he said.

Baystate will also add video conferencing so families can keep in touch remotely while finding alternate transportation so people can also come and visit in person.

“We understand there’s no substitute for being there, for being able to hold someone’s hand,” Sarvet said.

Baystate Health chose Kindred over 20 companies after severing ties with its first partner, US HealthVest, following reports of problems at US HealthVest properties.

According to Sarvet, Baystate Health will accept all insurance coverage at the new facility and offers programs for the small number of uninsured Massachusetts residents.

When the facility opens, higher-level healthcare professionals — psychiatrists and other physicians and nurse practitioners — will be employees of Baystate’s medical offices. The nursing and administrative staff will work for the Kindred-Baystate joint venture.

“Kindred has a much stronger quality improvement quality management division and more innovation when it comes to ensuring good clinical outcomes,” Sarvet said.

Holyoke Medical Center withdrew his proposal for an expanded behavioral health facility in the face of looming competition from Baystate Health and because the state is unlikely to approve both projects.

Holyoke Mayor Joshua A. Garcia also explained how the new hospital will help Holyoke by providing more much-needed care. But he added that Baystate’s new hospital also solves the long-standing challenges of redevelopment of the former Geriatric Authority building. It will also provide work for local construction trades, he said.

And the facility will also generate $1.5 million a year in tax revenue for the city, Garcia said.

“And I can’t take credit for any of this,” he said, thanking the city’s economic development and planning departments. “It’s nothing I can do in the three months since I took office.”

CMA Constructionwith local offices in Waltham, is the general contractor.

Schools Going through Psychological Well being Disaster, Here is What The Bachelorette’s Zac Clark Does About It