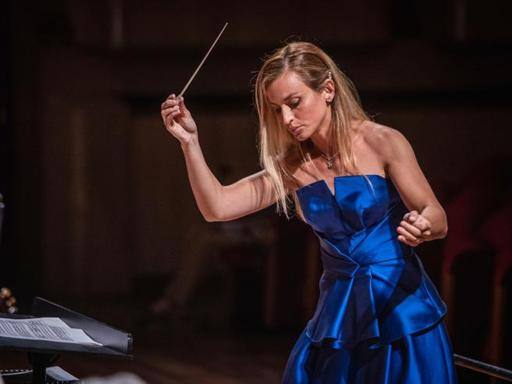 “I’m the crying type, yes. When things go wrong at first I get discouraged, shedding tears for three days. But then I start off again: when they refused my admission to the Giuseppe Verdi Conservatory in Milan, for the first time, I said to myself: Beatrice, ok, wait a year, get ready, you know there are only two or three places in the conducting class. Do your best and … “

“The emotion must have played a bad joke on me. A second time. I was probably not ready for what the commission expected, it was a question of maturity. Having to wait another year was tough ».

Beatrice Venezi will also have been rejected, will have cried, will have waited. But at 25 he was the youngest conductor in Italy. And she too is the most envied and exposed in the media.

«You pay for the exhibition, however, especially if you go to Sanremo: a lot of visibility but also a lot of criticism when the question came up that I wanted to be called director and not director, in addition to the sexist observations. But above all for having decided to participate in such a “pop” program: they put you on the cross for life for having “contaminated” the purity of high music. I see so much wickedness and so much bad faith ».

When did you first confront the problem of gender difference?

«I was studying with Maestro Piero Bellugi, a character of incredible humanity. Once, after a lesson, we were alone: ​​he had never dealt with the issue of gender difference. I was lulled into the idea that there was no difference, I had never asked myself the problem that there were no female directors. He told me that he had talked to one of his sons, who was involved in circus arts, who had asked him if female hands could be more expressive than male ones in his direction. A key moment in the formation of my safety ».

Then he slammed his face against it.

“In fact, at the Verdi Conservatory in Milan they didn’t give me the same opportunities they gave to males. It was a continuation of sexist jokes, even at the Accademia Chigiana. Things like “she’s a woman, what do you want me to do?” or it was pointed out that I could not dress in women’s clothes as if I had to look like a man. I believe it is the will to make small copies of the teachers of their students ».

«It is the difference between a teacher and a teacher: a teacher is who gives you the possibility to express who you are. But there were no female models to refer to, even just for body posture. Because the differences in the body between men and women affect the direction “.

Your first time on a podium?

«At 22 and with a lot of emotion on him. Even if that “magical tranquility of the podium” enveloped me as soon as I started. It is something that I still cannot explain today: whatever restlessness you feel, it always remains in the dressing room. I was in my Lucca, at the Basilica of San Giovanni, directing The Eroica. In name and in fact ».

At the time, had the problem already arisen of being “a director and a woman” who then accompanied you this far in your career?

“I think it was the only time I didn’t feel that disapproving look on me. Perhaps precisely because I was surrounded by countrymen ».

«I danced and hummed even in swaddling clothes. Or at least that’s what my parents say ».

Was she a child prodigy?

“A little girl who moved awkwardly. But music, the expression of rhythm through the body, has been a part of me since a very young age. First with the dance, then with the piano ».

What memories do you have of the piano at the beginning?

«A vague image of the little hands above the keys, as if in my eyes a secret was disclosing only for a few. Yet that was not the instrument of my desires. “

«I felt I wanted to start with something more rhythmic and primitive like the beating of the heart, in fact I was fascinated by percussion».

Already at the cheeky, “tribal”, fierce era as we see it today at thirty?

«Not at all: shy, introverted. Quite the opposite of what it may seem now. I was fascinated by a language, music, not bound to the words that pigeonhole everything ».

«A characteristic that I brought with me: in Avignon the first clarinet came into the dressing room and told me that he had lost two children but that thanks to people like me he continued to do this job. And we embraced ».

Empathy. Despite so much mistrust.

“Already. As I often think of a lady from the Bolzano Orchestra who got up from the row of cellos, she stopped me in the corridor and said: we were told that she was just a media personality and for this I was prejudiced against her. Instead, thank you: this is the last production in which I participate before retirement, and it is a pleasure to have been able to change my opinion “.

So even the most difficult obstacles can be overcome. Now it’s up to sexism.

“I never got over that. But traveling and learning about different cultures helped me. In France, no one notices whether you are a man or a woman, only if you are good or not orchestra chef. Point”.

To put it to Frankenstein Jr …

“It can be done. But you see the differences. With the Clermont-Ferrand orchestra in Auvergne and with the Avignon Provence orchestra it’s all a laugh and a joke, but we work hard. In Italy, on the other hand, it almost seems that culture is developed only if you remain serious, woe to laugh or have fun. There is this idea that if you are not “boring” enough it means that what you do is not serious “.

Italy has always been a step forward in music, but are we still behind on the socio-cultural level?

“In the academic world they still point to me as if I were a ‘commercial product’ of entertainment and turn up their noses. As if I were a bluff by force, a continuous “not enough”. It doesn’t happen abroad ».

The fact that she is also very beautiful perhaps does not help… to overcome certain prejudices.

“Being beautiful is a problem. In people’s eyes you read a kind of “you broke up huh, do you want to be prepared, beautiful and successful? It’s too much, you can’t “. To do it I have to be much more prepared than a male colleague. “

«In Cagliari, on my debut in a high-level opera foundation. That is a renowned and quality orchestra, but not easily malleable, you have to conquer them with sweat. And until the previous performance there was not even an audience, for fear of Covid. Then it was our turn and the audience was full: it is the moment when I felt the taste of victory for the first time. Especially afterwards, in the dressing room, with the musicians who came to me to say “we can’t wait to have you back with us” ».

And when is she forced to go to battle?

«It happens with some first violins, those who dream of being conductors and can’t. I think back to the beginning of 2020, when a violinist by name, from an important orchestra, addressed me in such a paternalistic way as to say “don’t worry, I think I’m a man and I’m bigger than you”. I could let him and stay calm, losing authority. Or go to the counter. My vein closed and I wanted to eat it. But a director must never transcend, authority is not shown by raising one’s voice. Keeping his cool while he tried to provoke me got him mad: he got up and walked away. I continued to work with others who came to apologize for him. I had brought the rest of the orchestra from mine, marginalizing the harassing subject. He had a hysterical crisis, I a concert ».

Is there only music in your life?

“I have a partner, Juan, and we are thinking of expanding. But keeping work and family together will be a challenge. Not all men are ready to accept that I am absent for long periods and no matter how open-minded we are, certain role reversals are not easy to accept. But I was lucky ».

You can be a good mother and a good professional together.

«I still have in my heart a singer who during the Manon Lescaut at the Goldoni in Livorno in 2017 he told me: Beatrice, you will certainly be a good mother, you can see from how you take care of us and the orchestra “

. Does Juan help her overcome all the obstacles she finds in her job?

«He knows the rituals of orchestras, he deals with economics but has become a keen observer of the dynamics between artists, he knows how to perceive the air inside the rooms. He tells me: he always starts with a “but what does he want this?” to switch to a “she might be fine but she’s still a nice woman, so she’s not fine” and end with “insist and insist, you got them”.

If you want to stay updated on the news from Florence, subscribe to the Corriere Fiorentino newsletter for free. It arrives every day straight to your inbox at 12 noon. Just click here