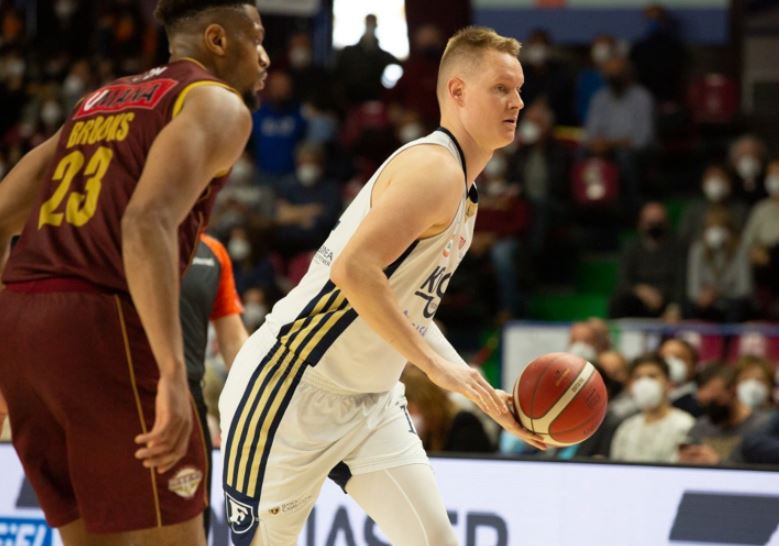 Robin Benzing was heard from “5 Questions to…”, the column of Legabasket curated by Filippo Stasi.

You are returning from the great home victory over the Dolomiti Energia Trento last Sunday, which keeps Fortitudo Kigili Bologna in the running for salvation. You were the best scorer of the game and you are one of the leaders of the group, thanks to the experience accumulated over the years. When you look your teammates and coach Antimo Martino in the eyes, do you see the right determination to reach the goal?
I believe that Fortitudo has a valid chance to stay in the top flight and save themselves in these last games. The victory against Trento gave us confidence, it represents a good step forward to face the remaining three challenges with the right spirit. The trip to Varese awaits us, it won’t be easy, but we have to break the two points. The last two away games to Venice and Pesaro, before the victory at PalaDozza against Trento, left a bad taste in our mouth because we were close to winning. Above all against Pesaro, a defeat of only one point that we would not have deserved considering the performance … But we are focused on the near future: Varese next Sunday and finally two games at home, against Naples and Reggio Emilia. Each of these will be faced as if it were a final. We want to win in Varese and then make use of the support of PalaDozza to get results even in the last two challenges. I’ve never played for such a special audience in my career. Maybe only during my season at Besiktas, in the Istanbul derbies, there was a similar, electric atmosphere… But the Fortitudo fans are special and we missed them in the first part of the season, due to the restrictions. A full and warm PalaDozza will certainly help us to play our chances of salvation to the fullest.

As mentioned, you are a veteran of European basketball and have spent several years of your career in the Bundesliga. Then the experiences abroad in Zaragoza, Istanbul and today Bologna. Did you find any particular differences between the German and Italian championships, for example?
Not that many to be honest. Personally I think they are similar, two leagues where you tend to play athletic and high-tempo basketball. Most teams choose US players to complete their overseas department in the summer, so their explosive physical qualities and incredible instincts are often relied upon. For what was my past in Liga ACB, it was more common to find teams that were structured and used to playing basketball where the tactical component was more prominent. This again for an organic matter: in the Spanish league there are American players but in a lower percentage than in other European leagues. A more reasoned basketball is therefore played, being able to count on several European-trained players, already prepared for certain readings and aspects of tactics that in the USA are not stressed with the same attention. The Italian Serie A is however very stimulating, I am happy to have accepted the proposal of Fortitudo Bologna and to test the goodness of the Italian championship.

You already have a dozen years among the professionals behind you… Was there a coach who helped you more than others to become the player you are today? And what was the greatest joy of your career instead?
The coach who best exalted my characteristics was undoubtedly Dirk Bauermann, who trained me during my year in Wurzburg in what was my last season in Germany. I found myself splendidly with him because not only did he leave me freedom in taking offensive solutions that I have in my ropes, but above all he always managed to put me in the ideal conditions to be effective, I was inserted
perfectly in team mechanisms. Statistically it was by far my best season in my career, but also on a team level it was great, we missed the qualification for the playoffs by a hair on the last day … While the greatest satisfaction I would say was winning the final of the pre-Olympic tournament in Split, last July, against Brazil. Getting the pass for the Olympics was at least as exciting as living the Tokyo experience. Playing for your national team is always great, but reaching certain goals that are perhaps a little unexpected makes you even more proud. In second place I put the victory of the German championship, in 2014, with Bayern Munich.

You talked about how much you like wearing the Germany tank top and with the German national team you have climbed 150 appearances in your career, from 2009 to today. You then mentioned Wurzburg, a German city known by basketball fans all over the world for being the birthplace of a legend called Dirk Nowitzki. You had the opportunity to play with the former Dallas Mavericks champion, your compatriot: what can you tell us about him?
Dirk Nowitzki has been my idol since I was a boy. Together with Kevin Durant he is an inspirational model to try to improve my game in the two wing spots, I have studied a lot both. I was lucky enough to play two European Championships alongside Dirk, in the summer of 2011 – a few weeks after winning the NBA title with the Mavs he was retiring with us in Germany – and in 2015, at his last waltz with the national team. On both occasions, among other things, we faced Italy! In any case, Dirk has always placed himself on the same level as any of his team mates, without ever asserting his status. His personality is friendly, he jokes with everyone… Dirk is special precisely because he behaves like a normal person, even though he is a legend. In the two summers I spent with him, I can’t tell you how many times, at the end of training, I challenged him to a shooting competition … I don’t think I’ve ever won one! Otherwise I would remember it well. I consider myself a good shooter, but nothing to do against him. What he did in his career, playing 21 years in the same NBA franchise, becoming the sixth best scorer in NBA history, the only European player to make it into the Top 25… What are we talking about? I am simply honored to have been able to share the parquet with a champion like him.

After looking back with a focus on Wunder Dirk, one last question about your current teammates at Fortitudo: can you tell us who’s the funniest in the locker room?
It is not easy to name just one name: Jacopo Borra is super, but we are all nice guys. Gabriele Procida also makes us laugh out loud! On top of that, I’m his roommate on away matches, so I can say I know him pretty well off the pitch. On the parquet the rest is under the eyes of all his incredible talent. I think he has made some significant progress over the season, he is a very humble guy and works hard to get to where he aspires as soon as possible. He seems to me very focused on his path. He is a prospect that the NBA scouts themselves are monitoring with interest and over time, if he continues to work as he is already doing, he will be able to measure himself at that level. I can only wish him the best for his future of course.