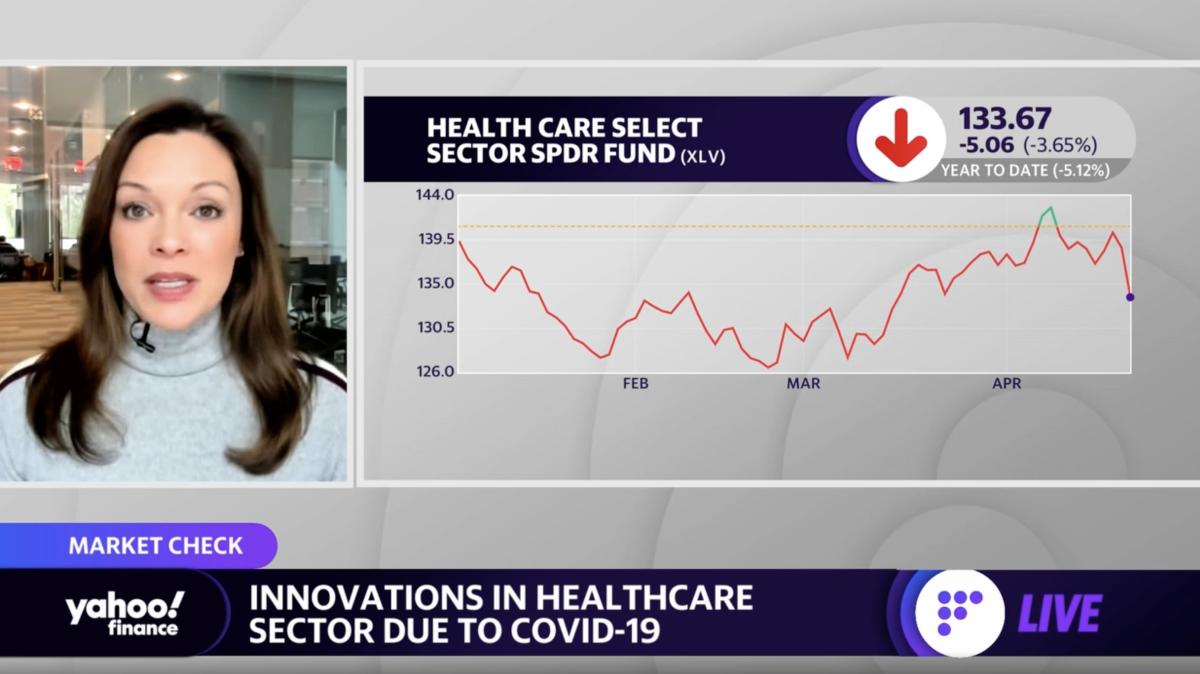 – Finding long-term growth sectors could be the key to outlasting rising interest rates and falling stock prices. That’s according to our next guest, SoFi head of investment strategy Liz Young. Liz, always good to see you here. Let’s start on tech. Tech has really been battered over the last few weeks. Now we’re all– all eyes are on this Apple report later in the week. But do you take a flyer on tech into that Apple report?

LIZ YOUNG: Well, tech’s actually been battered under the surface for the last few months, and there are some opportunities in the space. And here’s what I would tell investors to do– when there’s volatility in the market, it makes us very short-term focused. It makes us only be able to look out about 30 or 60 days, and we can’t really stomach anything further than that.

But what you can take advantage of is when you have those short-term dislocations in longer-term themes. And some of the places that I would look particularly in tech are things like cloud software, cybersecurity. Big tech is also always a good spot to have an allocation to. It is the stock market, and it is the future technology, is the future of the American economy. So even in short-term dislocations like this, there are spots where you can be gobbling things up.

– And, Liz, in your note, as you talked about gobbling some of these things up, you point out the time horizon is really important here. Do you think, in general, that investors get too caught up in short-termism, and they really need to focus more long-term?

LIZ YOUNG: Oh, absolutely. We all do, right? Even investors that have been doing this for years and years, professional investors, we have to fight our instincts to run for the hills when things get a little spooky. It is really easy to get caught up in that short term, but you have to watch the statistics. Think about things like the best days in the market typically happen within 30 days of the worst days.

So when we have a day like Friday, where you’ve got indiscriminate selling, there’s nowhere to hide. And when we’ve got futures opening down again today, it never benefits you to sell after days of indiscriminate selling. Just let it play out. The only way out is through. And then on the other side of it, when things level out a little bit, that’s when you start to make moves. But right now, it’s not going to be in anybody’s best interest to chase this on the downside.

– Uh, Liz, so far, a lot of these companies reporting earnings, the companies that have [? beaten ?] on earnings are not really getting a lot of love, I would say. How big a red flag is that?

LIZ YOUNG: Well, this market is really hard to impress, and the macro environment has made it really hard to impress. And I think that’s pretty natural given where we are with the state of rates, the state of inflation. What we need in earnings season in order to see upside is that companies not only just meet. They have to beat, and they have to guide higher. I don’t know that we’re going to see a ton of higher guidance.

I think we’re going to continue to hear from companies that they’re uncertain about the rest of the year. They’re uncertain about consumer spending. We’ve started to hear that from CEOs. We’re not sure how inflation is going to bite into the consumer, so we’re being cautious. But so far, with 20% of the S&P reported, the earnings are going pretty well, and we’re expecting 7 and 1/2, 7 to 7 and 1/2 earnings growth for the first quarter, and profit margins are still at all-time highs. So think about the strength that’s still under the US corporations. There’s not a reason to run for the Hills here.

– And as you look for other places maybe to nibble here– or gobble, as you say with regards to tech– health care is another area that I know you find attractive. And it’s interesting it’s health care sort of traditionally was known as a defensive space, but it’s become less and less so because of the sort of various [? growth ?] subsectors there. Are those the areas that are more attractive to you?

LIZ YOUNG: Well, I think health care as a whole is attractive. When you look at large-cap health care, that’s usually what we think of as traditional defensive spaces, and I still think that it’s good to have an allocation there. When you think about biotech and pharma, many of those companies fall in the mid to smaller cap space, and that is a growth opportunity. This last pandemic changed our health care system forever. It also sped up the marriage between health care and technology. So, again, that’s one of those longer-term themes that I think is seeing a short-term dislocation, and it’s an opportunity.

– Liz, I wrote this morning in our morning brief newsletter that, uh, all this recession talk is goofy. Do you think it’s goofy?

LIZ YOUNG: Well, it’s not goofy. It’s something that I think we have to fall back on, and we continue to look at signals that were later in the cycle and that a recession is coming. But the reality of it is where the economy is right now, a recession isn’t coming tomorrow, and a recession isn’t coming next month. So you have time, especially in the market. And be clear about what the signals are telling you right now. We’ve got a very, very tight labor market looking to even get more tighter as the months go by.

We’re not going to go into a recession with the labor market that tight. We still have manufacturing PMIs in expansionary territory we have leading economic indicators still growing. We have a consumer still spending. As I mentioned, we have profit margins at all-time highs. We are not showing signs of a recession any time soon. Recessions are a natural part of the business cycle. If it takes a shallow and brief recession at some point in 2023 to fix the inflation problem, so be it. Again, that’s a natural part of the business cycle. We come out on the other side in a more balanced situation.

– So then, Liz, should investors just be ignoring some of these calls? If we’re not going to get a recession until early 2023, mid-2023, it doesn’t sound like you should be building your portfolio around that.

LIZ YOUNG: Well, yeah, you don’t position the portfolio for a recession a year before it might happen, right? Because then you miss out on the other opportunities in between. But you don’t ignore it. You can’t ignore any of the risks as an investor. But what you can do is start to build positions if you haven’t already in some of those traditional defensive areas, that as we continue to have volatility through spring and summer, they’ll do better.

So think about things like staples, they’re a little expensive right now, but it’s still OK to have them. Staples, utilities, even think about adding positions and treasuries here. Treasuries have sold off much more than stocks this year, and I think that there’s a chance that the Fed backs off of this super hawkish narrative, and you see a little bit of a rally in treasuries. But also maintain positions in those opportunities spaces, maintain positions in some of that high-quality growth area, and maintain or build positions in the spots that we talked about before for the long term.

– I have a bit of a left turn for you, Liz, if I may. Being now at SoFi after you were at BNY Mellon for several years, I’m just curious how you’re framing these sort of thoughts about market strategy and the recession a little bit differently than you might have given the sort of customer base now.

LIZ YOUNG: Yeah, I mean, that’s a great question. The customer base has changed for me. The audience has changed for me, and I’d be lying if I said it doesn’t affect the way that I view the world. And you have to look at what’s coming down the road rather than what’s happened before. History is a guide, but you have to think about the future of the consumer and the future of what people want.

So I’ve obviously transitioned into more of a FinTech space. And I do think that there’s going to continue to be disruption in the traditional finance world, and it’s going to continue to be reflected in some of the market areas. Now right now, obviously, that space is not being rewarded, but financials, traditional financials, aren’t really being rewarded either. So this is a tough area no matter where you are in the financial system. This is a tough time in the market.

– Yeah, I know you’ve been there for a little while there, but I just was curious how your thinking had evolved. Thanks so much. Thanks for being here. Liz Young, good to see you, SoFi head of investment strategy.