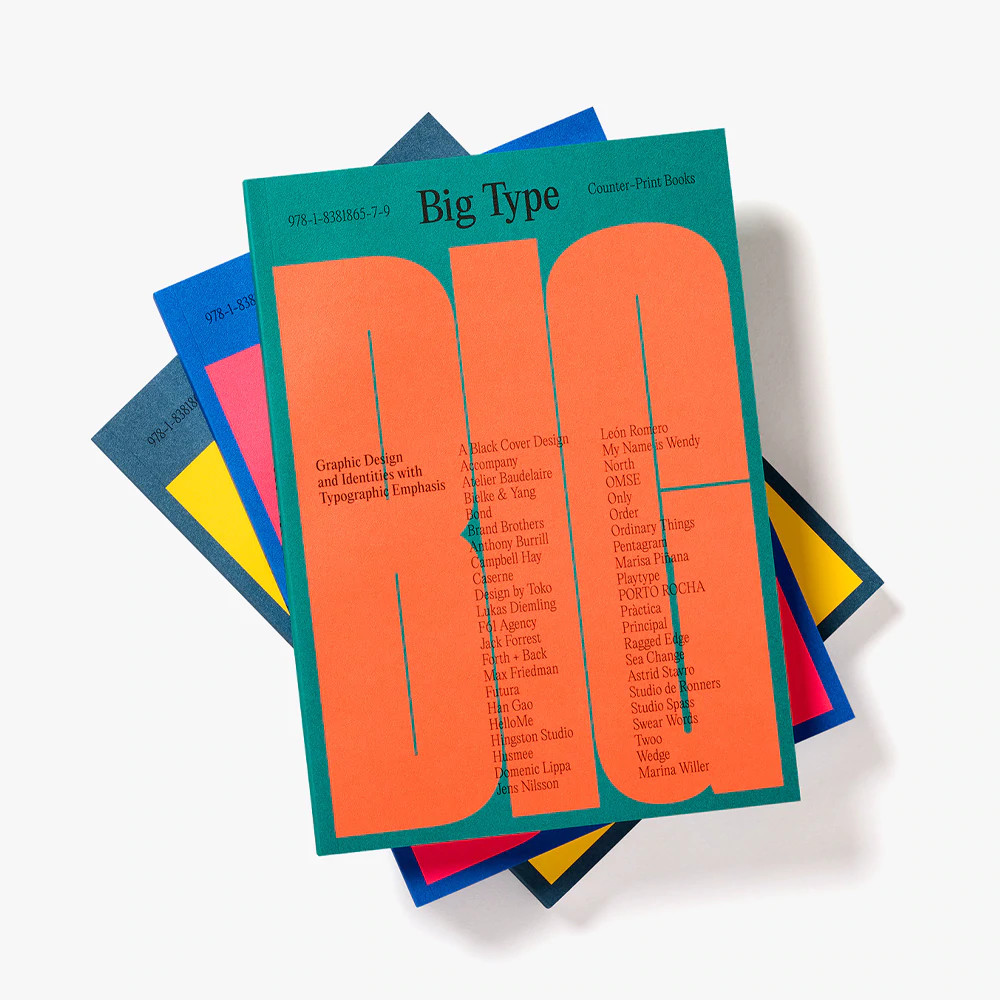 Courtesy of Counter-Print – British independent publishing house and online book and magazine shop – we publish the introductory text of Big Typea new book that explores the current graphic landscape by putting at the center of its research those projects that mainly revolve around typography, collecting the works of dozens of designers and studios, complete with interviews and information on the projects.

The preface is signed by Jon Dowlingfounder of Counter-Print together with Céline Leterme.

Over time, the alphabets and letters that constitute them have been the communicative devices of society, responsible for the creation of professions such as that of the scribe, calligrapher, typographer and modern graphic designer. The purpose of these alphabets is to give a visual structure to experiences, memory and abstract thinking. It is a standardized set of basic symbols, in written form, which represent the phonemes of some spoken languages. Likewise, a typeface is the design of the lettering, which can include variations such as theextra boldthe boldthe regularthe lightL’italicthe condensedL’extended, etc. Each of these typeface variations is a font. Today, when looking for a typeface, the graphic designer may have a general style in mind or be grappling with the endless search for what he believes can “speak” with exactly the right tone of voice. In both cases, the typeface is chosen for its graphic expression and is often subject to the trends and fashions of the time.

The graphic designer’s use of typography changed dramatically over the course of the 20th century. The clean lines and asymmetry of the 1920s, associated with the De Stijl and Bauhaus periods, led to a proliferation of fonts sans-serif which have had an impact on design that reaches up to the present day. Significant factors in the spread of this style were the enormous strides made during the postwar years, and the influence that means of transport and television had had.
Parallel to this, we have seen a growing separation between the visual appearance of typefaces, as we see them, and their structure, as the typesetter would have seen it. This was facilitated by the transition from printed characters to photographic compositions and then to digital reproduction techniques. Such a rapid change has resulted in a graphic landscape that would have been unrecognizable to anyone who lived 100 years ago.

In the 1920s the role of typography was to solve reading and visual problems. Today font design, influenced by both technological advances and the dizzying array of 20th century art movements, has acquired a freedom – in terms of composition, size, emphasis, color, weight, spacing etc. – which would have previously been inconceivable.
Of course, this evolution does not necessarily presuppose that the characters no longer have to be legible. The modern graphic designer still needs to have respect for what the function of reading is. As the master typographer Emil Ruder said, “the printed word that cannot be read becomes a product without purpose”. However, modern typography must capture and hold our attention, ask us to solve visual puzzles, give us pleasure and, at the same time, convey a coherent message.

The increased importance of typography as a global communication tool is partly due to the fact that the information we hear can be easily forgotten while visual experiences – read and understood – can leave a more permanent impression. We certainly live in an age where some effort is required to catch our eye, where ideas and products are perpetually competing for our attention.
Technology has become central to our lives. While a few years ago the graphic designer’s activities were mainly limited to the creation of posters, advertising, packaging, signage, etc., the work of the modern designer has now expanded to encompass virtually every field of visual representation and design.
Paper has been partially replaced by digital screens, extending the advertising space from static to animated dimensions. Meanwhile, fonts are no longer tied to a single color, they can animate, while variable fonts allow you to generate custom styles from a single file. From the perspective of the brands, all this has translated into visual identities that have transformed from static to dynamic, with much richer communication possibilities than those previously offered.

The visual landscape that today’s designers are contributing to is very messy, and the digital world alone is so vast that it is sometimes difficult to make your voice heard amidst all the noise. We are surrounded by messaging, which – whether it comes from the phone in our pocket, digital billboards, tablets or desktop screens – is gradually taking the form of digital advertising. However, these are messages that usually arrive without audio, so typography can be essential to communicate.
This is perhaps the reason why, as can be seen in this book, today we see so many digital works, brand identities and advertisements focusing on typography. Characters give direction, they are stuff to play with, they are subtly animated and placed at the center of the projects themselves to celebrate their intrinsic beauty. These are projects whose power and persuasiveness are aimed at passing through the visual noise we encounter every day and communicating a message, eliciting a response or launching a call to action.
This is achieved through the use of fundamental principles of graphic design such as scale, repetition, dominance and emphasis of the elements, which can influence the meaning, tone and overall composition of a project.
They are responsible for creating a visual hierarchy between elements of graphic design and can help inform the audience of what to watch, in what order, and what is most important to focus on. They can help tell a story, create a visual journey, represent rhythm and movement, account for similarities or even change perspective and create whimsical or surreal scenes.

The works shown within this book represent an important and fascinating direction in typographic design. I’m thrilled to see where this collision of technology, typography and trends will take us in the future.
It has been an immense pleasure to be able to take a look at what will be the next wave of innovations in typography design, and examine how designers can produce works that stand out from the rest. Finally it goes without saying that, for a book like this, we are obviously deeply indebted to everyone who helped work on Big Type and they agreed to be interviewed. We thank you all for your time, support and talent.

Big Type it is made up of 224 pages, full of projects.
Yup buy online and you can choose between three different covers.