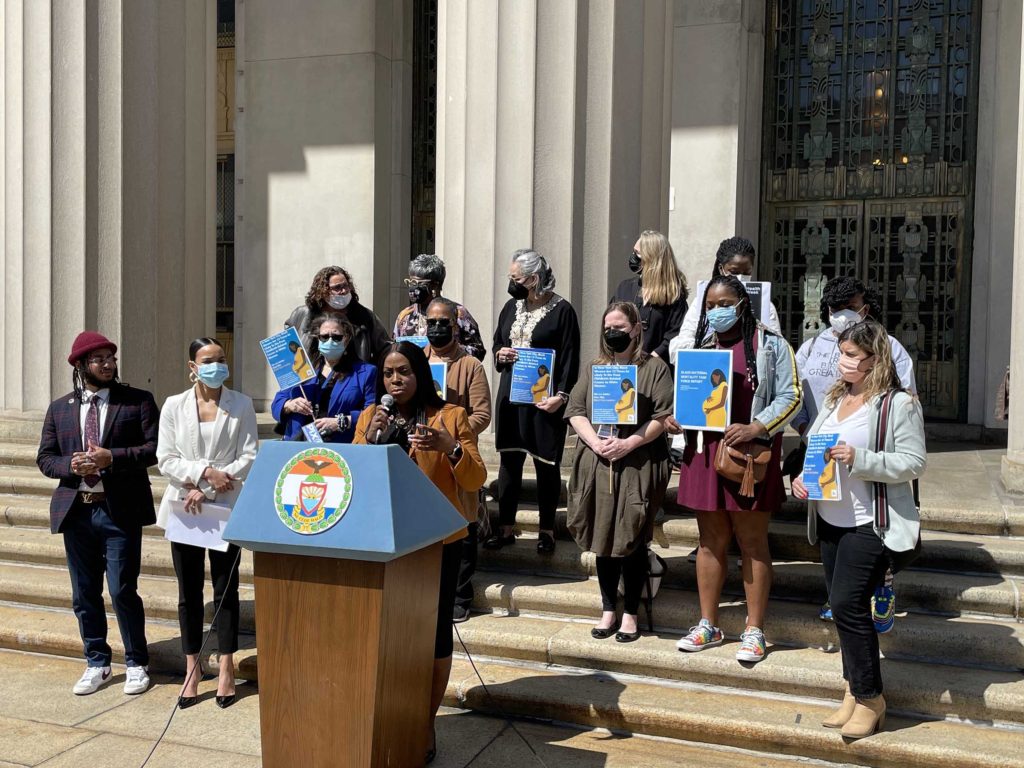 To mark Black Maternal Health Week, Bronx Borough President Vanessa Gibson joined a host of mothers and advocates fighting for access to safe childbirth support on the steps of the Bronx County Courthouse on Wednesday, April 13. The group came together to demand policy changes at the state level. to combat the high rates of maternal mortality and morbidity observed in the district.

According to data released by Fatoumata Diallo, a city researcher for the New York City Department of Health and Mental Hygiene, the Bronx had the highest rate of severe maternal morbidity (SMM) among the five boroughs. to April 11. Moreover, as reported recently by Norwood News, the same day, The city’s health commissioner, Dr. Ashwin Vasan, recently said: “In New York, on average, the rate of pregnancy-related deaths is 9.4 times higher for black mothers than for white mothers. .

The health commissioner was speaking during the reopening of the family wellness suite at the Tremont Neighborhood Health Action Center, located at 1826 Arthur Avenue in Tremont, which had been closed for in-person services amid the pandemic. He added, “It’s still one of the most glaring inequities we see in any health outcome in our city, and those outcomes aren’t driven by race, they’re driven by structural racism.”

At the April 13 event at the Bronx County Courthouse, Gibson spoke about the lives lost to pregnancy complications, saying, “I think about failure. We let some of our mothers down and they died in childbirth,” she said. “We owe it to them to keep going and make the future different.”

Its goal, according to the Centers for Disease Control and Prevention (CDC), is “to draw attention and action to improve the maternal health of black people.” Through her research, Diallo found that non-Hispanic black women in New York City had a maternal morbidity rate more than 2.5 times higher than their white counterparts.

Gibson shared that one of her goals as borough president was to provide a birthing center for mothers in the Bronx. “Delivering a baby in a birthing center gives our black women a different experience,” Gibson said. “These facilities provide culturally appropriate care and demonstrate an understanding of traditional birthing practices in our BIPOC communities and allow family members to be present.”

Bruce McIntyre III is the founder of Save a Rose Foundation and understands better than anyone the importance of medical care tailored to the specific needs of patients. His partner, Amber Rose Isaac, died while giving birth by emergency caesarean section. Since then, through the work of the foundation, McIntyre has been advocating for self-help and midwifery birthing centers.

He said that due to his partner’s high risk during her pregnancy, they were unable to give birth at home with midwives. “And we couldn’t give birth in a birthing center,” he said. McIntyre said the couple was therefore forced into the medical system and his partner ended up dying in hospital. Their baby survived.

Gibson went on to describe the ongoing actions her office is taking to address the problem of black maternal mortality and morbidity in the Bronx. “First, we are re-establishing an important borough-wide organization, the Bronx Maternal Health Consortium,” she said. “And through our longstanding partnership with the Bronx Health Link, we will provide the borough with a network of doula services as well as pre- and postnatal education to support Bronx mothers at the highest risk for pregnancy. health.”

A doula is a woman, usually without formal training in midwifery, who is employed to provide counseling and support to pregnant women during labor. Gibson then outlined the Bronx Maternal Health Consortium’s three main policy recommendations. “New York should establish doula coverage throughout New York State, permanently, and increase the reimbursement rate to match our peer states,” she said.

In March, Mayor Eric Adams released his administration’s plan to address maternal mortality and morbidity in New York City, announcing the citywide expansion of the doula program, the expansion of an initiative of midwifery and the expansion of a maternal health care service program. The citywide doula initiative will provide free access to doulas for families in labor and will focus on 33 neighborhoods with the greatest social need.

The midwifery initiative will be extended to the city’s 38 public and private maternity wards and will allow the city’s health department, for the first time, to collect data on births and care with midwives; build partnerships with midwifery organizations, private practices and community members; and produce a report on midwives in New York. Meanwhile, the Maternity Quality Improvement Network (MHQIN) will be extended to all 38 maternity hospitals in the city with the aim of improving maternal care at local hospitals and birthing centers.

Gibson praised the plan, saying in part, “Our city’s women of color deserve access to quality, patient-centered reproductive care before, during and after childbirth. We continue to lose too many mothers to preventable diseases maternal complications that could have been avoided had they had the support of a doula or midwife.

She said she believes Adams’ plan is a step in the right direction to dismantle years of systemic bias and racism in the healthcare industry. “As the borough with the highest maternal mortality rate in New York State and the only one run by two women, this issue is personal to us,” she said. “I’m grateful that we also have a partner in town hall who will work with us to tackle this issue.”

Myla Flores, a Bronx-based doula, then talked about her new initiative, the Womb Bus, a mobile community health and wellness center. “We need to provide families in Black and Brown communities in the Bronx with immediate access to quality maternity and reproductive care,” she said. “We know we need to solve this problem by coming directly to communities, posting and asking families to come forward with information and resources available to them that we can connect them to.”

Flores also spoke about the planned timeline for the initiative. “This wellness center comes to you in the middle of May, and we want you to stop by our stations, and every day of the week, Monday to Friday, for six hours of the day, we will be there “, she said. mentioned. “And of those six hours, 90 minutes will be a community education offering which is provided free of charge.”

Flores said the five pillars of the Womb Bus are reproductive well-being and fertility, pregnancy, postpartum, infant and feeding partners, and community. She said each of the pillars will be tackled at different locations in the Bronx.

Paulette Henriquez, director of Bronx Health Link, was the final speaker at the event. His organization was founded in 1998 by former Bronx Borough President Fernando Ferrer while he was in office. According to the Bronx Health Link website, the organization “researches and reports on the health issues of Bronx residents and collaborates with other like-minded community agencies in the pursuit of good health care for all.” “.

Henriquez shared information about one of his organization’s latest initiatives. “We have a program here with the Borough President where we provide doula services and resources for expectant mothers, and also provide portable cribs to many families who don’t have a suitable place for their babies. to sleep,” she said. Henriquez said anyone interested in learning more about their programs can visit their website at www.bronx healthlink.org.

*Síle Moloney contributed to this story.