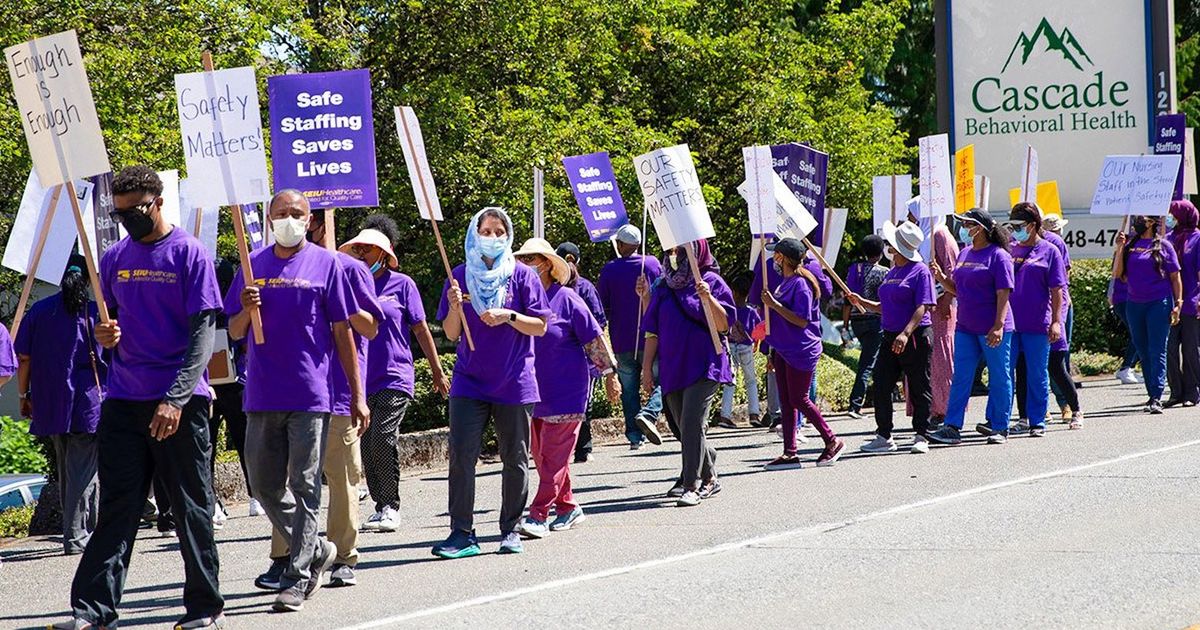 Alazar Yirgu was expecting a normal day when he arrived for his shift at Cascade Behavioral Health Hospital on Aug. 1. Instead, he left on a stretcher that Sunday night, badly injured, sparking what’s become a weeks-long standoff between the hospital’s leadership and employees calling for more workplace safety.

Staff at the Tukwila psychiatric hospital say that on the evening of Aug. 1, chaos erupted when a patient in crisis left his room, stole a key card from a nurse and ran around the hospital, tearing up patients’ medical records and threatening anyone who approached him. Eleven Cascade staff members, including Yirgu, were injured.

“I’m not in a place to tell you exactly what happened because there was so much struggle, but all I can say is that… I thought I was going to die,” Yirgu, 37, said.

According to Cascade employees, that night’s violence is the latest example of increasingly dangerous conditions both staff and patients have faced recently, laying the foundation for a situation that’s now escalated to a “crisis level.” The following morning, a group of workers went on strike – and many say they won’t return to work until the hospital, which is owned by Acadia Healthcare, has guaranteed them more safety, specifically by increasing staffing and hiring security guards to help de-escalate violent situations.

“We’re fed up,” said Yirgu, who’s worked at the hospital for more than five years and says he’s seen many co-workers leave with broken noses or fingers after trying to calm patients down. “And we want everybody to hear our story.”

In an open letter to the community last week, Cascade CEO Christopher West pushed back against the workers’ claims and said their labor union has “greatly exaggerated stories of unfavorable work conditions to bolster its contract bargaining objectives.”

“The Union has been trying to apply unfair – and in some cases we believe unlawful – external pressures to this process, including picketing, work stoppages, smear campaigns and false accusations,” West wrote. “… We cannot say it enough that the well-being and safety of our patients and staff always have been and will be our key priorities.”

Nearly three weeks after the workers stopped showing up for shifts, however, tensions have only grown between management and employees. At least 16 picketing workers have been fired, and this week a chain-link fence went up between the hospital and the picket line.

According to copies of termination letters shared with The Seattle Times, employees were fired for calling out for a scheduled shift and “participating in unauthorized and unprotected employee activities.”

In an email to The Seattle Times on Thursday, Cascade spokesperson Diana Chinea said the hospital was “forced to temporarily install (the fence) after several patients reported being traumatized by verbal intimidation from the Union.”

“It’s a shock,” said 38-year-old Azeb Girma, who’s worked at Cascade for almost seven years as a registered nurse. “All we’re asking for is safety and security. But (management) has failed to do that. “

Girma received a termination letter last week after joining her co-workers on strike.

Another one of the fired employees is Kim Rowe, a registered nurse who’s been at Cascade for about four-and-a-half years. In an interview this week, she said staff and patient injuries have been on the rise.

“Cascade has never been particularly safe, but working in (psychiatry) we understand that it’s an unpredictable environment we work in,” Rowe said. “But over the last year-and-a-half, patient safety has really been a concern.”

Every time there’s a “disruptive” patient, she said, the hospital alerts the staff with a “Code Gray.” Because there aren’t security guards or a designated Code Gray response team, protocol instructs any staffers, including nurses, who can lend a hand to respond to the call to help with de-escalation.

“When we have an unruly patient like that, it affects everybody in the milieu,” Rowe said. “Almost all the patients at Cascade have trauma history, all have PTSD, all get scared or upset, so we don’t just have this one patient to deal with. … It’s a domino effect. (One Code Gray response) can trigger other patients. “

Having trained security guards, rather than just hospital staff, to respond to Code Gray incidents and fights would make a huge difference, she said. The extra hands, plus their more specified training, would make it easier for nurses to then give the patient an injection, for example.

It’s a plea they’ve voiced in the past.

TO 2019 Seattle Times investigation into the state’s private psychiatric hospitals found that violence was often erupting among patients and staffers at Cascade, counting 65 assaults from 2016 to 2018 where a patient or staff member was injured, including several where the victim was knocked unconscious, or suffered a concussion or a broken bone.

The investigation also noted that staff sometimes didn’t intervene in patient fights because of the hospital’s lack of hired security officers, which made them fear for their safety.

While the workers’ labor union wasn’t involved in the initial planning of the strike, SEIU Healthcare 1199NW – which represents about 220 registered nurses, licensed practical nurses, nursing assistants, mental health technicians and service workers at Cascade – has since stepped in to help organize efforts and assist fired workers with filing for unemployment benefits, union spokesperson Amy Clark said this week.

SEIU has also filed unfair labor practice charges with the National Labor Relations Board “as we believe (Cascade management) to be retaliatory,” Clark said.

Chinea said Thursday that because of the strike, the hospital has restricted new patient admissions and is “aggressively recruiting and hiring” licensed registered nurses and behavioral health technicians to “make-up for the nurses and technicians who have decided not to work.”

“It is unfortunate that we must limit access to treatment when the need for mental health services is as critical as ever in the communities we serve,” Chinea wrote. “We are doing our best to not let the contract negotiations and corresponding actions outside the facility impact the care we provide inside.”

She added that the hospital is looking forward to “arriving at a fair resolution with the Union and resuming normal operations,” though Clark said Thursday SEIU has yet to hear directly from the hospital.

Still, many fired employees want to continue working at Cascade, even though they know they could find jobs elsewhere in Washington health care centers.

“I want to work in (psychiatry) and I do want to make a difference for people,” said Rowe, whose patients are often experiencing anxiety, depression or suicidal thoughts. “I know the people I work with are really vulnerable and it’s important to me to be able to be there for them and listen to them and be there to help them.”

She continued, “But if I’m always worried about safety, I can’t give the other patients what they need. And that’s the most frustrating thing for me. “

Nineteen days after suffering his Aug. 1 injuries, Yirgu said he still has some trouble walking and remains on heavy medication. He’s also about to start physical therapy for his left leg and back di lui, which were badly strained. But he’s standing firm in his about him and his co-worker’s demands about him.

“With the experience and training I have, I could get hired (elsewhere) in a heartbeat,” he said. “But I am not going to let this happen in Washington state or in America. I don’t want this to happen anywhere else, so I want to change this culture before I move on. I want patients to be taken care of the way they’re supposed to be. “

Information from The Seattle Times archives was used in this story.

Correction: An earlier version of this story reported that “up to 10” Cascade workers were injured in the Aug. 1 incident. A union spokesperson has since updated that number to 11.

In the beginning of the primaries, voters want polling stations to mail | Well being, Medication and Health