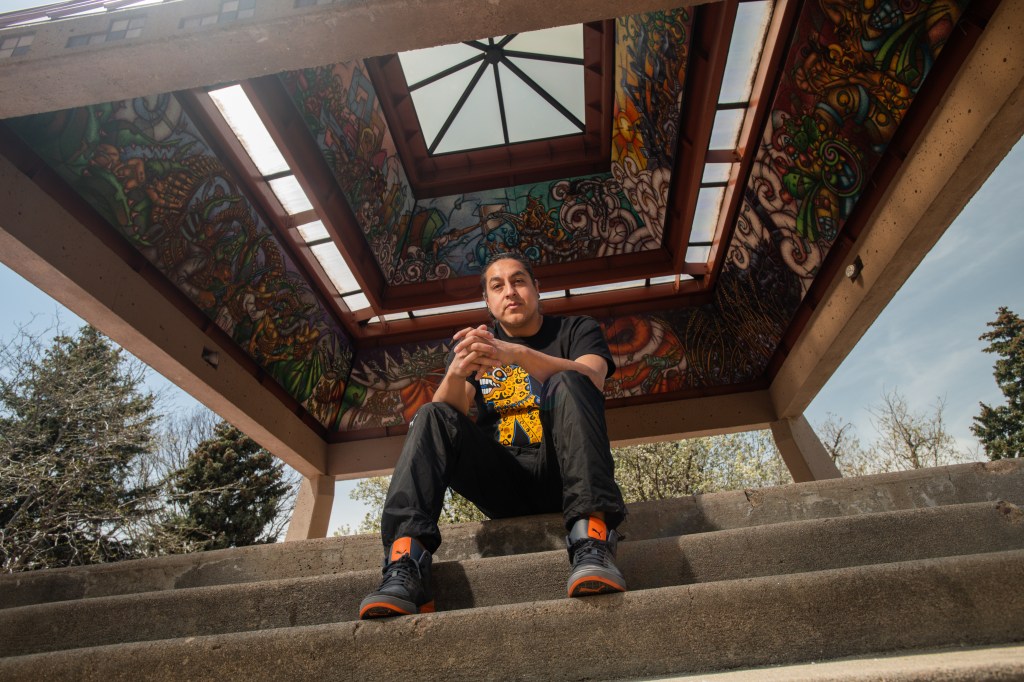 Fourteen years ago, David Ocelotl Garcia designed and painted his first mural: a Mexican-inspired tribal scene depicted on the side of a community organization building in the Sun Valley neighborhood west of Denver.

Using rich oranges, greens, blues and yellows, Garcia – with the help of Sun Valley residents – painted the creation story of the Mesoamerican deity Huitzilopochtli, whose name translates to “hummingbird of the south.”

“The community embraced it as their own, and I wanted it to be that positive imagery that would come through in the community while embracing culture and heritage,” he said.

But then, in 2020, a marijuana dispensary that had moved into the building covered the colorful mural in white paint.

“They literally whitewashed it,” Garcia said.

More than 90% of the state’s Chicano murals from the 1970s — a period that produced a wave of art and activism — have already been lost, including nearly all of the murals in public parks and schools in Denver, Martínez de Luna said.

Efforts to preserve and restore the artwork will get a significant boost on Wednesday with the announcement that the Colorado Chicano murals are on the National Trust for Historic Preservation annual list of America’s Most Endangered Historic Places.

They are the nation’s first murals to make the list in its 34-year history, and Colorado’s first entry since Larimer Square was listed in 2018.

“The list aims to raise national awareness and spotlight places that are an extremely important part of our shared national narrative,” Malone-France said. “But it’s also about drawing attention to the people who are fighting so hard to protect these places and drawing attention to the fact that there are preservation solutions to protect these places.”

“Powerful to see yourself in art”

Martínez de Luna, born and raised in Colorado, grew up in art, murals and social movements. Her father, Emanuel Martínez, was a pioneer of the mural movement who was active in Colorado’s Crusade for Justice, an organization formed in the 1960s that championed the civil rights of Chicanos.

“As the civil rights movement continued, students demanded access to their history,” Martínez de Luna said. “Murals fill this void. They became their visual texts – their manuals. A lot of people didn’t feel comfortable going to the Denver Art Museum, or they go there and don’t see familiar faces in the artwork and nothing depicting them, so the murals are very important. It’s very powerful to see yourself in art.

For years, Martínez de Luna — who also served as associate curator of Hispanic, Latino, and Chicano history at History Colorado, among archaeological pursuits — has interviewed muralists and photographed their work, pleading with local institutions to pay attention to the history engraved on the walls of their city. .

Taking mural issues to heart, Martínez de Luna founded the Chicano/a/x Murals of Colorado project in 2018 with the intention of “promoting, preserving, and protecting Colorado’s artistic heritage in the face of increasing urban development and of gentrification.

In addition to preservation, the project works to map existing murals and educate the public about the art through the installation of information plaques and community events where Martínez de Luna wants to hear from residents about which murals are important to them and why.

Martínez de Luna submitted the Chicano murals to the National Trust in the hope that a larger spotlight would mean the loss of fewer irreplaceable works of art.

In 2020, she sprang into action when Sun Valley’s beloved mural was desecrated – but not permanently destroyed.

“What other murals can we save? »

In Garcia’s “Huitzilopochtli” mural, the deity is flanked by paintings of children with corn crops popping out of their minds to symbolize local youth manifesting abundance and sustenance, he said.

Members of the Sun Valley community, from children to adults, helped Garcia paint the mural over a six-month period.

The work was so popular in the community that it started Garcia on a journey of mural painting around the world and introduced him to a love of public art.

“I never had a classical education,” he said. “I went to the school of life arts.”

Life Art School dealt Garcia a blow in 2020 when he learned through panicked phone calls that his very first mural had been covered in white paint by the new occupants of the building, a dispensary with new owners in Denver.

“They had no idea that murals can have really historic significance in any community,” Garcia said. “You can’t go erase it. It was ignorance on their part. They put white paint on it with the intention of repainting it with their logo or something, and word spread fast.

The dispensary owners did not return a request for comment.

Garcia and Martínez de Luna’s phones rang all morning with calls from community members upset over the removal of the mural.

The two confronted the owners of the dispensary, who eventually agreed to pay for the mural to be restored and a healing mural to be painted on another side of the building. Work is expected to begin later this month.

Using an innovative chemical treatment process and pressure washing technique used in the restoration of Los Angeles murals, the Chicano/a/x Murals of Colorado project plans to blast the white paint from Garcia’s mural , which should remain intact below, said Martínez de Luna.

“Now the question is, what other murals can we save?” she says.

“Part of our common history”

Lack of cultural awareness is just one of the challenges facing historic murals, said Annie Levinsky, executive director of Historic Denver, which helped the Chicano/a/x Murals of Colorado Project bid for the List of endangered places.

“Typically these murals are painted on private buildings… (and) these buildings can be bought and sold multiple times and new owners may not understand when the mural was created so we have definitely seen the erasure of murals for this reason,” Levinsky said. “One of the other challenges we encountered during the La Alma-Lincoln Park historic designation process was that local policy tools don’t necessarily approach art in this way.”

“There is a void in the shields around the visual elements of the buildings,” Levinsky said. “This list is a catalyst to bring all partners to the table and bring national expertise on how to do these things. We know that the more the public is aware and cares about it, the more likely it will be. »

Efforts in Denver or Colorado as a whole to develop policies to enshrine wall protections in law or practice could have a national ripple effect, said the National Trust’s Malone-France.

“These murals meet each of our criteria,” Malone-France said. “They are incredibly beautiful. They vividly convey an important part of our shared history. They were created for their communities by their communities. They are icons. They represent history, identity, create a sense of belonging and ignite the imagination with their beauty and creativity. We can’t lose them. How Denver finds a way to protect these murals isn’t just for Denver. It could be a model for that in the future. national scale.