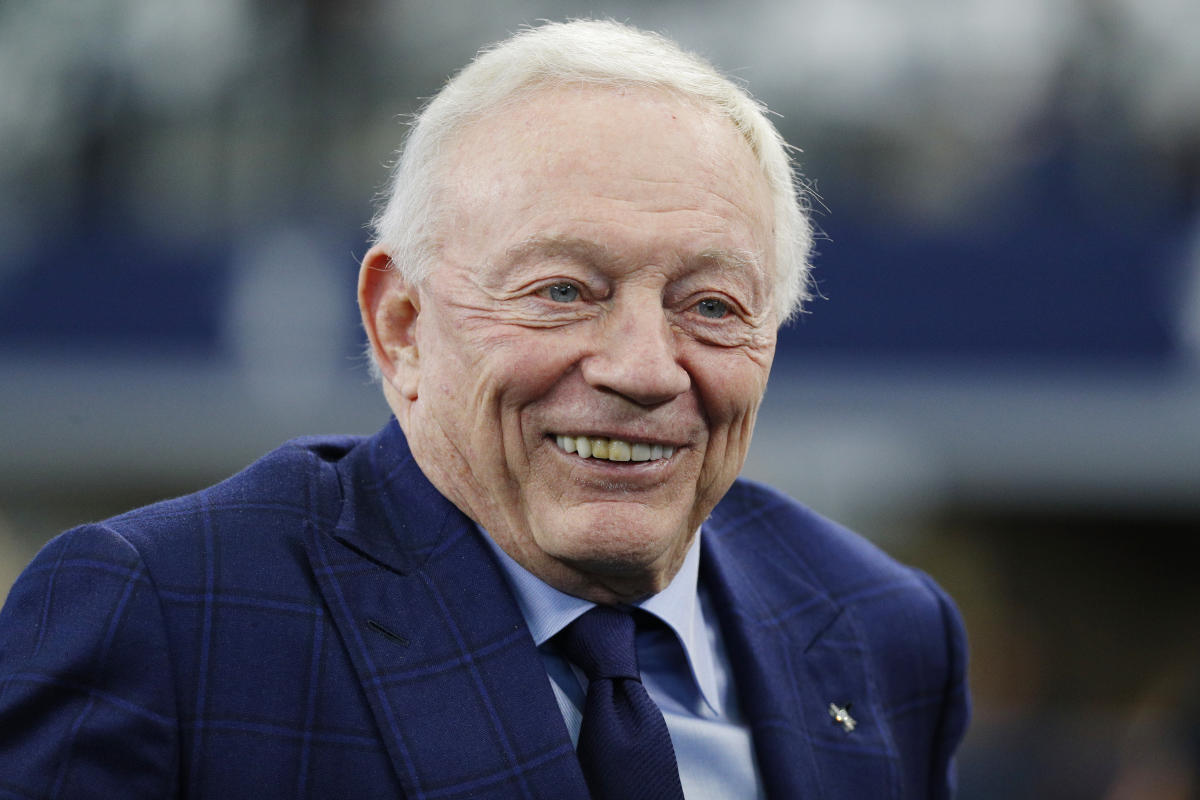 Sometimes the NFL Twitter Draft can be wonderful. Tuesday was one of those days.

Using a blurry, grainy and mostly unreadable image posted to Twitter by WFAA sportscaster Mike Leslie, a group of fans, journalists and Dallas Cowboys-linked websites spent hours on Tuesday afternoon decoding the team’s social media scoreboard. The end result was a remarkably entertaining thread who obviously seems to have decoded much of the top of the Dallas draft board (which you can see at the bottom of this story).

If you’re counting, this is at least the fourth (!) time the Dallas Editorial Board has been exposed through photos or videos uploaded. We’ll come back to that in a moment. But this latest inadvertent exposure came directly from team owner Jerry Jones, who was essentially asking for it when he held up a copy of the team’s player rankings in front of the cameras.

The incident happened after the first day of the draft when he was speaking to the media and justifying the selection of Tulsa offensive lineman Tyler Smith at No. 24. Dallas apparently had Smith ranked higher than a pair of guards who edged him out in the first round. In the process of making this point, a pure Jones moment unfolded, with the franchise owner showing a copy of the team scoreboard to the media as he sat alongside his son Stephen, of head coach Mike McCarthy and vice president of player personnel Will McClay.

“Can you see her?” said a smiling Jones, holding the sheet.

“Don’t show them that,” replied Cowboys executive Stephen Jones, laughing and looking down the line at McClay, who laughed and shifted in his seat.

“Put that sheet down,” urged Stephen.

As the drafts went on, especially when there were still six rounds left, it was a surreal moment. It was also a challenge for fans and journalists that you knew would be met. As in previous years—again, we’ll get to that shortly—someone had a picture. This time it was Lesliewho pulled a screenshot from the WFAA footage sheet and then posted it to Twitter for detectives to get to work.

If this sounds familiar, it should be. A version of this has come to Dallas before at least Three other times. In 2010, the team’s internal media branch mistakenly included a video clip of Jerry Jones standing in front of the team board on the last day of the repechage. A handful of fans took photos of the leak before it was deleted and they eventually headed to Blogging The Boys, a Cowboys deep dive site that impressively collected vast chunks of player ratings of Dallas over the course of seven rounds.

The site has achieved equally impressive feats in 2013 and 2016, again using blurry images that ended up online. Back in 2013, the shots provided by the team featured Jerry (note that theme) standing in front of his club’s scoreboard. In 2016, a team employee took a photo of the board and briefly posted it online more than two months after drafts ended, apparently taken as the franchise began its transition from the Valley Ranch facility to Dallas at The Star in Frisco.

In most of these cases, the images are not very important. Rather, they serve as a fascinating historical record of how Dallas viewed players or who they removed from their roster at the time the selections were made. The Cowboys aren’t the only team to have this sort of thing either. in 2021, the Jacksonville Jaguars‘ internal media pictures posted of this revealed how the franchise ranked some players who weren’t their own picks.

Dallas just seems like it happens more often than others, which probably means they aren’t as concerned as other franchises about protecting player ratings as if they were nuclear launch codes.

More often than not, it builds interest in the Cowboys when this sort of thing happens. Perhaps because so many fanbases live in an information desert when it comes to getting deep behind-the-scenes insight into an NFL team’s draft.

This explains why this year’s decoding project might be more impressive than previous incidents. Despite Jones riding high and literally maintaining the team’s standings at a press conference, Leslie fired what is arguably the grainiest photo of all the incidents, but just enough to get the ball rolling.

It all happened on Tuesday, when the The @CowboysStats Twitter account lamented that no one took a high-res photo of Jerry Jones holding the Cowboys scoreboard in plain sight. This prompted a response from Leslie, who posted the best screenshot he could generate from the WFAA video.

Next came – you guessed it – long-time Blogging the Boys contributor KD Drummond (who is now the editor of Cowboys Wire) who appealed to some of his colleagues, and the wire went on. unfolded from there.

The result: In less than three hours, Cowboys Twitter rounded up the top 16 picks on the board. The set seems to be perfect and follows some of the comments Jerry Jones made when talking about Smith’s first-round selection.

At the end of the night, Leslie, Drummond, Jon Machota of The Athletic and a slew of others had concocted what appears to be an accurate representation of the top 34 picks on the Dallas roster. Interestingly, Dallas’ NFC East rival, the New York Giants, landed the Cowboys’ two highest-rated players — Oregon edge rusher Kayvon Thibodeaux and Alabama tackle Evan Neal — with fifth. and seventh pick overall.

Interestingly, Dallas had the Jaguars first overall pick, defensive end Travon Walker, ranked seventh on their chart. No quarterback has cracked the top 34, while the New Orleans Saints’ first-round pick, offensive tackle Trevor Penning, is also missing. As for the two players most analysts had tied with Dallas for the 24th overall pick — guards Kenyon Green and Zion Johnson — both were ranked lower than actual Cowboys pick Tyler Smith.

The entire top 34 pieced together on the Dallas board: