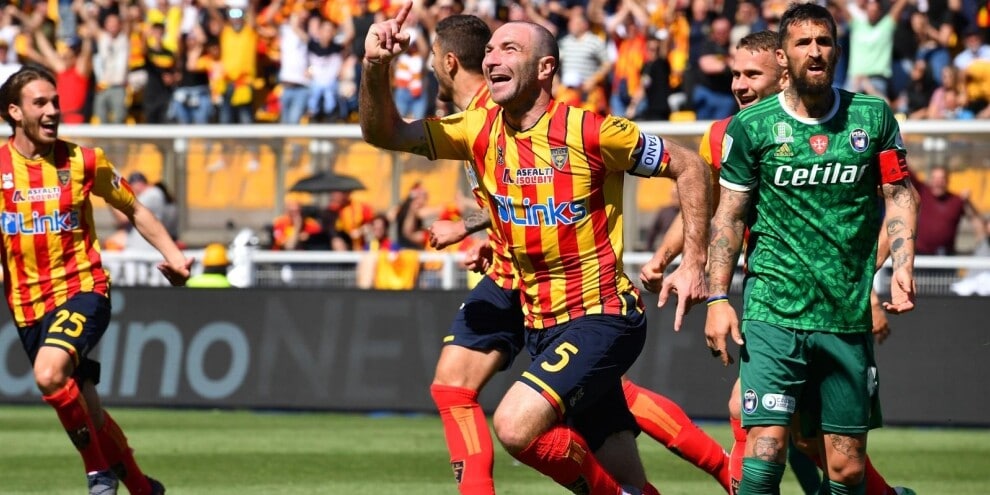 Serie B, fixtures and results

Serie B, the ranking

Lecce regains the lead: 2-0 against Pisa, Lucioni and Faragò decide

The Lecce beats 2-0 on Pisa and thanks to the knockout of the Cremonese, the lead in the standings is regained: Salentini immediately close to scoring with Livieri who, with the help of the crossbar, opposes the header of Dermaku from a few steps. Advantage of the Giallorossi that arrives however at 18 ‘, with the captain Lucioni that unlocks the big match with a flat touch on Coda’s cross: it is Baroni’s first goal in the league for the five. Only another miracle of the “Livieri e Leverbe” company saves Pisa from the double disadvantage: the goalkeeper’s intervention on Blin is splendid and the rescue on the line of the French defender on Strefezza’s safe shot is miraculous. In the second half it is still a header by Dermaku to put the chills at the door of the Tuscans, who respond shortly after with a header from Puscas well neutralized by Gabriel. At 76 ‘shivers for Gabriel on Sibilli’s free-kick, but at 84’ Lecce closes the game: he is the newcomer Faragò with a nice insertion on the first post to pierce Livieri again: the Via del Mare can explode with joy.

The Crotone greets B with a resounding victory against Cremonese: the rossoblù are hoping for a favorable result from Marulla di Cosenza and they want to sell their skin dearly, playing an arrembante first half. At 12 ‘in fact the Calabrians take the lead: Maric goes away to the Lombard defense and serves Kargbo in good position: the Sierra Leone striker did well to return on the right and beat the innocent Carnesecchi. At 38 ‘the rossoblùs double: clamorous error of the grigiorossa defense, with Baez throwing the ball into his own goal in an attempt to postpone a retort by Carnesecchi coming out on Kargbo. Having found that, two minutes later, it becomes sensational: Calapai the Lombard defense was still cold with a great right and signed an unthinkable 3-0 on the eve. At 57 ‘only the offside of Marras saves Pecchia from 0-4, and at 60’ Zanimacchia makes the passive less bitter by beating the innocent Festa with a right in the area. The victory of Cosenza, however, nullifies the success of the Pythagoreans who they arithmetically go back to C.

Monza loses ground in the promotion area: 4-1 by Frosinone

The Monza fails to finalize the opening advantage and goes 4-1 ko against Frosinone. The Brianza took the lead in the 13th minute: Machin sent the goal Mota Carvalho who left Minelli and gave the advantage to Stroppa. The red and white miss the appointment with the doubling first with Sampirisi hitting the crossbar and then with Ciurria who is hypnotized by Minelli face to face. Frosinone responds with Boloca, who dribbles four opponents but then is not precise in the appointment with the goal, pulling slightly out. Ten minutes later Ciano is more precise than his teammate, and scores the equal with a great left from the edge of the area. Match that overturns at 40 ‘: Zerbin blows up the Stirpe, stealing the ball from Donati and chilling Di Gregorio with a plate on the far post for the hosts’ 2-1. A resounding defensive error by Barberis and Di Gregorio gives the trio to Grosso at the start of the second half: backward pass by the midfielder that the goalkeeper is unable to control, actually accompanying the ball into the net. There is still time for the hosts’ poker, with Dinghy who still insults the goalkeeper with a great goal in the 91st minute: the number 27 is good at signing his sixth goal of the season with a precise right to return from outside the area.

Cosenza, victory of hope: 3-1 at Pordenone

The Cosenza remains clinging with the claws to the B series beating 3-1 in comeback Pordenone already arithmetically relegated: at 24 ‘ Lovisa Marulla freezes with his first goal in Serie B: on a cross from Cambiaghi the good son of the Friulian president to anticipate the rossoblù defenders at the near post and beat Matosevic. At 33 ‘ Larrivey is held in the area by Bassoli, the referee whistles the penalty: it is the Argentine ex Cagliari who shows up from the spot and signs the 1-1. At 40 ‘the match is overturned: it is Larrivey again who makes the Calabrian fans explode with joy with his sixth goal in the league: “El Bati” receives from Caso at the spot and flat beats Perisan again, sending the “Wolves” at rest they took the lead 2-1. In the second half Pordenone puts the chills at the Calabrian’s door several times, but Bisoli closes the game in the 82nd minute: it is Camporese to deflect on the net after Trevisan’s parade on Rigione’s punishment.

There Reggina thanks the woods of Micai’s goal and takes one point away from the match againstAlexandria: after crossbar hit by Di Gennaro of head, the Reggina wakes up and goes close to scoring twice before with Rivas and then with Giraudo. L’Alexandria however, he has a clear goal, the victory, and in the 30th minute he hits another wood with Milanese, whose shot is deflected by Crisetig. Before the rest, a free kick from Marconi goes out a few centimeters and makes Micai breathe a sigh of relief. In the second half Stellone tries to cover himself and take home a point (out of Menez and Folorunsho for Bellomo and Cortinovis) while Alessandria tries again with Bezel but still the pole deprives the Piedmontese of the goal of the advantage: nothing to do for the Piedmontese, it ends 0-0 and salvation still to be conquered.

Ascoli, a missed opportunity: with the Cittadella it is only 0-0

The match ends 0-0 Cino and Lillo Del Duca between the’Ascoli by Sottil and the Citadel by Gorini: first half of the guest brand, with Branca and Baldini to keep the defense commanded by Leali in constant apprehension, however beaten on 25 ‘by the former Beretta, who bags with a precise header, but who sees the net of the advantage canceled by Minelli, after a quick as well as scrupulous revision at the Var, which allows the referee to catch a foul in the Marche area on Donnarumma’s standing cross. In the second half, the bianconeri try to change register, but they only light up in flashes following the inspirations of Bidaoui. For Maistro in the final race the best opportunity for the hosts, thwarted by a prodigious intervention by the Euganean goalkeeper Maniero. It ends with a 0-0 which leaves Ascoli’s chances of returning to the playoffs intact after five years of waiting and which allows the Cittadella, which has not been out of the final rush for 5 years, to continue to hope, despite the delay. in the standings from the eighth place currently occupied by Frosinone.

The game started badly for the hosts, with the guests almost twice the advantage. At 22 ‘ Project takes advantage of an oversight by the Giallorossi defense and finds himself alone in Paleari which is passed and sent into the corner. Then at 32 ‘ Vogliacco’s mistake, Celli recovers and tries the shot by hitting the post, the ball returns again to the midfielder who from close range makes a mistake by pulling out. Benevento wakes up in the end of the first half, with Defendi anticipating Farias well in the 44th minute and then a minute later with the goal of Beard that unlocks the race. So many protests on the field, however, for a push by the Giallorossi defender in Ghiringhelli before the shot not sanctioned by the referee. Furious Ternana who returns to the field immediately in search of the equalizer that arrives already at 49 ‘: Palumbo overtakes Viviani and serves a great ball for Donnarumma who is not wrong from a few steps. The game lights up with both teams believing in it and with many reversals in front of us. With the passing of the minutes Benevento grows which becomes very dangerous but surprisingly from a restart there Ternana finds the goal of the advantage: 84 ‘assist by Palumbo who surprises Letizia, Partipilo receives and signs the 2-1. Sensational at Vigorito with Benevento remaining at 63 points and wasting a great opportunity while Ternana rises to 51 points.

It also slows down the Brescia which surprisingly stops at 1-1 against Spal. Hosts immediately aggressive and launched forward. At 17 ‘Brescia close to the advantage with Pinato who to remove the ball hits Meccariello and then the crossbar risking a sensational own goal. Spal reacts in the 22nd minute with Red Pepito that touches the door with a right on the fly. The attacker, however, stops shortly after for injury and is forced to change. The teams continue to try but we return to the locker room with a score of 0-0. Result that remains blocked with the most dangerous Spal of Brescia but fails to realize the opportunities created. However, Brescia was the one to unlock the game in the final: in the 84th minute long throw by Pajac, the new entry Tramoni overtakes Zanellato and then beats Thiam. Corini’s team celebrates a very important victory in terms of promotion but at 94 ‘comes the sensational draw of Spal that ruins the party at Brescia. The new entry Latte Lath takes care of the corner and signs the 1-1. Spal thus reaches +3 on Alessandria in the playout area while Brescia slows down which rises to 63 points together with Pisa and Benevento.

Vicenza at -2 from Cosenza: Como beaten

The Vicenza beats Como 2-0 and keep hoping. Important challenge for the guests to get out of the relegation zone while the hosts are already arithmetically safe. Como starts better than at 10 ‘is stopped by a super Contini good at repelling first up Vignali and then on Bellemo. At 17 ‘Como is still dangerous, with Parisians hitting the crossbar. Many opportunities for the hosts but surprisingly the game is unlocked by Vicenza: in the 36th minute from a corner kick Brosco anticipates Varnier and heads the 1-0. In the final, Como tries but Contini still surpasses and rejects Gliozzi’s header. In the second half, Vicenza pushes again, in search of the knockout blow that arrives in the 82nd minute: Varnier and Vignali mess around, Meggiorini recovers the ball and finds the goal of doubling. Very important victory for Vicenza which thus rises to 28 points, to -2 from Cosenza in the playout area.

Finally, the Serie B day ends with the defeat of Parma in the house of Perugia for 2-1. A nightmare start for the guests, already under 5 ‘with Rispoli touching the ball with his arm on Lisi’s cross: the referee awards a penalty kick, Burrai He kicks it, Buffon senses the right side but does not get there and the hosts take the lead. Then after less than two minutes Buffon becomes the protagonist of a sensational duck, smoothing the ball on the Oosterwolde backpass. The former Juventus goalkeeper tries to remedy his mistake but Olivieri takes advantage of it by overcoming him and making the doubling with an empty net. The hosts keep pushing and even touch the trio at 11 ‘with the crossbar hit by Bernabé and then at 14’ with Circati. Parma tries to react but fails to become dangerous and thus ends the first half. In the second half, Perugia continues to become dangerous and touch the goal but surprisingly comes the reaction of Parma who in the 72nd minute reduces the distance with the Vazquez volley. At 77 ‘still Perugia ahead with Carretta devouring an incredible opportunity with an empty net. Parma tries to push in the final but it’s all in vain and Perugia rises to 55 points, a -3 from the playoff area while the Crusaders remain thirteenth with 45 points.