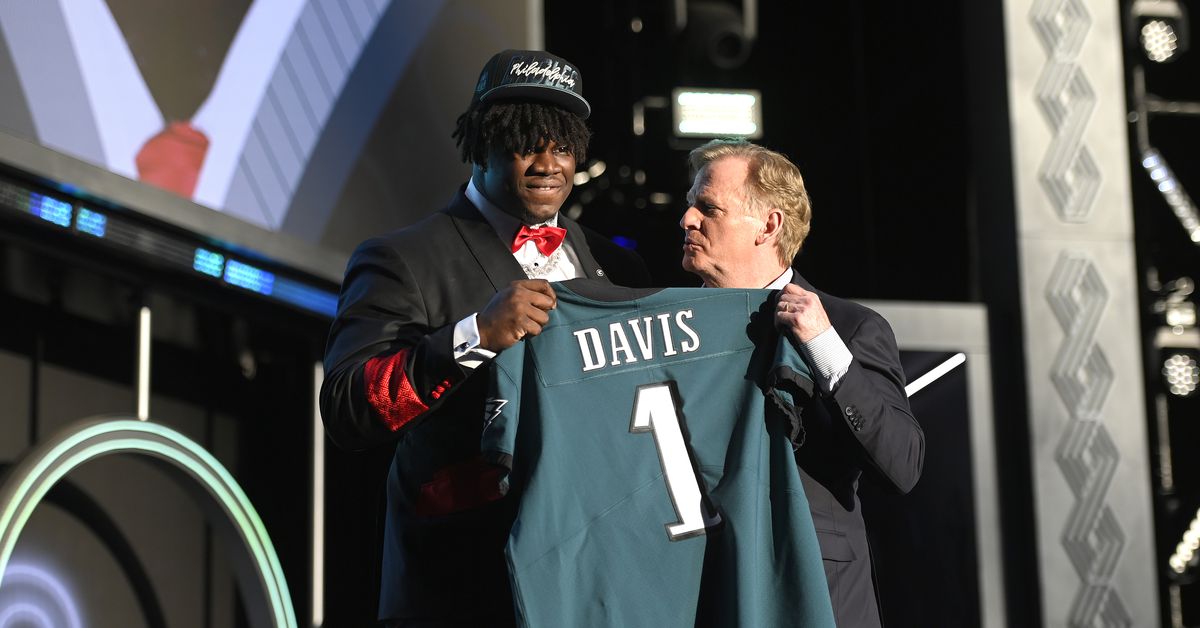 The story of Howie Roseman has long been about a man who tried to act like he was one step ahead of the league, but constantly ended up falling on his face. Let it be the disastrous 2019 NFL Draft where JJ Arcega Whiteside was picked ahead of DK Metcalf or taking Jalen Reagor over Justin Jefferson in 2020… it always seemed like the obvious answers were there for Howie and he always zigzagged unnecessarily when others zagged.

But something has changed.

Before last year’s draft, the team needed some stability. The Doug Pederson era ended in disaster, Carson Wentz left the scene on the left and the Eagles were left with a young quarterback, a rookie head coach and a general manager looking to right the ship he was. had capsized. Howie Roseman spent his first two picks on two of the most important players on the nation’s top team that year: DeVonta Smith and Alabama’s Landon Dickerson. Smith was fresh off a Heisman campaign that won the Crimson Tide the national title and Dickerson had been a highly decorated member of the Tide’s offensive line. These were smart and obvious picks from proven players at the highest level. Not to mention Howie Roseman who emerged from this draft with an additional first-round pick in 2022.

The reward was obvious. DeVonta Smith was immediately the best wide receiver on the team by far, and Landon Dickerson eventually settled in as a guard next to Jordan Mailata. The top rookies made huge contributions while the rest of Howie’s 2021 class had some very bright times. The end result was a surprise playoff berth and a lot of hope for the team’s future.

The spring of 2022 and the Eagles were filled with picks and money, hoping the whole team would take a big step forward. Howie made another great trade to send one of the teams 3 first-round picks to New Orleans for a first in 2023 and a second in 2024, so the Eagles entered the draft with two first and a handful of other choices.

Then Howie really got down to business.

The Eagles could have gone a million ways in the first round. Needs were still high across the team: basically any quality defensive player would have been welcome in the first round or maybe a wide receiver. Howie made his first move when he edged out Baltimore and selected Jordan Davis, the defensive tackle for the athletic marvel of Georgia’s national championship defense. Not even 30 minutes later, Howie moved the other first-round pick for Tennessee’s AJ Brown, one of the NFL’s best young wide receivers. Brown, a proven playmaker, is arguably better than any receiver the Eagles could have gone through in the draft. It was clear the Eagles needed a more experienced wide receiver in their offense full of young receivers and Howie Roseman made a play for one of the best.

And somehow, that’s still not the end of Howie’s masterful 2022 draft story.

On Day 2, Roseman selected Nebraska’s Cam Jurgens Sports Center. The team had been linked with Jurgens for some time and after the draft it was revealed that Jason Kelce himself had said that Jurgens would be his heir. When Jason Kelce tells you a center is good, you listen.

But the main storyline on Day 2 wasn’t the Eagles’ second-round center, it was linebacker Nakobe Dean falling much further than anyone expected. The heart and soul of Georgia’s national title defense was projected by many as a first- or second-round pick, but he was in a tailspin on day two.

His downfall was stopped with the 83rd pick in the draft when Howie Roseman drafted speedy Nakobe Dean into a team desperate for top linebacker play.

For the second year in a row, Roseman drafted two of the most important players to the top team in the country. A formula that worked so well last year that it would be foolish not to do it again. The Eagles came out of the draft with Jordan Davis, Nakobe Dean, AJ Brown, Cam Jurgens, quality depth players and a handful of picks in 2023.

It really feels like Howie Roseman was willfully self-critical after the 2019 and 2020 drafts and he’s now on a.

Enough about Howie, here are some closer looks at the Eagles’ 2022 picks.

What he immediately brings to the team: Jordan Davis was my fourth ranked player in class. His dominant run defense and block-eating ability were enough to project him as an NFL high draft pick, but he also happens to be one of the best athletes to ever come out of college football. . The immediate impact of Jordan Davis is someone who can dominantly play any inside defensive position in base or nickel defense. His one-man crew ability against the run will allow the Eagles to play with lighter boxes to be more ready to defend against the pass. Having such a dominant running defender is a perfect way to consistently bring defenses into third and long situations, elevating the entire unit’s play.

Long term outlook: Much has been made of Jordan Davis’ lack of pass rush production at UGA, but in reality, it had less to do with ability and more with UGA’s defensive philosophy. Davis was asked to control the line of scrimmage and create chances for the blitzers. Davis read run first on every play he was on the court, which meant he always played a slower step to run and rush the passer. In the few times Georgia has asked him to shoot on the field, Davis has shown his world-destroying ability to blast guards and centers to build inside pressure.

The depth of the Eagles defensive line means Davis will be a big player in Year 1, giving the Eagles flexibility with formations on the defensive front. They can play 3-4 lineups with Davis at 0-tech, 4-3 over and under fronts with Davis playing 1-tech and nickel defenses on the court in early downs with Davis playing defensive tackle knowing the teams will struggle to run. As Davis gets more reps where he can rush down the court, he will improve. If he takes even a small step as a productive pass thrower, the Eagles defensive front will be great for years to come.

What he immediately brings to the team: Cam Jurgens has been selected to possibly step into Jason Kelce’s shoes, so it’s fair to assume that he (hopefully) won’t see much of the field in his rookie year. Unlike Landon Dickerson last year, Cam Jurgens lacks the size and experience to play guard in his first year. Jurgens will therefore be able to sit and train behind Jason Kelce in the first year.

Long term outlook: Jason Kelce does so much to catalyze the Eagles offense with his athleticism, toughness and intelligence. To replace what he does is a big, big task. So drafting Jurgens, whose athletic profile is very similar to Jason Kelce, was a step in the right direction. The hope is that Jurgens’ athletic tools and on-court mentality will be a great foundation for coach Stoutland to turn him into the Eagles’ next great center.

What he immediately brings to the team: The Eagles have been lacking a real difference maker at linebacker for some time. Nakobe Dean not only brings speed of play, but also brings a mentality that the Eagles haven’t had on their defense since the departure of Malcolm Jenkins. Nakobe Dean was a leader for Georgia’s national title team and the heart and soul of their defense. Dean’s energy was something that was clearly infectious for the Bulldogs and he will bring that to the Eagles locker room.

Schematically, Dean will be a defensive asset as soon as he can tread the field. Although smaller than the average linebacker in the NFL, he used speed, instinct and physicality to escape and run through blocks in college. While it’s fair to assume he’ll struggle more with the NFL lineman, his speed will always be the difference. He will immediately be a game-changing blitzer and having him on the court with Haason Reddick, Josh Sweat and Kyzir White will give the Eagles so much flexibility to move their linebackers and create pressure from anywhere on the court. Dean will see most of his early shots as a nickel linebacker. Fortunately, the Eagles’ talent on the defensive line should make things easier for Dean in terms of flow to the running backs against the run.

Long term outlook: Dean may not immediately be a linebacker all the time, but that should be his projection as he gets more comfortable. Dean was considered first-round talent for a reason. By the end of his rookie season, Dean should be comfortable enough as an NFL linebacker to pick up the majority of snaps there.

What he immediately brings to the team: Kyron Johnson had time to play on the edge and off the ball during his tenure at Kansas. His speed, physicality and hot engine have made him a productive and valuable member of the Jayhawks defense. In All Star home runs, Johnson impressed in practice, often winning one-on-one with offensive linemen who went much earlier than him in the draft. Johnson’s size at six feet and around 235 pounds isn’t ideal for a point player in the NFL, but his speed and smarts could make him valuable depth at linebacker. The Eagles also highlighted his contributions to special teams in college (Howie said he had 17 career ST tackles), showing their hand that Johnson will be used on special teams early in his NFL career.

Long term outlook: Johnson’s most likely path is eventually to become a defensive player. His peak experience could make him a chess piece in a defense that values ​​flexibility. Most likely, Johnson will see most of his time as special team contributors.

What he immediately brings to the team: The Eagles have a huge hole behind Dallas Goedert in terms of viable passes to catch tight ends. Jack Stoll was an excellent blocker in his rookie season, but was only targeted five times for four catches. The team has high hopes for Tyree Jackson, but he’s still recovering from an ACL injury. JJ Arcega Whiteside was recently traded to tight end, but it’s hard to say how this experience will turn out. That being said, Grant Calcaterra was a dynamic and valuable pass catcher during his college career. He’s tall, very athletic for his height, and has good hands. He comes into a rare position where he could compete for the second tight end despite being picked late in the round.

Long term outlook: Calcaterra’s biggest concern is health. He briefly stepped away from football due to concussions before returning to play a season at SMU. The talent is undeniable for Calcaterra and he could be an important player for a team that likes tight two sets. The main thing for him will be to stay on the pitch.