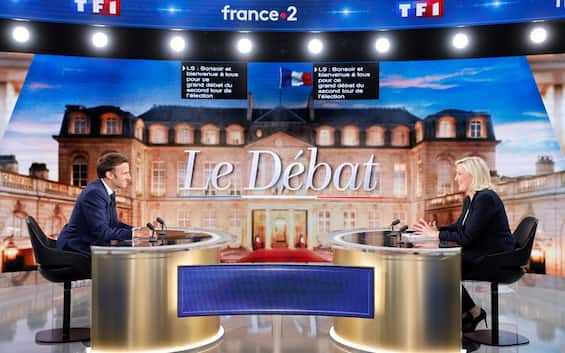 The two candidates still in the running for the Elysée compete in a televised confrontation. Mutual attacks on Ukraine and economic issues. The second round of the French presidential elections will take place on 24 April. Polls currently show a slight advantage for the incumbent president

Television debate among the presidential candidates of France: the outgoing tenant of the Elysée, Emmanuel Macron, and the leader of the Rassemblement National, Marine Le Pen. A face to face of 2 and a half hours live on TV 4 days after the ballot. The outgoing president attacked the challenger on the theme of the war in Ukraine: “You depend on Russian power and Putin”. Le Pen agreed with the sanctions against Putin, but “not to stop Russian gas”. Macron finished in first place in the first round, collecting 27.8% of the votes, while Le Pen finished in second place at 23.1%. The turnout was 73.7%. The second round is Sunday 24 April (THE SPECIAL OF SKY TG24).

The challenges for Le Pen and Macron

For Le Pen this debate was supposed to be the revenge of 5 years ago, but right from the start the roles seem similar to those that sanctioned Macron’s victory in 2017. The outgoing president appeared more calm and at ease, the challenger – although starting the debate with the preferred topic by lottery – seemed more uncertain in the question and answer. For a few days Le Pen had not appeared publicly and would have been in retreat to better prepare the debate. Even for the outgoing president, the confrontation was decisive: “Le Pen starts from so low that everyone will want to rehabilitate her even if she is very bad”, they said from Macron’s camp. If the outgoing president wins, Prime Minister Castex has announced that he will step down to allow “new impetus” to be given to the executive.


French presidents: the complete list, from Napoleon III to Macron

Macron was the first of the two contenders to arrive, smiling and calm, in the broadcasting studios. He exchanged a few words with the presenters, then went to welcome, with a smile and a handshake, the opponent, visibly tense at the entrance. The two then sat down at their respective tables and the challenge began. “Why do you think you are a better president for the French?” Was the first question for both candidates. “I will be the president of the democratic renaissance – began Le Pen – I will also be the president of the newspaper. I will be the president of the restoration of harmony among all the French, of justice, of national brotherhood, of civil peace”. Macron immediately attacked on ecology and Europe: “France will be stronger if it is able to grasp the ecological question.” And he promised to “make Europe stronger” if he is re-elected to the presidency of the Republic.

At the first clashes over purchasing power, Marine Le Pen’s favorite theme for her electoral campaign, the right-wing candidate denounced the first uncertainties. Especially when Macron attacked: “Madame Le Pen, the word ‘unemployment’ does not appear in your program even once”. Le Pen reacted with the proposal of her program which envisages “giving back between 150 and 200 euros per month for each family unit”. But the real sparks came when the topic of the war in Ukraine and the role of France glided over the debate. Especially when Macron accused Le Pen of being “addicted to Russian power” for running as a candidate on a loan from a Russian bank. And, as a result, neither she nor anyone else in her party can be credible “when there are difficult decisions to make,” she added. Marine Le Pen reacted by accusing the president and power in general of not having foreseen a mechanism through which candidates can obtain loans from French banks. The clash over Europe followed, with Le Pen reiterating his party’s position: “There is no European people, there is no European sovereignty, it is you, Monsieur Macron, who wants to talk about European sovereignty and not of French sovereignty “. “You don’t say it – Macron urged – but you want to get France out of the European Union”. “We want the Europe of the nations,” Le Pen replied. “So let’s say you lie about what you propose,” Macron replied. And when Marine Le Pen took up the theme of “national preference” in hiring workers, Macron reiterated that it would be “the end of the free movement of people and goods”.

The ballot on Sunday

The second round of the French presidential elections will take place on April 24: the ballot is the same as five years ago, when the current president Emmanuel Macron conquered the Elysée with over 66%, while Marine Le Pen stopped just under 34. %. The latest polls published show Macron ahead of Le Pen, albeit with a smaller gap compared to the last electoral challenge: the president would enjoy support between 53 and 55%.

French presidents: the complete list, from Napoleon III to Macron

Since 1848, 25 heads of state have taken office in France. The President of the Republic since 1962 is elected by direct universal suffrage in two rounds. His office has lasted for five years since 2002. Here are who held the highest office at the Elysée

The President of the Republic is the highest office in the state in France. Holds the executive power and also a power of political directionespecially in foreign policy. During the Second Republic he was elected directly by the citizens, while in the Third and Fourth Republic he was elected by the Parliament. Since 1962 is elected a direct universal suffrage double shift. Initially seven years, from 2002 the charge is reduced to 5. Here are all the 25 French presidents from 1848 to today

The first French president, elected by the citizens, he was Louis Napoleon Bonaparte, grandson of Emperor Napoleon Bonaparte. He was president of the short interlude of the Second Republicestablished by 1848 following the revolutionary uprisings, up to coup of 1852 with which he himself restored the Empire and reigned under the name of Napoleon III

After the French defeat in the battle of Sedanthe September 4, 1870 Paris he removed Napoleon III from the throne and declared the Third Republic. The provisional head of state was Louis-Jules Trochu until February 1871. The first president of the Third Republic was Adolphe Thiers (pictured)elected on August 31, 1871, until his resignation in 1873. He succeeds him Patrice de Mac-Mahon until January 30, 1879