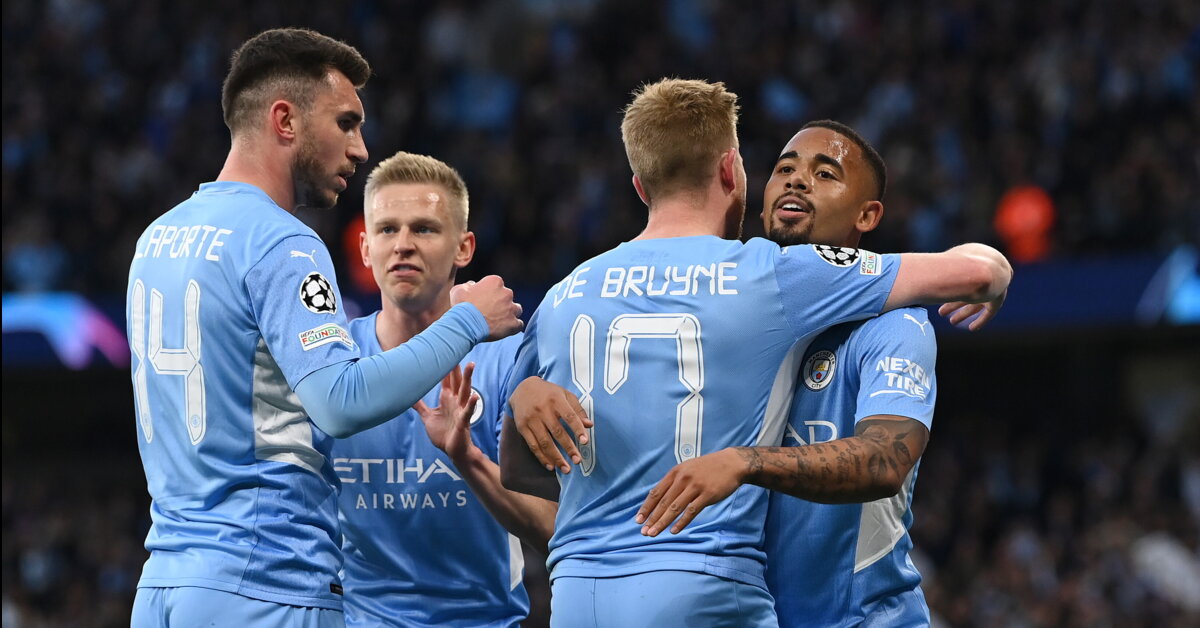 The Manchester City wins the first round of the Champions League semifinal against Real Madrid and targets the final in Paris. At the Etihad Stadium the team of Guardiola beats Ancelotti’s men 4-3 at the end of a spectacular match. In the first half the Citizens start strong and sink the blow with De Bruyne (2 ‘) and Gabriel Jesus (11 ‘), then they waste several opportunities e Benzema (33 ‘) shortens the distances. In the recovery Mahrez hit a pole, then Foden (53 ‘) signs the trio, Vinicius (55 ‘) rekindles the race, Bernardo Silva (74 ‘) poker falls e Benzema (81 ‘) keeps the hopes of the blancos alive on a penalty.

THE MATCH
Seven goals, many opportunities and everything still under discussion for access to the last act of the Champions League. City-Real promised sparks and in Manchester the expectations of the eve were not disappointed by the verdict of the Etihad Stadium. Numbers in hand, Guardiola’s team wins the first battle, but Real takes home a very precious 4-3 in view of the second act at the Bernabeu. All with a lot of quality and courage on the pitch. An extraordinary commercial for football with a lot of technical quality, pressure, rhythm and intensity. All seasoned with high school numbers, some defensive errors and playing as champions. Without tactics and barricades. Stuff that hasn’t been seen in Italy for a long time.

Without Cancelo, at the Etihad Stadium Guardiola piazza Stones on the right and Zinchenko on the left and in attack relies on Mahrez, Foden and Gabriel Jesus with De Bruyne, Rodri and Bernardo Silva in tow. With Casemiro bruised on the bench, Ancelotti instead shows up in Manchester with a 4-3-3 front-wheel drive led in the median by Valverde, Kroos and Modric and in front of the trident Rodrygo-Benzema-Vinicius. Choices that immediately grant a lot of space and outline the tactical theme of the match. Tall and aggressive, it was City who started better and after a hundred seconds Guardiola’s team immediately hit the spot. Caught by Mahrez with the tachometer, De Bruyne cuts in the middle of the area and beats Courtois with a diving header. Lightning that unlocks the race and detonates the Etihad. Leading up and under pressure, City rely on possession to control the game, maneuver precisely in the tight and seek depth with the wide-openers. Under and in difficulty in setting up in the median, Real instead struggles to conquer the ball, struggles on the verticalizations for Foden and fails to get out. Attitude that gives the field to the Citizens and leads to the doubling of the hosts. To punish Courtois this time Gabriel Jesus thinks about it, but it all stems from a wrong advance by Alaba on a cross in the area by De Bruyne. A devastating one-two that in just over ten minutes puts Real on the ropes and enhances City’s quick and precise play. Apart from some thrills in the setting from behind, up to half an hour Guardiola’s band dominates the match and chances rain down from the parts of Courtois. Occasions that Mahrez, Foden and Zinchenko are unable to realize, keeping Real in the game. Also because at the first good opportunity Benzema is relentless on a cross from Mendy and cold Ederson with a left footer, anticipating Zinchenko. Network that brakes the forcing of the City and gives morale to Real. After a good play by Kroos, Rodrygo scares Ederson with a powerful right, then Pep’s men get back on track and close the first half forward.

After a hole from Militao, the second half began with a Mahrez post and a save from Carvajal on an empty right foot from Foden. Occasions that with Real a little co-merged increase the pressure of the City again. De Bruyne invents first, but no one takes advantage in the area. Then Fernandinho anticipates Vinicius and serves Foden a perfect cross for the goal that restores the distance. Tris to which Real, however, responds immediately with a play by Vinicius himself, who returns the “favor” to Fernandinho and places the ball behind Ederson after a fifty-meter sprint. Goal that triggers the changes and lights up the last half hour of play. With long teams and a lot of field available, City and Real face each other openly and in the last half hour an incredible show is staged with continuous reversals in front and many opportunities. On the one hand Modric increases the laps in the middle of the field and Benzema takes the team on his shoulders, on the other the City pushes and quickly seeks depth by exploiting the one contor one. Courtois stops a central deviation by Laporte, then Bernardo Silva drops the poker with a fireball at the intersection after an advantage granted by the referee for a foul on Zinchenko to the limit. Pearl that together with a great play by Mahrez just out of the way seems to direct the game and the qualification, but who instead collides with another reaction from Real. A left by Modric from the edge ends up a little wide, then Laporte touches his hand in the area and Benzema again shortens the distance from the spot, mocking Ederson with a spoon for strong hearts. “Madness” that keeps Ancelotti’s men afloat. In the final, in fact, the City increases the pressure again, but is no longer able to break through. At the Etihad Stadium seven goals are not enough to decide the qualification already.

REPORT CARDS
Gabriel Jesus 7.5: dances on the ball, driving mad all those who pass by. Devastating in the strait and one on one. He signs the doubling coldly
De Bruyne 7: he’s not at his best, but he still manages to be the protagonist of the match. He unlocks the head race with courage, then serves Gabriel Jesus on the double and places himself between the lines to invent football
Mahrez 6.5: pushes and enchants with his left, but he is not always lucid in his choices. He serves the assist to De Bruyne, then sends Guardiola into a rage after a wrong counter foot and in the second half hits the post face to face with Courtois
Alaba-Militao 4.5: evening to forget. Gabriel Jesus humiliates them repeatedly and at certain speeds they never see the ball
Benzema 7.5: few balls arrive in its parts, but at the first good he throws it in with the shot of the champion and then beats Ederson from the spot with a very courageous spoon keeping alive the hopes of qualification in view of the return
Vinicius 6.5: does and undoes. First he misses on Fernandinho and City places the trio, then he gets forgiven with the bucking of 3-2 immediately after Vinicius’s goal. Tarantolato, it lights up intermittently

THE STATISTICS
For the first time in the Champions League, both Real Madrid and a team of Carlo Ancelotti have conceded two goals in the first 11 minutes of play of a match.
A team of Carlo Ancelotti has conceded four goals in a single match for the fifth time in the Champions League: Juventus (vs Hamburg in 2000), Real Madrid (vs Schalke, in 2015), Bayern (vs Real Madrid, in 2017) and Milan (vs Deportivo in 2004).
Seven goals scored in this challenge: in no other Champions League semi-final have more been scored (seven also in Ajax-Bayern, in 1995, and in Liverpool-Rome, in 2018).
Kevin De Bruyne’s goal after 93 seconds is Manchester City’s fastest in a Champions League match.
Kevin De Bruyne’s goal, after 93 seconds, is the fastest scored in a Champions League semi-final since Joshua Kimmich’s goal in May 2018 for Bayern Munich vs Real Madrid (2 minutes 44 seconds).
Kevin De Bruyne’s goal, after 93 seconds, is the fastest goal scored by Real Madrid, in the Champions League, by Nikola Vlasic’s goal (1:05), with CSKA Moscow, in October 2018.
Karim Benzema has scored nine goals in the knockout stages in this Champions League (3 in the Round of 16, 4 in the quarterfinals, 2 in the semi-finals): only Cristiano Ronaldo has done better in this stage in a single edition of the competition (10, in 2016- 17).
Karim Benzema has scored 41 goals for Real Madrid this season in all competitions, making him the fifth player to reach 40 goals in a single season in club history, after Cristiano Ronaldo (seven times), Ferenc Puskás ( two), Alfredo Di Stéfano and Hugo Sanchez.
Karim Benzema played the 600th match with Real Madrid in all competitions (320 goals and 140 assists), becoming the eighth player to reach this milestone in the club’s history, the first non-Spanish player.
Gabriel Jesus is the fourth Brazilian player to hit the target in three consecutive Champions League matches against Real Madrid, after Mário Jardel, Lúcio & Giovane Élber.
Phil Foden and Júnior Vinícius are the first two players born from 2000 onwards to score in a Champions League semi-final.
Before Gabriel Jesus and Junior Vinicius, only once had two Brazilians scored in a European Cup / Champions League semi-final: Ronaldo and Roberto Carlos in Real Madrid-Juventus in May 2003.
Pep Guardiola has won 40 games in CL with Manchester City, overtaking Carlo Ancelotti’s 39 with Milan and taking him to fourth place in the history of the competition for number of wins by a manager with a single club (Alex Ferguson – 102 with Man Utd, Arsene Wenger – 83 with Arsenal, Diego Simeone – 44 with Atletico Madrid).