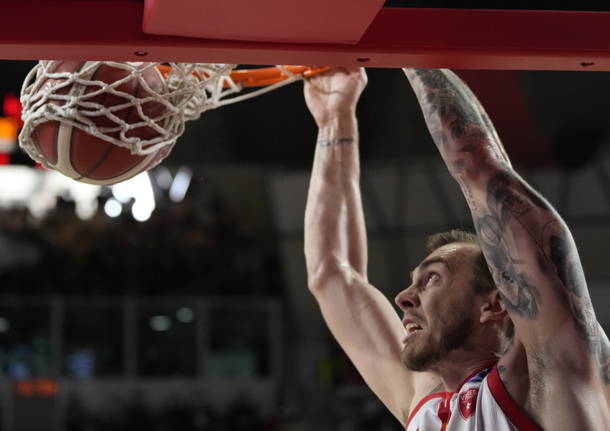 What did not come on the day of the Resurrection happened on the day of the Liberation. Varese is safe, Varese remains in Serie A, Varese hits a goal that seemed difficult again after 28 races in which everything happened. Varese triumphs, in a certain sense, while also taking a little bit of luxuries: to score 103 points in a match, to score from three points with 56%to send to the report seven men in double figures. That of inguaiare a historical opponent, Fortitudo Bologna, even more on the edge of the abyss after 101-92 encased in a Masnago that savors the joy of partying.

It took, such an evening, even with a “quiet” ending after the head-to-head had been unnerving for nearly half an hour. Basket on one side, prowess on the other, attack rebound on this side, assists on the other side without either of the two contenders being able to force a solid advantage. But then the game of Openjobmetis has definitely blossomed: on the occasion of a couple of white and blue uncertainties, Seravalli’s team realized they could escape by finding hot hands among its shooters.

Keene, sure (26 points), Woldetensae as well, i Baltics obviously and even De Nicolao which in the most important evening closes with 3 out of 3 from the arc. The signal that for Bologna the shoulder was too strong, and so in the final minutes the red and white flew up to +17 by pocketing the ball from every point of the field. But also Reyes deserves an emphasis: the “least loved” player of the Roijakkers era takes his revenge with a terrific match, 15 points and 26 points. And even those who did not make a basket – only Caruso and Librizzi – have found a way to give their contribution to the cause. Choral victory if there is one.

Around, we said, the salvation party was unleashed with well over 4 thousand hot fans and engaged in a “vocal” duel (but also very correct) with i many fans arrived from the Emilian city. Many, many children and young people from schools and minibasket centers in the stands, an even more beautiful setting for this in a future key. A tomorrow which Luis Scola and his collaborators will now be able to take straight awaywithout particular worries of mind due to the last two days of the championship.

Very very difficult matches – in Brescia and at home with Sassari – but to play free of mind and heart: who knows that some other satisfaction will come (and a place to spend on the European table). In the meantime, however, it’s time to take a breath, relax, rejoice and take notes, not to repeat a totally crazy season like this one tomorrow.

Keene, Reyes, De Nicolao: the many faces of a brilliant Openjobmetis

Quintet revolutionized for Alberto Seravalli who holds seated De Nicolao and Sorokas, giving Keene the direction, Wolde and Reyes the quintet and a Here is the task of marking the giant Groselle, a move reminiscent of Brindisi’s on Perkins. There Effe is without the injured Feldeine and shows up on the field with four foreigners next to Aradori, accompanied by about 300 fans (3 buses from the “Fossa”). Very warm Masnago, a frame of other times, but all in the name of fairness.

Q1 – Varese’s nose ahead in the early stages but Kigili immediately agile to re-enter and pass in front with a Charalampopoulos immediately very hot (it will be a constant). The attacks have the better of the defenses, Reyes shows up, usual good start of Beane and distributed points. At the first break it is 24-25.
Q2 – In the second quarter the Fortitudo appears a little more concrete and on a couple of occasions tries to have a better idea touching the +5. Brava, in the circumstance, also the OJM to have the patience to return despite a third foul by De Nicolao arrived very early (just over 13 ‘). Like Reyes on both sides of the parquet, like him even more Keene warming his hand and places a counterbreak with which Varese returns to lead. An advantage that does not last because the play is dribbled on the feet on the last possession and allows the counterattack of Charalampopoulos for the 45-45.
Q3 – In the third period also comes the volley signed by Woldetensae, zero points in the first 20 ‘, 11 in the fraction following the interval long. Not even this, however, is enough to detach a Kigili that responds blow by blow, at least until 28 ‘when De Nicolao signs the 68-66 with a triple from the corner. Then the playmaker commits a fourth foul and sends Procida to the line: the former canturino, however, is only 1/3 and Varese understands that, perhaps, the Effe is not as solid as it was feared. In the last 2 ‘Varese builds a +7 (76-69) which is worth platinum with feats of Wolde and the usual Keene.

And here, more Openjobmetis masterpiece: with the first possession of the fourth Reyes extends to +9 and removes another piece of safety from Effe which at that point begins to force the shot and struggles to find points. Masnago is a pandemonium and explodes when the red and white spread their wings: Sorokas scores from 3 (after Librizzi’s offensive rebound), he scores again Keene from far awayor and in a few moves the score reaches even +17, maximum advantage (94-77). It can’t end like this, because the guests still have a few swipes in store to reconnect but the gap is too big to create chills. And when Beane nails a smash hit of his, for Varese it is just a party.

Seravalli: «This victory is a great prize for everyone. Thanks to the Varese public “