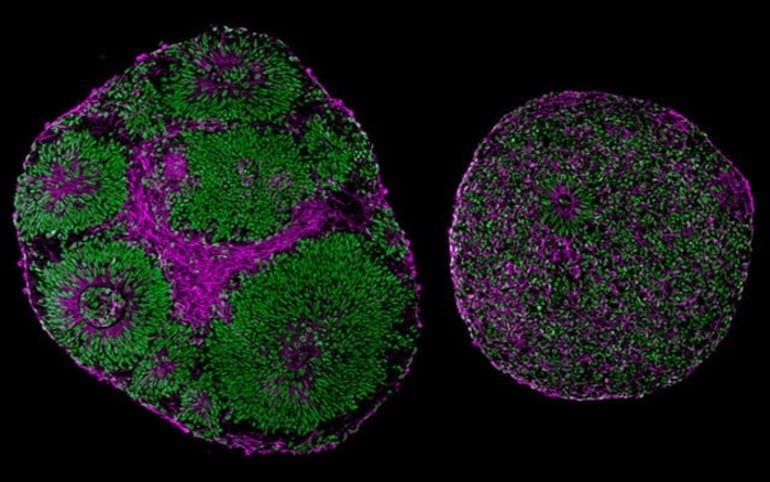 In a study published in Nature CommunicationScientists at the University of California, San Diego School of Medicine have used organoids from the human brain to reveal how a genetic mutation associated with a profound form of autism disrupts neural development.

The use of gene therapy tools to recover gene function has effectively rescued neuronal structure and function.

Several neurological and neuropsychiatric diseases, including autism spectrum disorders (ASD) and schizophrenia, have been associated with mutations in transcription factor 4 (TCF4), a gene essential for brain development.

Transcription factors regulate when other genes are turned on or off, so their presence, or absence, can have a domino effect on the developing embryo. Yet little is known about what happens to the human brain when TCF4 is mutated.

To explore this question, the researchers focused on Pitt-Hopkins syndrome, an ASD specifically caused by mutations in TCF4. Children with the genetic disorder have profound cognitive and motor impairments and are generally nonverbal.

Existing mouse models of Pitt-Hopkins syndrome fail to accurately mimic the neural characteristics of patients, so the UC San Diego team instead created a human research model of the disorder. Using stem cell technology, they converted patients’ skin cells into stem cells, which were then developed into three-dimensional brain organoids, or “mini-brains.”

Early observations of brain organoids revealed a multitude of structural and functional differences between the TCF4– the mutated samples and their controls.

“Even without a microscope, you could tell which brain organoid had the mutation,” said study lead author Alysson R. Muotri, PhD, professor at UC San Diego School of Medicine, director of the cell program. strains from UC San Diego and a member of the Sanford Consortium for Regenerative Medicine.

the TCF4-the mutated organoids were significantly smaller than the normal organoids, and many cells were not actually neurons, but neural progenitors. These simple cells are supposed to multiply and then become specialized brain cells, but in the mutated organoids, part of that process has gone wrong.

A series of experiments revealed that the TCF4 mutation led to downstream dysregulation of SOx genes and the Wnt pathway, two important molecular signals that guide embryonic cells to multiply, mature into neurons and migrate to the correct location in the brain.

Due to this deregulation, neural progenitors did not multiply efficiently and therefore fewer cortical neurons were produced. Cells that matured into neurons were less excitable than normal and often remained clumped together instead of organizing themselves into finely tuned neural circuits.

This atypical cellular architecture disrupted the flow of neuronal activity in the mutated brain organoid, which the authors believe likely contributes to impaired cognitive and motor function.

“We were surprised to see such significant developmental issues at all these different scales, and wondered what we could do to address them,” said first author Fabio Papes, PhD, associate professor at the University de Campinas and visiting researcher at UC. San Diego School of Medicine, who jointly supervised the work with Muotri. Popes has a relative with Pitt-Hopkins syndrome, which motivated him to study TCF4.

The team tested two different gene therapy strategies to rescue the functional gene in brain tissue. Both methods actually increased TCF4 and, in doing so, corrected Pitt-Hopkins syndrome phenotypes at the molecular, cellular, and electrophysiological scales.

“The fact that we can correct this gene and have the whole neural system recover, even at the functional level, is amazing,” Muotri said.

Muotri notes that these genetic interventions took place at a prenatal stage of brain development, whereas in a clinical setting, children would receive their diagnosis and treatment a few years later. Thus, clinical trials must first confirm whether subsequent intervention is still safe and effective.

The team is currently optimizing its recently licensed gene therapy tools for such a trial, in which spinal injections of the gene vector would hopefully recover TCF4 function in the brain.

“For these children and their loved ones, any improvement in motor-cognitive function and quality of life would be worth trying,” Muotri said.

“What’s really remarkable about this work is that these researchers are going beyond the lab and working hard to translate these discoveries into the clinic,” said Audrey Davidow, president of the Pitt Hopkins Research Foundation. “This is much more than an excellent academic paper; it is a true measure of what science, done well, can accomplish to hopefully change human lives for the better.

About this genetics and ASD research news

Transcription factor 4 (TCF4) has been associated with autism, schizophrenia and other neuropsychiatric disorders. However, how pathological TCF4 mutations affect human neural tissue is poorly understood.

We show that neuronal progenitors carrying these mutations have reduced proliferation and an impaired ability to differentiate into neurons.

We identify a mechanism by which TCF4 loss of function results in decreased Wnt signaling followed by decreased expression of SOx genes, resulting in reduced progenitor proliferation in vitro.

Additionally, we show reduced cortical neuron content and altered electrical activity in patient-derived organoids, phenotypes that were rescued after correction of TCF4 expression or by pharmacological modulation of Wnt signaling.

This work describes the pathological mechanisms in neural cells harboring TCF4 mutations and provides a potential target for therapeutic strategies for genetic disorders associated with this gene.