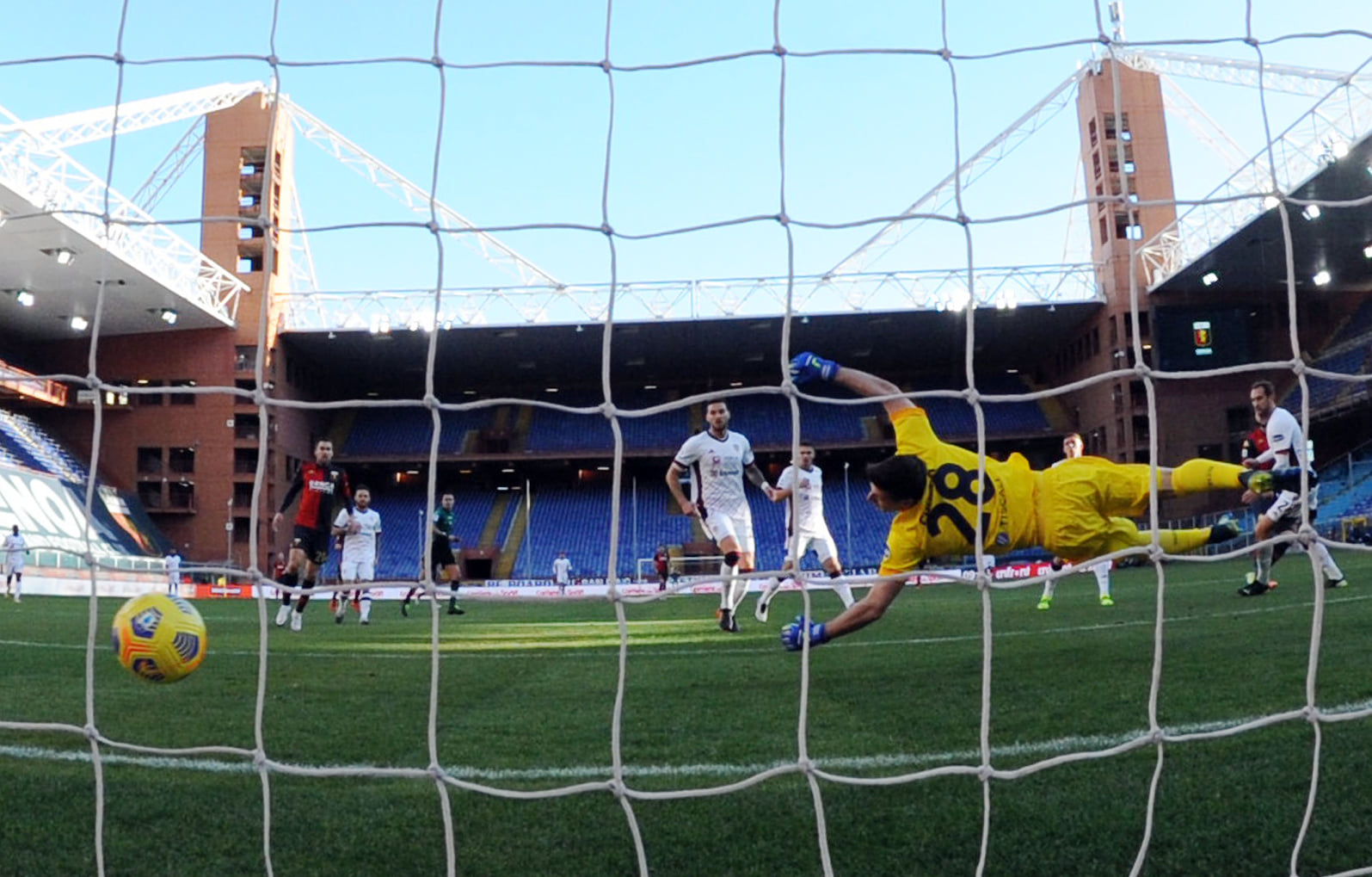 The balance of 33 previous home games with Cagliari (of which 32 at Ferraris and one on the neutral of Brescia, 22 in A and 11 in B) is decidedly favorable to Genoa: they are 18 victories for the Griffin, 10 draws and 5 Sardinian victories, 61-36 the calculation of the networks. At the level of Serie A alone, the balance sheet is 11 wins for Genoa, 8 draws and 3 Cagliari victories, 38-23 goals. There is also a precedent in the Italian Cup (a 4-1 victory in Cagliari on 27 October 1999).

The latest confrontation is dated 24 January 2021 (19th matchday, played behind closed doors for the Covid emergency): another victory for Ballardini’s Genoa who, thanks to a goal by Destro in the 10th minute after a good choral action, defeats the Sardinians in black crisis and with Di Francesco on the verge of exemption. A 1-0 a little liar because Genoa fails at least three clear chances to double and because Cagliari have as many to equalize.

Same result also on 9 February 2020 (23rd matchday). Nicola’s Genoa, fresh from the draw in Bergamo, faces Cagliari in Marassi and defeats them by playing well 1-0 thanks to a mocking cross by Pandev at 43 ′ that bags in the lower right corner of the goalkeeper Cragno. In the second half, Genoa plays well, almost doubling and only risks in the recovery with a crossbar hit by Nainggolan (CLICK HERE TO SEE THE IMAGES).

A suffered draw instead it was that of May 18, 2019 (penultimate day of the championship): in the advance of Saturday at 6pm, Prandelli’s Genoa, fresh from the defeat in Bergamo, must absolutely win to avoid the dramatic overtaking of Empoli that the next day faces the unmotivated Turin. At Cagliari, on the other hand, one point is enough to obtain mathematical salvation. Genoa creates several occasions but it is the guests with the classic goal of the former who pass with Pavoletti in the 40 ‘. In the second half the Grifone does not sting and Radu avoids the 0-2, but in the 90 ‘he takes advantage of a penalty for a touch of a convict hand of a defender in the area. Criscito signs the final 1-1 keeping alive the hopes of salvation.

Victory, on the other hand, was on April 3, 2018 (recovery of the 27th day not played due to the death of Davide Astori): 2-1 for Ballardini’s Genoa who obtain 3 important points in terms of salvation. All the goals in the second half (in the first half the Var takes a penalty away from Genoa): Lapadula unlocks the match at 53 ′, Barella draws on a penalty at 62 ′, Medeiros with a great goal at the end marks the final 2-1.

The fifth to last match is dated 21 August 2016 on the first day of the championship which marks Ivan Juric’s debut on the Genoa bench. Clear victory in the score (3-1) but quite painful. After a first half punctuated by unsuccessful attacks, Cagliari took the lead with the former Borriello in the 66th minute. The Sardinians hit a post with Sau but in the following action they suffer the same thanks to a great shot from distance by Ntcham in the 78th minute. Genoa at that point diliaga: Laxalt overturns the result a minute later and Rigoni closes the score for the final 3-1 in the 88th minute.

It was also victory on 11 April 2015, 30th matchday: 2-0 for Genoa led by Gasperini and launched towards the sixth final place. Niang and Iago Falque in six minutes at the beginning of the second half (52 ‘and 58’) dismiss the practice and bury the Sardinians who will be relegated at the end of the season. Not an easy victory because in the first half Zeman’s men hit three poles.

A curiosity concerns the draw. Before that of 2018, the last ever in Genoa dates back to May 26, 2002, the penultimate day of a very disappointing cadet championship for both teams who finish paired at 47 points with a margin of two lengths on the relegation zone. Genoa, led by Onofri, unlocked the match on a penalty in the 7th minute with Carparelli. A minute passed and Suazo equalized for the Sardinians. The Romanian Mihalcea brought the Grifone back in the 21st minute but before the interval Daniele Conti signed the 2-2. In the second half Genoa again took the lead in the 82nd minute with Francioso and again joined by Negri in the 87th minute for the definitive 3-3.

The last draw in Serie A dates back to April 15, 1995 (matchday 27). That day Maselli’s Genoa was in full battle for salvation and a win against Tabarez’s Cagliari, calm and mid-table, would have been convenient. After a few attempts by the Grifone, as often happens, however, it was the guests who took the lead with Dely Valdes in the 63rd minute. Fortunately the usual Skuhravy took care of putting things back in place in the 75th minute with a nice shot in the middle of the penalty area. At the end of the season Genoa in B after the “cursed” play-off with Padova and Cagliari in ninth place.

The last Sardinian success dates back to April 19, 2014, 34th matchday: 2-1 despite De Maio’s initial advantage from Genoa after just 3 minutes. Sau’s draw in the 37th minute and Ibarbo’s goal 8 minutes from the end sanction the invaluable success for the Sardinians in terms of salvation, confirming the crisis of Genoa, now in a quiet position in the middle of the table, in their fourth consecutive defeat.

The second recent success of Cagliari is the 1-0 on April 3, 2011 with a goal (controversy) by the former Robert Acquafresca in the 16 ‘of the first half. The Sardinians had not won in Genoa in Serie A since 3-2 on 8 November 1992: Padovano and Panucci for Genoa; Naples, Pusceddu and Oliveira for Cagliari.

In the 2012-2013 season the match was played on the first day of the championship and ended 2-0 for Genoa coached by De Canio thanks to goals scored in the second half by Merkel (the only goal in the Rossoblu jersey) and Immobile. In the first half Jorquera missed a penalty.

The other recent victories were: the 2-0 of 7 October 2007 (Borriello and Di Vaio), the 2-1 of 29 October 2008 (Papastathopoulos and Thiago Motta for Genoa, Bianco for Cagliari), the pyrotechnic 5-3 of 14 March 2010 (three poles from Genoa and then Dessena in the 17 ‘for Cagliari, draw and overtake with Zapater on a penalty in the 36’ and Palacio on 39, a guest draw by Conti in the 41 ‘, two more Genoa goals with Sculli in the 43’ and Marco Rossi at 45 ‘, 4-3 with Matri on a penalty at 55’ and definitive 5-3 with Milanetto at 59 ‘), the very important 2-1 on 2 May 2012 played in Brescia due to the disqualification of Ferraris for the facts of Genoa -Siena (Palacio in the 12th minute, Ariaudo’s immediate equalizer in the 13th minute and a fundamental goal for Jankovic’s salvation from a free kick in the 76th minute).

The first official match played in Genoa between the two teams is dated 7 October 1934 in Serie B, group A. The then autarchic Genoa 1893, newly relegated from Serie A, wants to get back up immediately and, after having beaten Legnano on the first day (2-0), repeats with identical score to Ferraris with the islanders thanks to Libero Marchini’s brace in the 29th and 68th minutes. In the end, Genoa will win the championship with 42 points and return to the top flight, while Cagliari will finish the season in ninth place at 30.

In the end, the first match in Serie A is dated January 3, 1965: 1-1 in five minutes before Gigi Riva from Cagliari in the 52nd minute and then the Genoa player Zigoni in the 57th minute.

Francesco Patrone
REPRODUCTION OF THE ARTICLE PERMITTED ONLY FOR EXTRACT PRIOR MENTION FROM THE SOURCE: WWW.PIANETAGENOA1893.NET