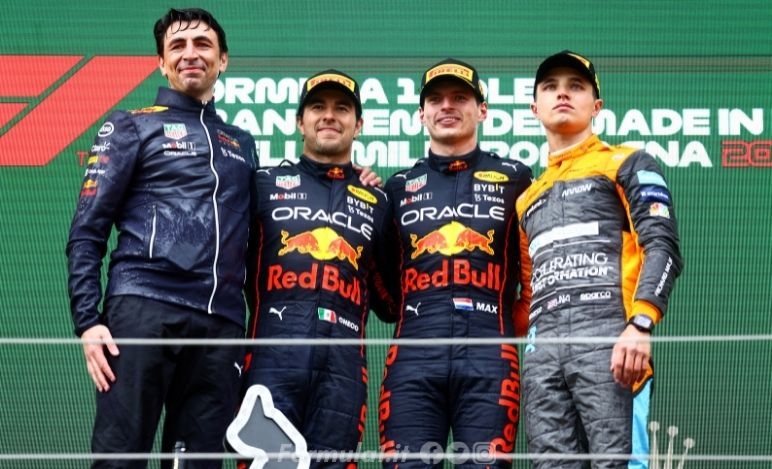 It had to be the weekend of the celebration, of the great made in Italy party, understood as Ferrari, in Imola. Everything seemed ready for a Rosso success on Italian soil, but the GP held at the Enzo and Dino Ferrari racetrack in Imola turned into a celebration of made in Netherland, since there was a solo by Max Verstappen.
This is in fact the fourth round of the 2022 Formula One World Championship which, despite an absolute dominator, has reserved many surprises in terms of team performance.

The Made In Italy and Emilia-Romagna GP, thanks to the various episodes that followed, produced 63 shows, twists, and duels from the first lap.
The GP raced on the banks of the Santerno, as mentioned, was full of action on the track, twists and turns for the fans.
Emotions especially for the fans of the Red Bullsince after the usual 300 km of race, approximately, the RB18 of Max Verstappen triumphed, followed by the second Red Bull of Checo Perez.
Lando closes the podium Norris up McLaren.

The fourth round of the season reserved some surprises, in terms of performance, among the various teams. Among the confirmations we find Red Bull, in great shape and able to dominate the weekend, while Ferrari appeared fast but in trouble compared to direct rivals. Not bad Mercedes, at least that of Russell, detached from the top battle, but still able to place the car in the points.
They were disappointing Williams and Alpine, while Haas, Aston and Mclaren showed good form, especially the team from Woking, who returned to the podium.

Speaking of the race in the strict sense, the action on the track was of quality, with overtaking, rain and safety car.
Having fulfilled these premises, let’s analyze the performance of teams and drivers during the Made in Italy and Emilia-Romagna Grand Prix with our report cards.

Two-sided, two-level weekend for the Mercedes team. Bad car in qualifying and sprint race, better in the race, at least with a driver. It is urgent to find the square of the W13.

Hamilton: 2
Bad weekend for Lewis, in the rear for all three days, unwatchable in the race. Called to show why he is seven times world champion.

Russell: 8
Only thanks to him the weekend Mercedes is saved, at least in part. Bad in qualifying and in the sprint, he makes a great comeback in the race, finishing fifth.

They return to the top and do it with arrogance. Working developments, newfound reliability and top performance. This is enough to regulate Ferrari and score a double.

Verstappen: 10
Absolute dominator of the Imola weekend, poleman on Friday, winner of the sprint and impeccable winner of the GP. Only applause.

Perez: 8
Excellent weekend for Checo, not so much in qualifying, but in the two races. On Sunday he starts well, climbs into second position and manages great until the finish line.

There was supposed to be the big Ferrari party in Imola, but instead there was the big disappointment. Car not at the top since Friday, unfortunate episodes and bungling drivers create a GP to forget.

Leclerc: 4
Well in qualifying and in the sprint race. In the race it does not thrill, also due to a mediocre Ferrari. He wants to overdo it to pass Perez but he makes a mistake and compromises the race. Unjustifiable mistake for those aiming for the world championship.

Sainz: NC
Do not classificationbile since his GP lasts a curve, after being hit by Ricciardo. In reality, however, he too was not without mistakes over the weekend. Reset urgently.

Even if their weekend is two-sided, the steps forward since the beginning of the year are remarkable and, thanks to a dull Ferrari, they hit the first podium of the season. Now we need continuity.

Norris: 9
Solid since Friday. This is Lando’s weekend who, after a super qualifying, finishes third in the race, demolishing Ricciardo.

Ricciardo: 2
Not a good weekend for Daniel, which he makes bad at the first corner, hitting Sainz and putting him KO, ruining the race, all lived in the very last position

After a bad start to the season, they raise their heads, entering Q3 and putting two cars in the points. They must find continuity and ensure that Imola is not a “one-off”.

Vettel: 8
Show the world that, when he doesn’t have a bad car on his hands (like in the first races), he can still do well. Enter Q3 and score points. The best with the AMR22.

Stroll: 6
After the bad start to the season, it’s not bad at Imola. Solid race, without errors, fight in the middle of the group and finished in the top 10. Really good.

After a good start to the season, they confirm that they are fast, at least in qualifying. In the race they are relegated, despite the upgrades brought. Again, there is no lack of reliability problems.

Alonso: 6
Unlucky weekend for Fernando. Fast since Friday. In the race he was hit in the early laps and the bodywork of his Alpine gave way in the belly area, leading him to retire, yet another year.

Or with: 5.5
Negative weekend, especially for the final result, for Esteban. Despite everything it continues to be constant and free from errors. In Imola, however, something goes wrong and at the finish line he is 14th. Turn the page already in Miami.

They have been going up and down since the first race. At Imola they play at home and, after several not exactly favorable episodes, they still manage to bring home a good haul of points.

Gasly: 5.5
Difficult GP for Pierre, as the French driver gets into trouble by hitting Zhou in the sprint. In doing so he is forced to a comeback race, which ended in p12, after winning a tough duel with Hamilton.

Tsunoda: 8.5
After a year and a half in F1, for the first time he is the author of a great weekend, solid both qualifying and race, absolutely free from errors. He ends in P7. Good boy.

They continue to prove really fast, probably the surprise of the season, along with the Haas. They enter Q3 and are easily in the top 10. Just keep the shot to take off a lot of satisfaction.

Bottas: 8.5
Driver reborn after his passage to the Alfa team. Even in Imola he is really consistent, both in qualifying (where he enters the top 10), and in the race, easily finished in points, a great fifth.

Zhou: 6
Weekend not without bad luck for Zhou. Any chance of a result is precluded by the crash with Gasly during the sprint. In the race, he is forced to recover, which ended no later than 15th place.

After the misstep in Melbourne, the American team returns to do well on the banks of the Santerno, putting a car in Q3 and in the points. Now we need to find a way to travel in two directions …

Schumacher: 5
Subdued weekend for Mick who, since Friday, is lagging behind Magnussen. In the race he starts well but then makes a mistake at the Variante Alta, turning around and finishing 17th.

Magnussen: 8
He continues to prove extremely competitive after a fantastic start to the season. In qualifying he is extraordinary fourth, determined like a lion in the push and in the race, in the end he is ninth.

After the good points race in Melbourne, the Williams team returns to sail at the bottom of the group, bringing home a zero again. Difficult season that, without episodes, will prove stingy with satisfactions.

Albon: 8
With the car he has, he doesn’t get into the points for a very short time, which is a really good result. In the end he is only eleventh, but firmly ahead of Latifi.

Latifi: 5
Ok, Williams is disappointing, but Latifi it does nothing to improve the situation. He is not wrong all weekend, but he is consistently beaten by Albon.

Filed the GP of Made in Italy and Emilia-Romagna, F1 gives an appointment to its fans in two weeks for the GP of Miami, Florida.

All the news, photos, weather, session times and times of the 2022 Emilia Romagna Grand Prix