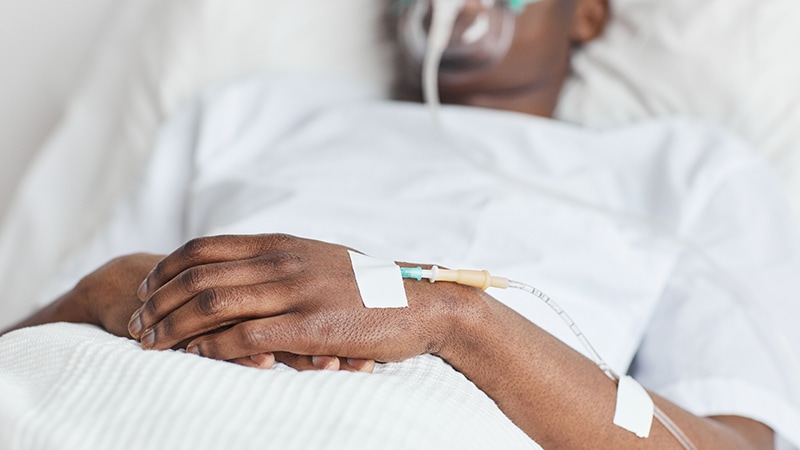 Black patients with psychiatric disorders in hospital emergency departments across the United States have significantly higher rates of chemical restraint than their white counterparts, new research has found.

Results of a national study showed that black patients presenting to the emergency room were 63% more likely to receive chemical sedation than white patients. Investigators also found that white patients were more likely to receive chemical sedation in hospitals with a higher proportion of black patients – a finding that suggests hospital demographics influence practice patterns and that structural racism may be a factor. root cause.

“There is a wide disparity in the rates at which patients who present to emergency departments nationwide in the United States are retained by race. You are 63% more likely, for the same set of primary complaints, to being chemically sedated if you’re black vs if you’re white,” said lead researcher Ari Friedman, MD, PhD, assistant professor of emergency medicine and medical ethics and health policy at the University of Pennsylvania. , in Philadelphia. Medscape Medical News.

“The main mediator of this difference is the institution you are in – hospitals that primarily serve black patients are more likely to chemically sedate their patients for these main complaints – including white patients. So it is publicized by practice model and environment,” Friedman added.

The study was published in the May issue of Annals of Epidemiology.

Chemical sedation, also known as chemical restraint, is used to calm and help protect patients from harming themselves or others. Previous research on racial differences in the care of psychiatric emergency patients with agitation suggests that there may be disparities in treatment.

“Previous research conducted at individual institutions has shown that black patients are more likely than white patients to be physically restrained, and this has been shown to be true in adult patients and pediatric patients,” the author said. Principal Utsha Khatri, MD, assistant professor of emergency medicine. at the Icahn School of Medicine in New York, said Medscape Medical News.

Specifically, two single-facility studies in the past year found similar disparities, with higher rates of physical restraint for black and Hispanic psychiatric patients in the emergency room. Another recent study showed an association with race, ethnicity, and use of pharmacological restraint in pediatric patients presenting to the emergency department with mental health issues.

“There has been work in psychiatry on disparities in this setting, although there has been less work in emergency departments,” Friedman said. “We looked at all US emergency departments rather than within a single health care system. The main trade-offs for us were that we were not able to comply with restraint orders, which are only found not in the national datasets, so we had to make inferences based on the type of drugs given.”

For the study, investigators analyzed data from 2008 to 2018 through the National Hospital Ambulatory Medical Survey (NHAMCS) database. They examined the association of race and the administration of chemical sedation, with either an antipsychotic or ketamine, in emergency room visits for psychiatric disorders. This was any visit for which the reason for the visit was “symptoms related to psychological and mental disorders”.

Of the 76.2 million total ER visits assessed, researchers found that black patients with a psychiatric disorder were significantly more likely to receive chemical sedation with antipsychotics or ketamine than white patients with the same conditions ( 5.3% versus 3.0%; P < .01). This difference remains significant when admission or transfer to a psychiatric institution is taken into account.

Fighting the forces of racism

When the researchers took into account the percentage of the hospital population that was black, they found that patient race no longer affected the likelihood of chemical restraint.

“We found that the main source of this racial disparity in the use of chemical sedation is that hospitals that treat a higher proportion of black patients tend to use more sedation,” Khatri said. .

“Our results suggest that patients presenting to hospitals that serve a 60% black patient population would have [a] about 1.8 times the likelihood of receiving chemical sedation compared to a hospital serving a 10% black population,” she added.

“When a hospital has fewer resources, it often does not have the staff or the time to defuse a patient in distress, and may resort to chemical sedation more quickly than a hospital with enough staff and resources,” Friedman said in an outing.

Khatri added that the study highlights the need to combat the forces of racism by focusing not just on provider biases, but by addressing the “underlying structural issues that lead black patients to get less.” good care depending on where they live”.

“Hospitals have an unequal distribution of resources and quality, largely modeled on the racial makeup of their patients. Dedicated training and funding in de-escalation techniques along with sufficient staff and the availability of outpatient mental health care can help ensure patient and staff safety by reducing the use of physical restraint and chemical sedation in appropriate circumstances,” said Khatri.

Friedman noted that there will always be a need to use restraint to facilitate rapid medical assessment and stabilization of patients, but “we want to make it as humane, thoughtful, and rare as possible, and have a broad arsenal alternative strategies that can be applied equitably in all emergency departments.”

Need for widespread and systemic change

Commenting on the findings of Medscape Medical NewsRegina James, MD, chief of diversity and health equity for the American Psychiatric Association and associate medical director, said the large-scale study confirms the widespread existence of racial and ethnic disparities among patients with psychiatric disorders.

“This study and previous studies, not only in psychiatry but in other areas of medicine, all highlight that there continues to be evidence of racial and ethnic disparities in health care, and that is consistent across a range of diseases and health services,” says Jacques.

“It is important that when we think about the solution, we also think about the etiology of the problem and the layers that contributed to it – understanding, embracing and acknowledging that these differences did not arise de novo. These are policies, practices, and behaviors that got us to this point, and it will be the policies, practices, and behaviors that are going to take us away from this point,” James noted.

She added that future research should focus on better understanding what factors exacerbate agitation in patients and what resources are directed at the hospital level, including de-escalation training, nursing staff and room crowding. waiting, may be effective in reducing the use of chemical sedation when clinically appropriate.

The authors and James report no relevant financial conflicts of interest.