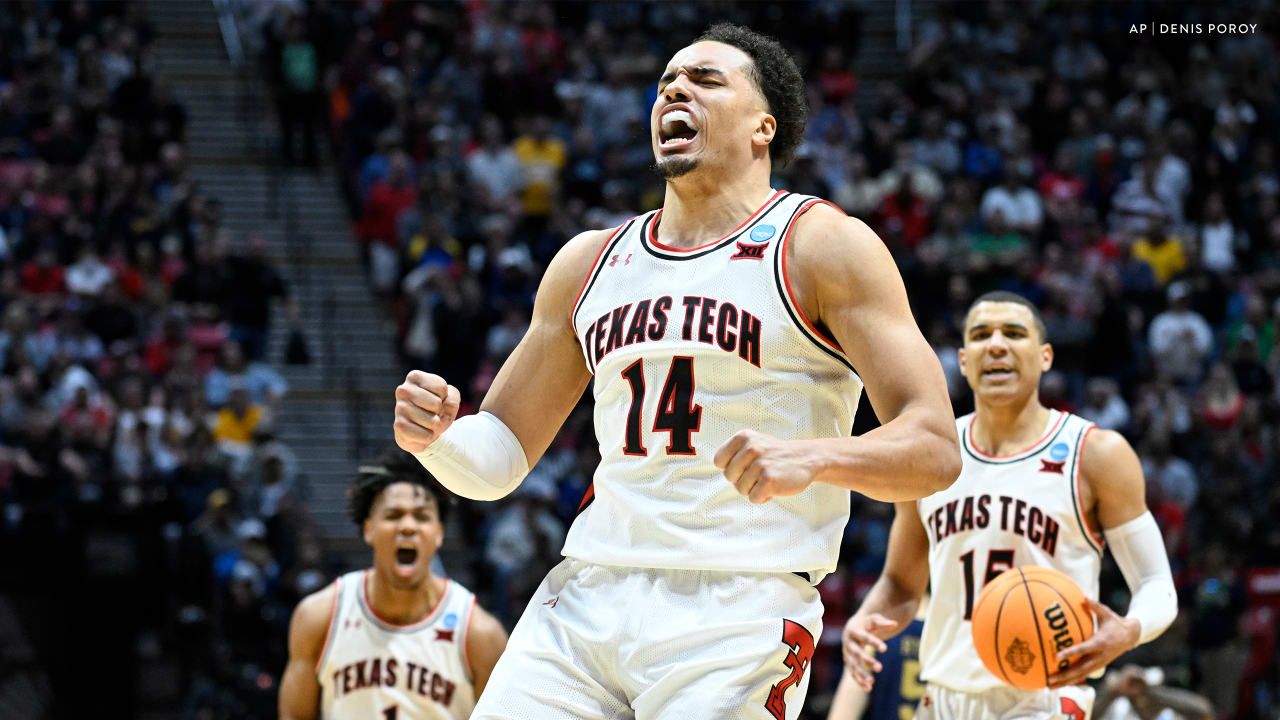 Marcus Santos-Silva’s door in football only opened a month after his basketball door closed.

Santos-Silva, who has spent his entire college sports career as a basketball player, signed a contract Monday with the Browns as an undrafted rookie. Thirty-nine days prior, he had played his last college hoops game as a power forward at Texas Tech — a Sweet 16 loss to Duke in the NCAA Tournament. At 6-foot-6 and 260 pounds, Santos-Silva had NBA aspirations when he transferred to Texas Tech in 2020 after three seasons at VCU, hoping the biggest stage and toughest opponents would draw calls from teams. professionals at the end of his last season.

Professional teams have indeed called Santos-Silva, but not from the league he expected.

Many NFL teams reached out to him when he officially announced his aspirations to join the league as a tight end on April 25. He was in Cleveland a week later after the Browns were one of nearly a dozen teams to contact him and were the only team to offer him one-on-one coaching. Santos-Silva finished the session and, to his surprise, was offered a contract before he could leave CrossCountry Mortgage Campus.

“I was just like, ‘Wow,'” he said. “Honestly, I thought I was going to go home and they were either going to call me or not call me. I just didn’t expect things to happen so quickly. It always hits me. “

Santos-Silva, a native of Taunton, Massachusetts, hasn’t played football since his junior year of high school. He held various positions that season, including defensive end, tight end and kicker, but a growth spurt that year led him to focus on basketball for the rest of the season. high school and university. He was a three-star recruit and started his college career in 2017 at VCU, where his rebounding and blocking abilities were among the best in the Atlantic 10 in his freshman year. He transferred to Texas Tech in 2020 and received an extra year of eligibility — giving him two years at Lubbock — after the NCAA granted student athletes an extra year after the pandemic.

Santos-Silva averaged 15 minutes, 4.7 points per game and 4.1 rebounds per game last year at Texas Tech. Those numbers were good enough for a rotational role with the Red Raiders, but Santos-Silva’s dream of playing in the NBA was struggling to materialize. He had no interest in playing in a professional league overseas either, after losing his father to COVID-19 in 2021 and wanted to stay closer to his mother and two siblings.

Days after Texas Tech fell to Duke, Santos-Silva received a call from Sammy Morris, assistant director of player support development for Texas Tech’s football program. Morris informed him that he was getting calls from NFL teams asking if he would be ready to play.

Initially, Santos-Silva said “no”. He wasn’t ready to quit the NBA just yet.

“I was blessed for that,” he said, “but I told them I was going to let it go and keep focusing on basketball.”

However, Santos-Silva watched Texas Tech’s pro day of football and his interest in changing the sport began to grow. He saw how tight ends ran routes and caught passes, and he thought he was athletic enough to do the same. Sure, his playbook knowledge, football IQ, and blocking skills were going to need major improvements, but Texas Tech coaches and NFL agents told him he could make the switch if he wanted to. was involved in sports.

In the weeks following pro day, he completed several workouts with friends who played college football to get in shape for a tryout. He signed an agency deal with The Sports and Entertainment Group and officially announced his NFL aspirations three days before the draft.

Highlights were the only visual evidence Al-Khayyal could use to assess him. Al-Khayyal had been a scout with the Browns for six years, but he also had a keen eye for the skills of the forward position, which he played at the AAU level in Atlanta. This experience gave him an appreciation for the handwork, footwork and lateral agility needed to play forward, and all of these traits were evident at a high level in Santos-Silva’s play.

“There was enough plot here, and it was worth exploring further,” Al-Khayyal said. “With basketball you have guys who are athletic enough but not always tall enough or strong and physical enough to play football. But there are also guys with length, ball skills and general basics. that are hard to find no matter where you look.”

Santos-Silva practiced for an hour in front of Al-Khayyal, Berry and other Browns coaches and scouts and performed a variety of on-air drills and routes. His run looked flawless for an athlete who hadn’t played organized football in over eight years, and he didn’t drop a pass either.

“You could see he was obviously raw,” Al-Khayyal said, “but speaking with him and researching it, it wasn’t like it was totally alien to him. In that coaching setting, you could see he had the size, length, strength and physical traits you are looking for in this position, especially in a developing player.”

Al-Khayyal told Santos-Silva after practice that the Browns were signing him. Initially, Santos-Silva thought this only meant he was being invited back for rookie minicamp, so his reaction was muted.

The news actually meant that he had signed a real contract with the NFL. The Browns were giving him a chance to develop his skills under coach Kevin Stefanski, who greatly appreciates tight ends, and spend the offseason with the same team rather than bouncing from opportunity to opportunity at across the country – if other opportunities arise.

Santos-Silva’s jaw dropped when Al-Khayyal explained what the contract really meant. For now, he was locked up in Cleveland and was officially an NFL player.

“I was just laughing,” Santos-Silva said. “I was in shock, like, ‘Oh my God.’ I didn’t think it was going to happen so quickly.”

Santos-Silva said he plans to learn as much as possible from top tight ends David Njoku and Harrison Bryant in hopes of cracking a 53-man roster, although he acknowledged he has a lot of work ahead of him to achieve this goal.

“My goal this year is to make the 53-man roster and be a second-tier tight end,” he said. “I know the plan is probably to get me started on the practice squad, but I’m just going to work and grind all the time to be able to get there.”

Santos-Silva has also been in constant contact with Colts tight end Mo Alie-Cox, whose career began on the same trajectory as Santos-Silva. Both attended VCU, which is how they met, and Alie-Cox signed with the Colts as an undrafted free agent in 2017 following his college basketball career. He also hadn’t played organized football since his junior year of high school.

Alie-Cox was waived several times and spent time on the practice squad before becoming a bigger player on the Colts’ offense. He caught six combined touchdowns over the past two seasons and signed a contract extension in March.

“I asked him, ‘Hey, what have been the biggest struggles for you? ‘” Santos-Silva said. “He told me the thing that would be hard would be learning the playbook and learning how to block, but once I figure that out everything else will be fine. That will be my main focus when I I’ll make it.”

Santos-Silva knows he has countless hours of work ahead of him in the offseason to learn how to play in the NFL. It’s a tall order, but he’s already learned enough in the past month and shown the athletic tools a team needs to give him a contract.

Because of this, the football door for Santos-Silva is wide open, and he hopes to walk through it in Cleveland.

“When I got home, I just thought, ‘Wow, I’m really into the NFL. I’m really a Cleveland Browns player,'” he said. “I’m not satisfied, but I feel really lucky to have this opportunity.”