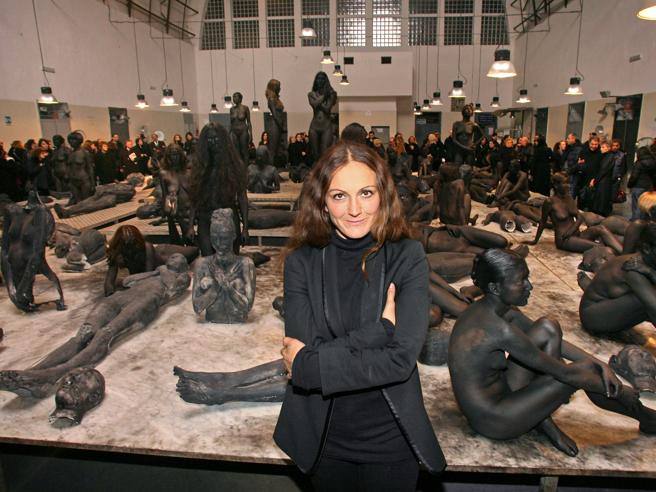 The artist: «The living paintings? It is a pain to see them vanish. ” Childhood on the lake: «My mother took me away from London when I was very young, she wanted to be alone on Lake Garda. I was a child without a TV, without a telephone, without a car and without a father … “

“Do you want to know why I left Italy twenty-five years ago?”

Maybe she didn’t feel understood, it happens?
“But maybe! I wish I had been little understood, little understood, little appreciated. I left for the exact opposite. I did performances by putting on naked women with the hope that the audience would be indignant. I wanted to create a conflict and instead nothing: they came to see me, they were not scandalized, they said things like “it’s a transposition into the contemporaneity of Piero della Francesca!”. There is too much culture in Italy, too much. Culture always makes me uncomfortable. Instead of enrolling in art school, I wanted to do classical studies, study Greek and Latin. I don’t know anything today. It also makes me uncomfortable to go to Sicily: everyone knows everything there and instead I feel I don’t have the basis to understand what is there, I feel inadequate ».

“I needed a more ignorant public to conflict with, the United States is. Just think, after so many years they still look at me with suspicion ».

He will be happy about it.
«Not so much now, it has tired me a little. To be there to fight, as if I were a veteran, maybe I don’t want to anymore. Actually, I don’t even know what I want. They are like the book that I have been carrying around since 2011: I write, delete, rewrite and redo. You saw Kraus, you want to help me complete it ».

Chris Kraus, the author of “I love dick”?
“She. Many intellectuals over there snub me, Kraus instead says that I am “a genius”. He tells me not to change anymore, not to touch anything anymore. “It’s a book of interviews, Vanessa: transcribe, cut, print, stop” ».

The living pictures of Vanessa Beecroft have made her one of the most famous Italian artists in the world. Her performances – which mainly staged women and ranged from eating disorders to “genetic diversity”, chasing the mirage of “human equality” – caused public and critics to discuss everywhere. Born in Genoa in 1969, Italian mother and British father, childhood on Lake Garda, artistic high school in Genoa, Brera academy, then the celebrity in Italy and in the USA, where she has collaborated for years with rapper Kanye West, Beecroft is in these days in Rome for an inspection in Cinecittà. The president of the Istituto Luce-Cinecittà Chiara Sbarigia, after a long exchange of e-mails and without ever having ever even spoken to her on the phone, convinced her to close a triptych of exhibitions in which she reflects on the relationship between women and candies. It is called «Monuments women», with a reference to the film «Monuments men» by George Clooney. Beecroft’s performance in the autumn will be the highlight of the show. Beecroft and Sbarigia understood each other thanks to a code of their own, perhaps generated by the fact that they both grew up in families that had chosen not to have television. “I,” Beecroft adds, “didn’t even have a phone.”

What else did you miss as a child?
“All. I was a “child without”. Without television, without telephone, without father, without church, without boys, without cars. My mum took me away from London very little, like a refugee. She wanted to be alone, in the countryside, between her readings and her music ».

Did she miss her dad?
“Very, very much. He would send me letters, read them and cry. I kept looking at her photo, she looked like Michael Caine. Dandy, chic, impeccable in taste and in the way of dressing, a true British: the exact opposite of my mother ».

Did he blame his mom for this lack?

“A bit’. However I was a good child. We went to live on Lake Garda, in the midst of nature. I was a happy child but a little alienated ».

Did he have any other siblings?

“One. But my mom sent him to live with his grandparents. She was too young for two children. Already from elementary school I went to school on foot, free. With my friend, who arrived by car accompanied by her father, we would meet in front of the grocery store: she took sandwiches and snacks, I nothing ».

Were you fasting all morning?
«An apple brought from home, stop. As for snacks and the like, my mother claimed that if I had even tasted them I would have become stupid. I was terrified of being stupid, so I stayed away. I looked at my mates eating, what do I know, some potato chips in bags and to myself I thought “oh my God, these are all getting stupid”. What was true of food, was also true of music. So we listened to Enzo Jannacci going up, towards classical music ».

She has four children.
“Three boys and one girl: the oldest twenty years old, the youngest nine. Do you want to ask me if I too have become like my mom? I am a bit like her, a bit the opposite. I’m the other way around when I’m too on my kids, while my mom basically let me grow up on my own; but I’m also a bit like her when I frighten them about the things that make them stupid. ”

“Not only. In my house there is a ban on talking about money and brands. I tell my children: you can buy and wear brands but you must never name them. Anyone who talks about brands becomes stupid ».

You have been heavily criticized by the art world for having associated your name with so many brands.
«I choose to work with brands with which I can open a conflict, fight them from within. Had Vuitton expanded in the era of colonialism? Well, in my performance I emptied their shelves on the Champs-Élysées and put together some black and white girls, crammed together as if they were dressed. At the time, Marc Jacobs was there: I had his stuff put away, I brought back the old trunks that were in their museum ».

She will have become very rich.

«If I had wanted to go along with the market, I would have complicated my life much less than I did. I look for a kind of conflict, always. But in America you can’t survive if you have this kind of perennial struggle with everyone. I have always quarreled with gallery owners. I did not accept Gagosian’s conditions, I left slamming the door, often making mistakes ».

Is it from the left?

«I would define myself as a Marxist in purity, in the sense of the aesthetics of Marx and Engels. At the beginning I also said it in the United States, then I stopped repeating it because they looked at me badly ».

Has she fallen in love many times?

“Maybe a lot, maybe never. I do not know. My two husbands left me both and the same way. Without scenes, without fights, without betrayals, without bad things. One day they got up, opened the door, left. The first in eight years was the man who brought me to Los Angeles in 2008 because he was hired to work at Warner Bros.; with the second we were together thirteen years, he left home last year. Maybe they couldn’t stand my way of being anymore, my way of life exasperated them. And so, after twenty years of being married, I’m now alone and I don’t even know how to move. This thing makes me sad but sometimes happy, what will happen to me scares me and makes me curious ».

The partnership with rapper Kanye West?
«It was born at the end of my first marriage. He had been looking for me for months but I didn’t answer the phone. I didn’t even know who she was. We still work together today but it’s not a fixed thing: sometimes he pays me and sometimes he doesn’t, sometimes he gives me a lot of money to do nothing, he goes in periods. We communicate through assistants because I, so to speak, have social problems (smiles,
ed
) and I don’t have direct relationships with many people. Among other things he asked me to work with his wife Kim Kardashian to make it a little more refined and I did it ».

You don’t draw pictures or make sculptures. Nothing remains of her performance. What do you feel in the end?

“My heart breaks every time. Some girls who have worked for me sometimes come back to see me but I pretend not to recognize them, for me they end up together with the work. It pains me and I like this sense of nothing that remains at the end of everything. I see my performances and I don’t like anything, I would change everything. The time to understand that they have been appreciated by others and have already disappeared, I can’t help it ».

Why did you choose the artistic high school and not the classical high school you liked so much?
“I felt, how to say, ‘called’. And I answered ».

Try to imagine how art history manuals will describe it in a hundred years.

“Something like” Vanessa Beecroft, born in Genoa, lived etcetera etcetera etcetera, is responsible for the invention of groups of women organized in geometric formations, which from an initial erect position fall apart on the ground in an Aristotelian unity of time, place and action; each group is in constant conflict with the public ”».

Do you recognize yourself?

“Actually no. I am nobody. I wake up in the morning and I don’t know what I do, if the works I stage are really mine, if the beautiful children I have are mine, if I really did these things. Or not”.

What do your children say about your work?
“My children know nothing of what I do. We went to Palazzo Abatellis, in Palermo, a place I love. The director, seeing me, ran to me shouting “Vanessa Beecroft!”, Other people turned around. My children looked at me as if to say “but why do they know you?” ».

Did they ask you what your job is?