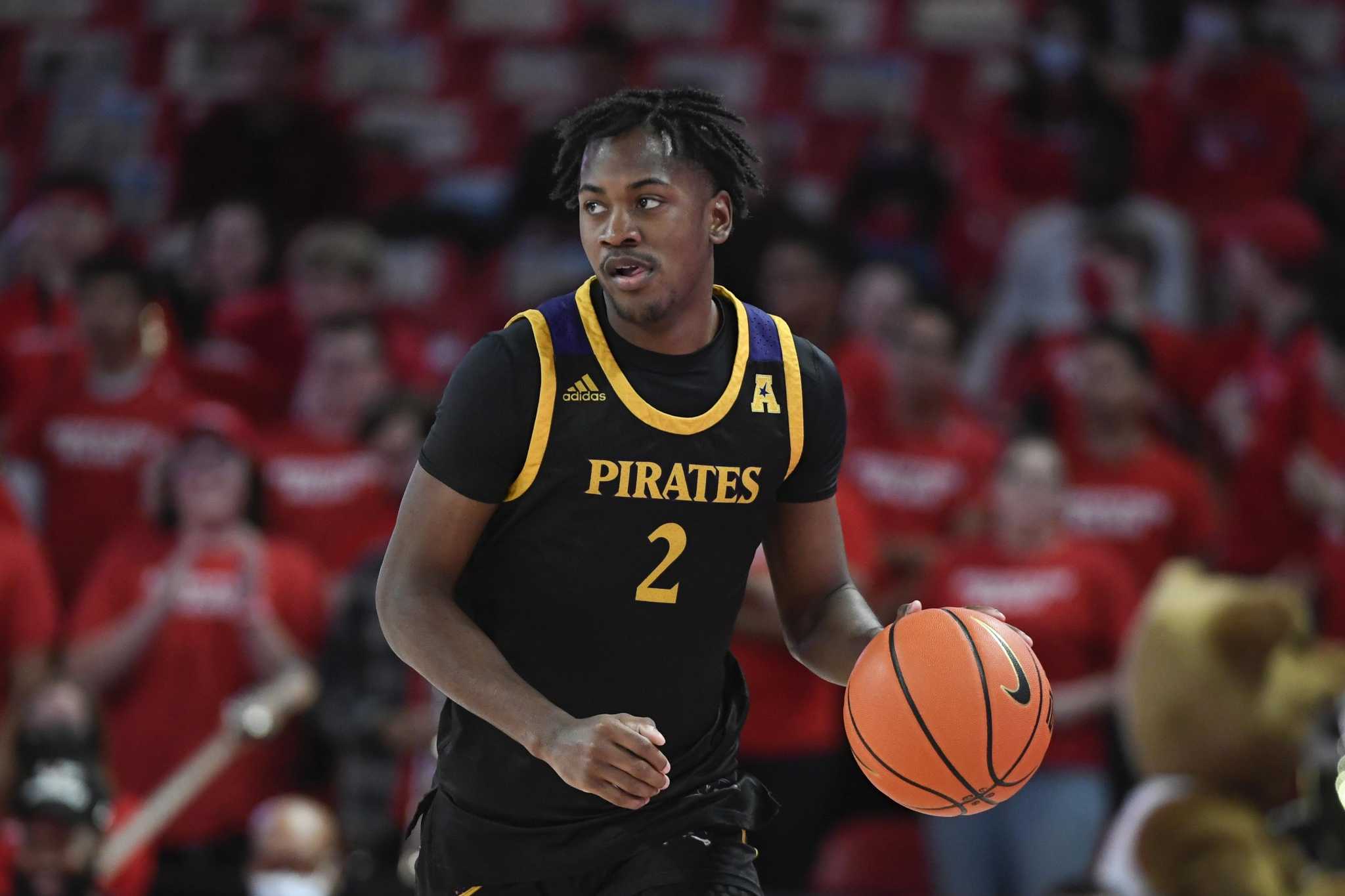 Tristen Newton visited East Carolina University’s compliance office just over a month ago and revealed he would be entering the NCAA transfer portal.

He filled out paperwork and gave it to a compliance officer, who then entered Newton’s name on the portal’s website.

“And it’s like 40 seconds later that I got a call,” Newton said.

He wasn’t exaggerating. Wichita State head coach Isaac Brown was the quickest of about 40 or 50 coaches to call, text or direct message Newton over the next few days. Once he received a call from UConn Men’s Basketball team, his decision was practically made. After an official visit to Storrs, Newton committed to the Huskies on April 13.

Admittedly, the transfer portal has had mixed results for the more than 1,500 male college basketball players who have entered the portal over the past two months. Newton has nothing to complain about.

“It was a good process,” he said. “I got the calls I wanted. UConn was pretty much at the top of the list, because I saw their style of play and how I fit in.

Players like Newton and former UConn forward Akok Akok are high profile players who have caught the attention of Power Five programs.

For Tyler Thomas, the process of transfer from a mid-major program (Sacred Heart) to another (Hofstra) was “hectic” at first, but eventually worked out to his satisfaction.

“I think it’s a good thing,” Thomas said of the one-time transfer rule that has clogged the portal for the past two years. “Coaches can leave whenever they want. If a player wants to find a new situation, because it’s not up to his standards, I think the player should be able to go for it.

Even extras looking to transfer are entering the portal, as Matt Garry recently did after four years at UConn. He hasn’t chosen a school yet, but is looking for a Division III program in the New England area.

For a double-digit scorer, a walk-on, or anyone in between, the process of entering the portal is pretty straightforward and similar for all: a journey to compliance, paperwork, sometimes an animated video of 15 minutes explaining what entering the portal entails. . Then, so: your name, phone number and email address are entered into the portal, in view of any Division 1 coach.

And not just the coaches. While the portal is supposed to be available only to coaches, many happily provide their passwords to members of the national media and recruiting analysts, who can tweet the names of any new entry to the portal within seconds. According to an industry source, there is a recruitment site that employs several people to take turns following the portal every second of the day.

The NCAA doesn’t want that and tried to make it harder this year by requiring entry of a passcode as an added layer of protection. All that now means is that coaches have to text the access code to a reporter/analyst, and that person has access to the portal site for a week.

Such is the configuration of the college basketball recruiting landscape these days. Similar to recruiting high school/prep players in some ways, but very different in others.

Akok Akok has had some awesome lunch dates over the past few weeks.

One day, the 6-foot-9 forward had lunch with Bob Huggins, the longtime West Virginia head coach who was recently inducted into the Basketball Hall of Fame. Another, he tied up with Jeff Capel, who got the Pittsburgh head coaching job shortly after Dan Hurley picked UConn over Pitt. More recently, Akok met an assistant coach from Ohio State.

Even with Akok still enrolled and taking classes at UConn, all three meetings took place at Storrs. Not on campus, however; Akok hopped in his car and did the three tours at a location just off campus.

“They could have come to campus,” explained Vin Pastore, Akok’s AAU coach, “but he decided to go off-campus for all of his meetings. He thought it was a little disrespectful to be on campus.

Still, the thought of a future Hall of Famer like Huggins, along with coaches from two other Power Five programs, walking distance from Hurley’s office while trying to woo a player still enrolled at UConn is a great one. example of how unique the transfer recruiting process has become.

Once Akok decided he wanted to transfer, he met Hurley in what Hurley described as an emotional scene. He went to compliance to get the proper paperwork, then returned to his dorm to sit on his decision for a day.

Finally convinced that it was his best decision, Akok brought the documents into compliance and found himself on the portal “within minutes”, according to Pastore.

Akok attracted interest from many schools but eventually made it to Georgetown, West Virginia and Pitt (Ohio State joined his recruiting a little too late). As is the case with high school/prep players, rookies can make up to five official visits, accompanied by up to two guests. Akok visited these three schools on his own.

Last week, he got involved in Georgetown. And unlike high school recruits, who a school needs a signed national letter of intent before they can announce the commitment and staff can speak publicly about them, Akok’s commitment was made public by the school in a few days. Once a school receives the signed financial aid agreement of a transfer, it is a done deal.

“The process worked quite well”

Thomas has averaged over 17 points per game over the past two seasons at Sacred Heart, so like so many SHU stars in recent years, it became pretty obvious that he would be traded. That didn’t make his postseason meeting with coach Anthony Latina any easier.

“It was hard to do that. It’s a relationship,” Thomas said. “For me, it was a little harder to do.”

He went to compliance, where he had to watch this 15-minute video that explained what he was getting into, handed in his paperwork, and his name was put on.

Within minutes, Thomas received phone calls from Hofstra and Richmond. Calls from about 25 to 30 other schools followed in the days that followed. He tried to answer everyone.

“For me, the process worked pretty well,” Thomas said. “It was hectic at first, but as you wind it down it gets smoother and smoother as you go.”

Thomas, a former Amity High star, made his only visit to Hofstra. It was similar to the visits he’d made coming out of prep school, only “a bit more like a red carpet.” He signed up before the end of the visit.

He enjoyed the portal process and thinks it’s a good idea.

“Especially for single (transfers),” he said. “If you move once to another school, I think that should be your choice. If you transfer more than once, to me, you don’t hold out because you don’t get what you want.

Like Thomas, Newton only needed one visit. He knew that going into his April 8 visit to Storrs, UConn was his first choice, and his visit did not change his mind.

“I felt it was the right place for me,” he said. “I don’t really talk a lot, so being on the phone all day hearing the same thing, trying to figure out which (school) is lying, which one is telling the truth, it was pretty tiring.”

He had other visits to Georgia, Texas A&M and Gonzaga in case his visit didn’t go as well as he had hoped.

“But it went as I expected,” said Newton, who will likely be UConn’s starting point guard next season.

New chapter for a walk-on

So why does an extra like Garry enter the portal? Well, he kind of had to.

In fact, the Southington product didn’t really want to let it be known that he was leaving.

“I kind of wanted it to be a silent process,” he said. “But, I guess technically you have to have your release from your institution, so I had to enter the portal to be able to play this graduate year.”

Garry never received any communication from the staff regarding his return, but that was fine with him.

“I think it was time, honestly, to say goodbye,” he said. “I did my four years, I did what I had to do. I guess it’s time to start a new chapter.

He wants to go to a D-III school where he can get an MBA in a one-year program and hopefully play one more season. Due to the COVID-19 year, as well as an ACL injury that sidelined him for the entire 2020-21 season, Garry has two more years of eligibility. But he only plans to use one, after which he will look to embark on his “real future”, hopefully in physiotherapy.

He had a few free throws but never a field goal in his two seasons as an active player at UConn, but has no regrets.

“I wouldn’t trade it for anything,” he said. “It was the experience of a lifetime.”