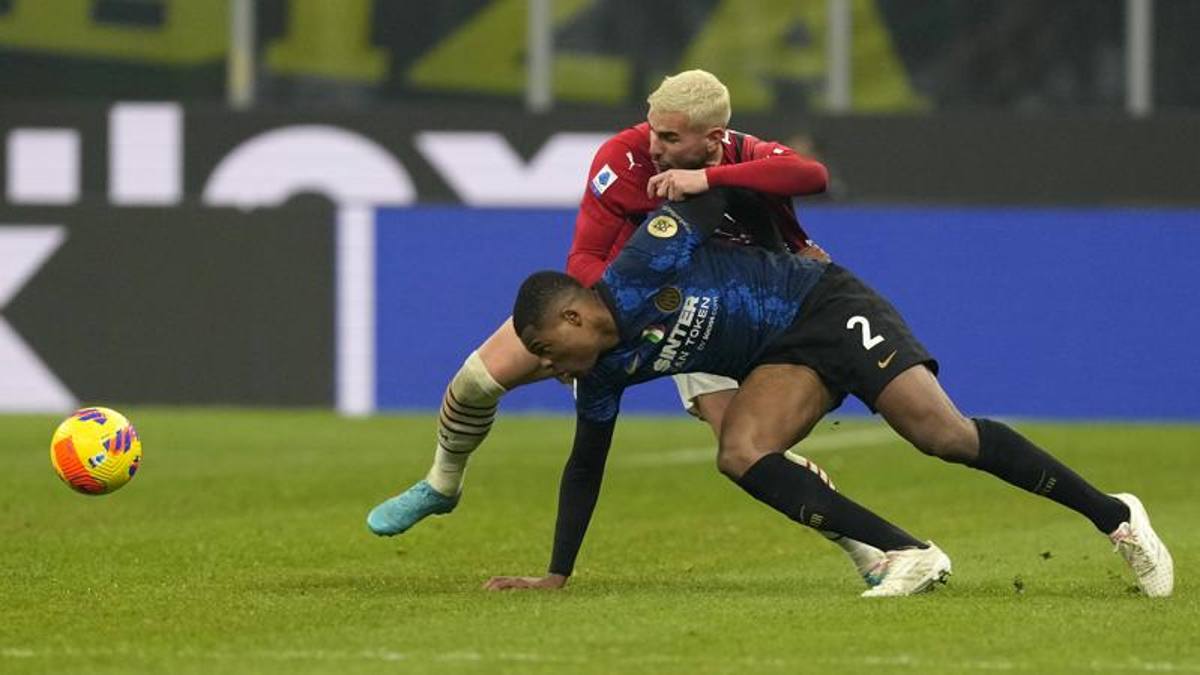 Restricting the Croatian’s freedom of action is key to Pioli, who can put Kessie on his tracks. Watch out for Giroud: in the league he was contained for a long time by the Nerazzurri central, but then …

This time there is no tomorrow, the fourth derby of the season is the return leg of a knockout match: Inter and Milan on Tuesday evening at San Siro will play for qualification for the final of the Italian Cup, starting from 0-0 in the first leg. Then the fight will continue in the Scudetto key, but no longer come face to face. The Rossoneri have a small advantage, because a draw with goals would qualify them: the national cup, in fact, will conform to the UEFA regulations only at the end of this edition. New chess game between Simone Inzaghi and Stefano Pioli, the two strategists. Let’s try to read the moves, area by area of ​​the pitch, identifying single duels and between departments.

De Vrij should return to the center of the department, despite D’Ambrosio (not only for the assist to Brozovic against Spezia) did very well as a right hand arm, as did Skriniar from central. However, Inzaghi will focus on the Dutchman not only for the desire to make up for it after the two championship acts that saw him as a negative protagonist between own goal in the first leg and Giroud nightmare in the return leg. Meanwhile, De Vrij, with Brozovic likely hunted by Kessie, serves as an adjunct director. The return of him also allows to bring back the physicality of Skriniar in the area of ​​Leao and Theo. Stefan will engage in a high altitude duel with Giroud, but he will not be able to distract himself for a second even in the phrasing of the Frenchman with the attacking midfielders. In the harakiri of February 5th, Olivier had hardly touched the ball for 75 ‘, but then … On the left there will be Bastoni, released in La Spezia but only for cramps. He should touch Messias to him.

Milan does not have many solutions to the “center forward” item: Ibrahimovic is out of action due to the usual overload in his left knee, Rebic has returned but he has not been seen in that role for months now, Lazetic has not yet played a minute in the first team, Leao is at its best when deployed on the left. Devil clinging to Olivier Giroud, therefore: match-winner in the championship with the brace that prevented the Nerazzurri’s escape, the Frenchman knows how to be lethal even at the first opportunity. And the Nerazzurri central players will not have to be satisfied with removing him from the game for a few tens of minutes: he must be monitored from the first to the last moment in which he is on the pitch. For the rest, the Rossoneri’s dangerousness index rises if the ball widens, given that the goals of the central attacking midfielders are few: Leao will try to attack the space between Dumfries and Skriniar, while on the right it could be up to Messias to oblige Perisic to deal more with the containment phase.

Unlike the first leg match, Barella, Brozovic and Calhanoglu will have to contend with Tonali (disqualified on 1 March) and Bennacer, with Kessie on the trocar to shield Brozo. The duel in a blue key between Barella and Tonali promises sparks, without forgetting that Nicolò will also have to double when Theo opens the gas. Calha and Bennacer will also be asked to provide ideas, without forgetting the contribution of outsiders. Marked in the first leg by Florenzi (now unavailable), Perisic will have to guarantee the usual offensive contribution keeping Calabria low (if he recovers) and keep an eye on Messias in the non-possession phase. We’ll talk about Dumfries versus Theo later on.

The doubt is always the same: where will Franck Kessie play? The most obvious move would be to put him back on Brozovic’s trail, in an attempt to limit the Croatian playmaker’s freedom of action. But in the league it didn’t work out great. If Pioli wanted to propose it again, the Ivorian would be deployed in the position of central attacking midfielder, in front of a median pair formed by Tonali and Bennacer: against Genoa, Kessie often made the pendulum between midfield and attack, giving support to both lines. If Franck were instead placed in the middle, it would probably be up to Diaz to place himself “under the striker”. Brahim’s speed could put the Nerazzurri “centraloni” in difficulty, but the Spaniard is not going through a great moment of form.

Lautaro (with the aggravating circumstance of the wrong penalty in November) and Dzeko – but also Correa and Sanchez – have remained dry in the three season derbies. This despite the fact that there are always different opponents. Pioli in fact lost first Kjaer, then Tomori and finally Romagnoli, right in the first leg match. In the meantime, the former Chelsea has returned and is doing very well with Kalulu too. The Bull, however, in big matches knows how to exalt himself, while Dzeko changes partner and therefore way of playing. If he has Correa at his side, in fact, he occupies the area more permanently, with Tucu as an offensive playmaker, while when Lautaro Edin is there he loves to lower himself to facilitate the insertion of the mezzali. Inzaghi’s fortunes will also depend on the incursions of Barella and Calha, as well as the fifths, but between the derby and the sprint of the championship the strikers’ goals remain essential.

Calabria, all right? Because if the stomach problem that prevented him from taking the field against Genoa is solved, Pioli will be able to count on a tried and tested defensive line. Otherwise it’s a problem, since Florenzi and Romagnoli are always out and even Gabbia has a muscle discomfort. Kalulu is a precious wildcard, he does well both the central and the right-back, but he cannot double … therefore, Davide’s recovery is fundamental, but so far he has not returned to training in the group. Calabria or not, the main pitfall for Milan will be dead balls: Tomori and Kalulu are fast but not very high, it will not be easy to contain giants like Dzeko, Skriniar, Bastoni or De Vrij at the same time.

Unless Inzaghi dusts off the Darmian balancer, Dumfries will still be on the right wing. And the duel between the Dutchman and Theo Hernandez could be worth the price of the ticket. While in the first leg of the Cup the two had lost themselves in the general dullness, the match of 5 February had been all sparks. Denzel had not suffered the physicality of his rival, on the contrary he had eaten in his head on the goal which was then canceled due to a millimeter offside by crosser Perisic. The Dutchman, thanks to the cage set up by Inzaghi as Theo also beats central tracks, had also kept up in the sprints, up to provoking the expulsion of Theo in the final. Milan will be unbalanced to the left as usual, where Leao also sprints. He will need the best Dumfries to hit the Cup final.

For Theo Hernandez it is a golden moment on a personal level: new father, still fresh from contract renewal, has bought a new home and is increasingly involved in Milanese life, as well as in Milan and the national team. Dumfries will be able to put him in difficulty with the gallops close to the sideline, but Theo will be able to counterattack by taking the middle lane as well, as he now often does. Milan’s best assistman, the last beneficiary of his services was Messias in Milan-Genoa.