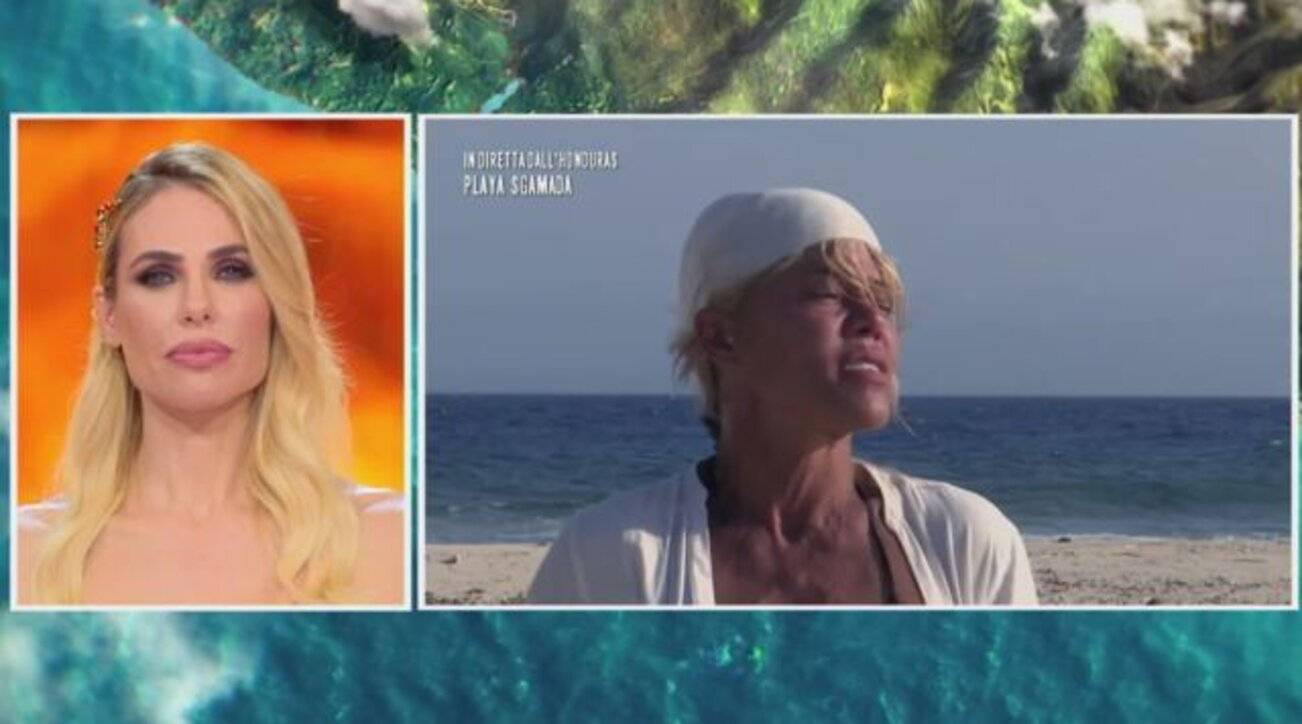 We start from a summary of the last few days, which have seen the castaways no longer in pairs but singles divided into two tribes. Tribes that frown upon each other and within which harmony does not always reign. In particular, the rivalry between Nicolas and Jeremias is increasingly accentuated. The first connection with the Palapa reserves a surprise: Alvin communicates that Jovana, due to a medical problem, fortunately of minor importance, was forced to leave the island and therefore the reality show.

THE PUNISHMENT FOR THE TIBURONS

– Ilary remembers that among the assigned rules there was that of not talking to each other between tribes except in specific moments marked by the sound of the bell. But someone has broken the rule in recent days. Estefania spoke at night and so it was decided that the Tiburons should put out the fire for 24 hours. The thing was not taken well by the companions, also because Estefania once discovered she laughed, which made Blind go on a rampage.

– There is talk of the last nominations and Gustavo is very disappointed, especially with Gwendolyn. She claims, in a colorful way, that he is touchy, he reacts harshly to deny this thing, very offended. Another character who had some relationship problems was Nicolas. With Nick, with whom he later clarified, while Blind and Jeremias accused him of pretending to have felt bad in the last episode after the rehearsal to go eat. They argue that in reality everyone more or less thought the same thing even though they now deny it.

– Ilary reads the decision of the public. The first castaway saved is Nick of the Country Cousins. Therefore, Nicolas and Gustavo remain in the ballot. Between the two, the castaway who must abandon the Palapa is Gustavo Rodriguez. Before leaving he gives his Judas kiss to Gwendolyn.

– You try the test that gives away 7 eggs, 7 potatoes and a kilo of flour. The test is that of the “Honduran Catapult”: Nicolas and Blind from a platform dive into the sea towards another platform where they can retrieve the sacks that are then thrown with a catapult from the companions to others who have to collect them with baskets. The Blue team collects 17 bags while the Yellows 16. The victory therefore goes to Cucaracha.

THE SEPARATES OF PLAYA SGAMADA

– There is a particular story in the exchanges between Playa Palapa and Playa Sgamada. That of Clemente and Laura, who miss each other very much and in the last episode they only touched each other. Ilary connects with the island and announces two news: both bad. A flash televoting will be opened for three of the four castaways to decide who will return to Italy, while Clemente will have to make a difficult choice. He can choose to take a caiucco to go and say hello to Laura but this in exchange for a spot on the televoting. If he gives up he will instead be immune. He, albeit with some hesitation, accepts. But not everything goes the right way: Floriana helps him to put the caiucco in the sea and pushes a little too much and so, thanks to the current, Clemente is unable to get on the boat.

TENSION IN THE PALAPA

– We return to the Palapa just in time to witness a quarrel between Edoardo, Jeremias and Blind. The last two accused Tavassi of not having the courage to accuse Nicolas of having pretended, he doesn’t like it and says that what he has to say to Nicolas he always said to his face. Meanwhile Clemente has managed to get on the boat and, struggling with the current, is paddling towards the playa.

CLASH IN THE FAMILY

– In the division between teams, the separation between Carmen and Alessandro took place. He has discovered the joys of freedom, she is on edge. Furthermore, Alessandro’s friendship with Licia is seen by Carmen as the smoke in her eyes. Now the two must face each other in a challenge that sees a plate of spaghetti with tomato up for grabs. The test consists in hanging from ropes that progressively lengthen leading them to a mud pool. Carmen shows more stamina than her son. And she decides to share the reward with her companions.

A HUG OF LOVE

– Clemente arrives at the beach with Laura already there waiting for him. The two hug and kiss, after which he explains her situation and she is not happy that he wanted to be nominated just to come and say hello.

– The two representatives of the two teams must undergo this test which sees an exchange at stake: whoever wins steals from the other team the element they consider stronger, giving in exchange what they consider weaker.

NICOLAS IN THE SNAKE’S LAIR

– Vaporidis is called into the Snake Lair for a no holds barred confrontation with Jeremias. A clip summarizes the many things that the two have said, face to face and from a distance. Jeremias, also primed by Ilary, says he “has nothing to say”, and does not want to confront. Nicolas points out that he is not angry with the Rodriguez, “it’s not a battle, we just didn’t find each other, it can happen between two people” he explains. However, he reiterates that in the game he finds a person who provokes him. Jeremias replies with a “he is a phenomenon, he won, you are all right”, evidently feeling surrounded. In the end the two talk to each other in some way but an agreement seems really impossible.

– Estefania and Guendalina are now facing each other ready to shoot. For Tavassi there is the unknown of the effect that the freshly eaten pasta will have … The two girls give bottom to every ounce of energy resisting until the threshold of 5 minutes when Gwendolyn, exhausted, has to let go. Thus the Tiburon team wins. So Estefania can now choose a member of the opposing team to take and choose Laura. In exchange for her he gives Edoardo to allow him to be reunited with his sister Guendalina.

– It’s time for a flash televoting to decide who among the castaways will have to permanently leave the reality show. The choice of the only immune is entrusted to fate, and this is Marco. Clemente, Floriana and Lory then challenge each other.

– Blind and Nick face each other in the apnea test respectively in two tanks that are progressively filled with water by the members of the opposing team. Blind quits first while Nick resists smoothly and takes the lead role.

FOR ROGER ONE EX TOO MUCH …

– In the studio there is Beatriz, an ex of Roger who was very upset to see the handsome Brazilian entertain a relationship with Estefania. Also because the two had heard very often before the Island and Roger had said he wanted to start over with her, even spending heavy words. And that’s why she doesn’t understand the boy’s behavior now. Zequila rejoices, seeing in this confirmed her idea that the story between Roger and Estefania is a fake …

– It’s time to find out the result of the televoting on Playa Sgamada. The first to be saved is Clemente and between Lory and Floriana the public chose to save the first. Floriana Seconds is the new eliminated from the program.

THE STORY BETWEEN ROGER AND ESTEPHANIA

– Last episode only one couple remained in the race, the one that apparently is also a real couple, the one between Roger and Estefania. Apparently because several companions suspect that the relationship is not so sincere but it could be the daughter of a strategy. Roger however is called into the nomination zone. Ilary asks him if he is in love. He says love is too strong a word but he really likes her. She then tells him about Beatriz and connects them. He says these things happen and she’s sorry. She invites him to forget her. Roger is in a lot of trouble and sweats profusely. When he returns to the Palapa next to Estefania Ilary asks her if he knew about her, she says that Roger had told of an ex about her but not that he wanted to go back with her.

– It starts with the clear nominations of the Tiburon team. Roger votes for Licia, Jeremias tries to vote for himself, since he can’t do it then he opts for Estefania and Roger. Blind votes Jeremias, as does Laura. Both of them say they do it for him because they see that he is not well. He confirms, says that he is not a person made for reality TV and does not understand why he came to the island. Alessandro also votes for it, as does Ilona. Vladimir bursts out from the studio stating that it is evident that it was Jeremias who asked to be voted and it is not fair. Licia stands out, voting for Blind.

– The winning team returns for the obvious nominations. We start with Carmen who names Blind. Vaporidis votes for Jeremias while Edoardo names Blind. Gwendolyn instead chooses Jeremias. Marco instead appoints Blind. The nominee of the group is therefore Jeremias. She will have to deal with Estefania and Roger voted for by the leader Nick.