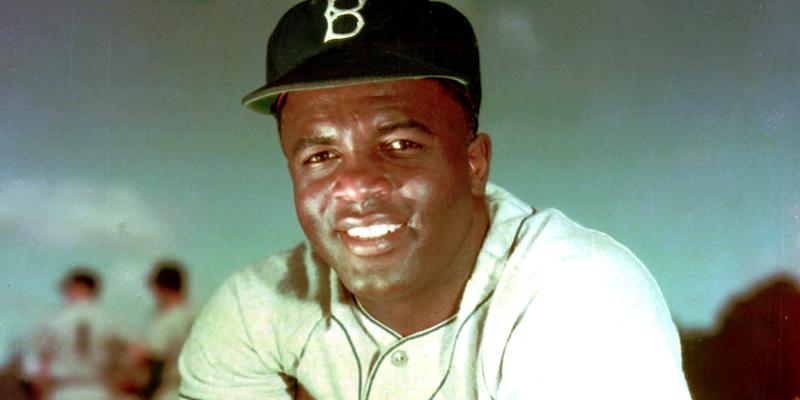 In North American sport, April 15 each year is Jackie Robinson’s day. On this date, in 1947, began the end of the segregation of African Americans in baseball, the American national sport, whose main league, the Major League, was until then reserved for white players.

That day Robinson, twenty-eight-year-old second baseman, grandson of slaves and son of Georgia farmers, took the field with number 42 at Brooklyn’s old Ebbets Field in the season opener between the Brooklyn Dodgers and the Boston Braves. He was the first African American to do so in the modern age of baseball and major league.

From then on the players first relegated in the African American Championships – the so-called Negro Leagues – began to find more and more space in the Major League, which became a real national championship and gradually put an end to the segregationist leagues. For Robinson, however, things continued to be complicated even after that game.

In those years the United States was still a deeply segregationist country and African Americans, even after the return from the Second World War, continued to be systematically excluded from the public sphere, if not persecuted with impunity in the most violent states.

In 1947, baseball was very popular. It was the era of great champions still present in American culture today, such as Joe DiMaggio, Stan Musial and Ted Williams. The Major League teams were sixteen and had about 400 players under contract, all white. There was room for everyone then, as long as they were white. This privilege, among other things, limited the competitiveness of the league, as so many players were quite confident of their place in the team and didn’t care too much about staying fit or improving.

In the leagues reserved for blacks, however, the level was constantly raised, driven by personal ambitions and the need for players to earn a living in a country that did not allow them so easily. Teams like the Kansas City Monarchs were increasingly known for the show they offered, albeit with limited means, little knowledge and a rather amateur style. In the 1940s Robinson started playing with the Monarchs, after a brilliant school career, between Pasadena and Los Angeles, interrupted by military service.

During the Second World War he was not sent to fight because in 1944 he ended up in court martial: he had refused to sit at the back of a military bus, as he had been ordered by the driver, because in the army there were no segregationist rules, at least officially . He was acquitted on trial and sent to train athletes at a military school in Kansas, where he then stayed to play with the Monarchs.

In those years, in Brooklyn, the extravagant general manager of the Dodgers, Branch Rickey, was thinking about how to strengthen the team to win the championship, which has never been possible there until then. He was aware of the many quality African American players, and at the same time he knew that their engagement was not prohibited by the Major League rules, but only by some sort of unwritten code that everyone respected.

Among the cards of the players examined by Rickey ended up that of Robinson, who had very high percentages as a hitter, had already played with whites – at the time of the University of California – and was of Methodist religion like him. In 1946 Robinson was contacted by the Dodgers while touring the country with the Monarchs and initially hired for a satellite team, the Montreal Royals. At their first meeting, Rickey told him, after provoking him: “I’m looking for a player with enough guts not to respond to provocations.”

Robinson had always been a determined type, never violent and willing to contravene segregationist rules. But as a baseball player he was mostly focused on baseball. When he talked about himself, he often said, “More than anything, I hate losing.” The Royals inevitably began abuses against him, both by teammates and by opponents and by the public, but also a series of great performances that over time began to attract crowds never seen before for those championships, composed mainly of African American spectators intrigued by his presence in a white league.

Rickey then called him to the Dodgers, where on April 11, 1947 he made his debut in a preparation match against the New York Yankees and then, four days later, in the league. The first months in the Major League were even more difficult than the previous ones, given that the abuses were many and came from all over. Over time, however, Robinson found some allies. One was the coach of the Dodgers, Leo Durocher, who followed the line dictated by Rickey and to stop the abuse within the team gave the famous speech: “I don’t care if the boy is yellow or black, or if he has the stripes like a zebra. Here I am in charge and he plays. And I also tell you that he can make us all rich. If any of you don’t need the money, I’ll make sure to exchange it for someone else. Just let me know. ‘

Another was a teammate, Pee Wee Reese, who is credited with another famous phrase, not trivial for the time: “You can hate a man for many reasons. But color is not one of them ». But when the Dodgers started winning consistently, things got better and the rest of the players got over it.

That year the team made it all the way to the World Series, the championship finals, which they lost to the New York Yankees. Robinson played 151 games, scored 125 points and was the player who stole the most bases in the entire championship. His performance won him the award for best newcomer of the year, an award that today bears his name.

In ten years of his career he was named best player of the season in 1949 and for six consecutive years he was included in the best team in the league. He played six World Series and won them in 1955: they were the first in history for the Dodgers, now one of the most successful teams in the league. The following year he retired but remained in the world of baseball and in the 1960s became the first black Major League TV commentator for the ABC network.

He died in 1972, aged just 53, of complications related to diabetes and heart problems. Few other American sportsmen have left such a vast legacy. He was celebrated posthumously with stamps and a commemorative silver dollar. His bust is in the Baseball Hall of Fame, and the “Jackie Robinson Rotunda”, the large entrance hall to the Mets stadium in New York, is dedicated to him. He was awarded both the Presidential Medal of Freedom and the Congressional Gold Medal, the two highest honors in the United States. Among his most quoted phrases about him, one of him said in the days of the Dodgers: “I don’t care whether you like it or not. All I ask is that you respect me as a human being. “

This year marks the 75th anniversary of his first official game with the Dodgers, and on Friday all Major League teams will play with the number 42 printed on their kits. In Los Angeles, Robinson’s son David and his wife Rachel – who will turn 100 in July – will attend the Dodgers game, a team that left Brooklyn ten years after Robinson’s debut to move to Los Angeles.