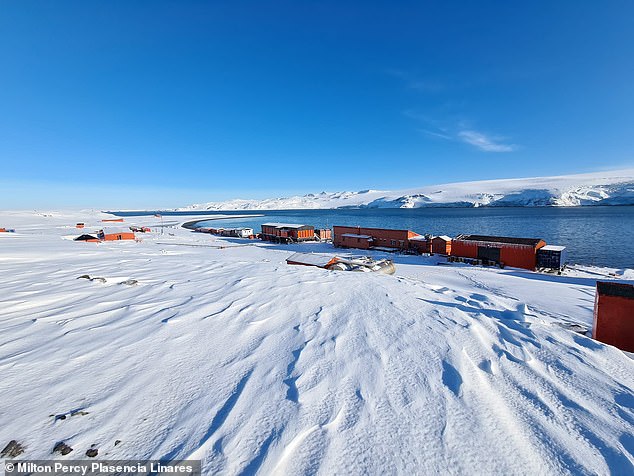 A ‘swarm’ of 85,000 earthquakes in Antarctica that lasted about six months in 2020 was triggered by magma from an undersea volcano, a new study has found.

The swarm occurred at Orca Seamount, a deep-sea volcano near Antarctica’s King George Island in Bransfield Strait that has been inactive for “a long time”.

Researchers used seismometers and remote sensing techniques to determine how long the swarm lasted and what caused it.

Swarm earthquakes mainly occur in volcanically active regions, so the movement of magma in the earth’s crust is therefore suspected to be the cause.

During the swarm, the ground on nearby King George Island shifted 4.3 inches (11cm) – suggesting a ‘finger’ of magma nearly reached the surface, scientists report in their new study.

Carlini Base on King George Island, home to the seismometer closest to the seismic region, and Bransfield Strait

Orca Seamount is located in the Bransfield Strait, an ocean channel between the Antarctic Peninsula and the South Shetland Islands, southwest of the southern tip of Argentina

What is an earthquake swarm?

Earthquake swarms occur when many earthquakes occur over several weeks or months, with no clear sequence.

Traditional earthquakes have a main event, followed by a series of aftershocks.

Seismic activity could be a sign of an impending supervolcano eruption, although this is difficult to predict.

Earthquake swarms are common in Yellowstone in the western United States and average about 50% of the total activity in the Yellowstone region.

The so-called “swarm earthquake” has reached proportions never seen before for this region, experts say.

“In the past, seismicity in this region was moderate,” said the study’s lead author, Dr. Simone Cesca of the German Research Center for Geosciences (GFZ) in Potsdam.

“However, in August 2020, an intense earthquake swarm began there, with more than 85,000 earthquakes in six months.

“This represents the largest seismic unrest ever recorded there.”

It is well known that earthquakes occur in subduction zones, when two tectonic plates sliding in opposite directions collide and then suddenly slip.

Severe earthquakes normally occur above fault lines where tectonic plates meet, although minor tremors can occur in the middle of these plates.

Meanwhile, earthquake swarms occur when many earthquakes occur over several weeks or months, with no clear sequence.

By comparison, traditional earthquakes feature a main event, followed by a series of aftershocks.

Most earthquakes are caused by plate interaction; however, some are related to volcanoes and the movement of magma.

Most earthquakes directly beneath a volcano are caused by the movement of magma, which exerts pressure on the rocks until it cracks the rock. Then the magma squirts into the crack and starts building pressure again.

Each time the rock cracks, it makes a small earthquake. These earthquakes are usually too small to feel but can be detected and recorded by sensitive instruments called seismometers.

Orca Seamount is a large submarine shield volcano with a height of about 900 meters (nearly 3,000 feet) above the seafloor and a base diameter of about 6.8 miles (11 km) . It is located in the Bransfield Strait, an ocean channel between the Antarctic Peninsula and the South Shetland Islands, southwest of the southern tip of Argentina.

The rumblings of the 2020 swarm were originally detected by scientists at research stations on King George Island.

What is Seamount Orca?

Orca Seamount is a large submarine shield volcano with a height of about 900 meters (nearly 3,000 feet) above the seafloor and a base diameter of about 6.8 miles (11 km) .

It is located in the Bransfield Strait, an ocean channel between the Antarctic Peninsula and the South Shetland Islands, southwest of the southern tip of Argentina.

Researchers say a swarm of earthquakes occurred at Orca Seamount in 2020, caused by the transfer of magma beneath the seafloor.

For this reason, it was thought that more could be revealed about the nature of the rumbles and their duration with broader analysis.

So the team also analyzed data from more distant seismic stations and data from InSAR satellites, which use radar interferometry to measure ground motion.

They used a number of geophysical methods to model the events, to ensure they were interpreting the data correctly.

The researchers backdated the start of the unrest to August 10, 2020 and managed to expand the original global seismic catalog, containing just 128 earthquakes, to over 85,000 events.

The swarm peaked with two large earthquakes on October 2, 2020 (measuring 5.9 on the moment magnitude scale, or Mw) and November 6 (Mw 6.0) 2020 before declining sharply in mid -November after about three months of sustained activity.

The researchers say the swarm was caused by a rapid transfer of magma from the Earth’s mantle near the crust-mantle boundary to near the surface.

The crust-mantle boundary is the point where the earth’s crust, the outermost shell, meets the mantle (a layer of silicate rock)

According to the scientists, the swarm marks “the largest magmatic unrest ever geophysically monitored in Antarctica”.

Magma intrusion (the migration of a larger volume or “finger” of magma) has been identified as the primary cause of the swarm earthquake, as seismic processes alone cannot explain the deformation of the earth’s surface observed on King George Island.

The study shows that such events can be studied and described in detail even in such remote and therefore poorly instrumented areas.

“Our study represents a successful new investigation of seismo-volcanic unrest in a remote location on Earth, where the combined application of seismology, geodesy and remote sensing techniques are used to understand seismic processes and magma transport in poorly instrumented areas,” said Dr Cesca. mentioned.

“This is one of the rare cases where we can use geophysical tools to observe the intrusion of magma from the upper mantle or the crust-mantle boundary into the shallow crust – a rapid transfer of magma from the mantle to almost the surface that only takes a few days.’

The study, which involved researchers from Germany, Italy, Poland and the United States, was published in the journal Earth and Environment Communications.

EARTHQUAKES ARE CAUSED WHEN TWO TECTONIC PLATES SLIDE IN OPPOSITE DIRECTIONS

Catastrophic earthquakes occur when two tectonic plates sliding in opposite directions collide and then suddenly slide.

Tectonic plates are made up of the earth’s crust and the upper part of the mantle.

Below is the asthenosphere: the hot, viscous conveyor belt of rock on which the tectonic plates roll.

They do not all move in the same direction and often clash. This creates enormous pressure between the two plates.

Eventually, this pressure causes one plate to shake under or over the other.

This releases a huge amount of energy, creating tremors and destroying any nearby property or infrastructure.

Strong earthquakes normally occur above fault lines where tectonic plates meet, but minor tremors – which always register on the Richter sell – can occur in the middle of these plates.

These are then referred to as intraplate earthquakes.

These remain largely misunderstood, but are thought to occur along minor faults on the plate itself or when old faults or fissures well below the surface reactivate.

These areas are relatively weak compared to the surrounding plate and can easily slip and cause an earthquake.

Earthquakes are detected by tracking the size, or magnitude, and intensity of the shock waves they produce, called seismic waves.

The magnitude of an earthquake differs from its intensity.

The magnitude of an earthquake refers to the measurement of the energy released at the origin of the earthquake.

Earthquakes originate below the earth’s surface in a region called the hypocenter.

During an earthquake, part of a seismograph stays still and part moves with the surface of the earth.

The earthquake is then measured by the difference in the positions of the fixed and mobile parts of the seismograph.