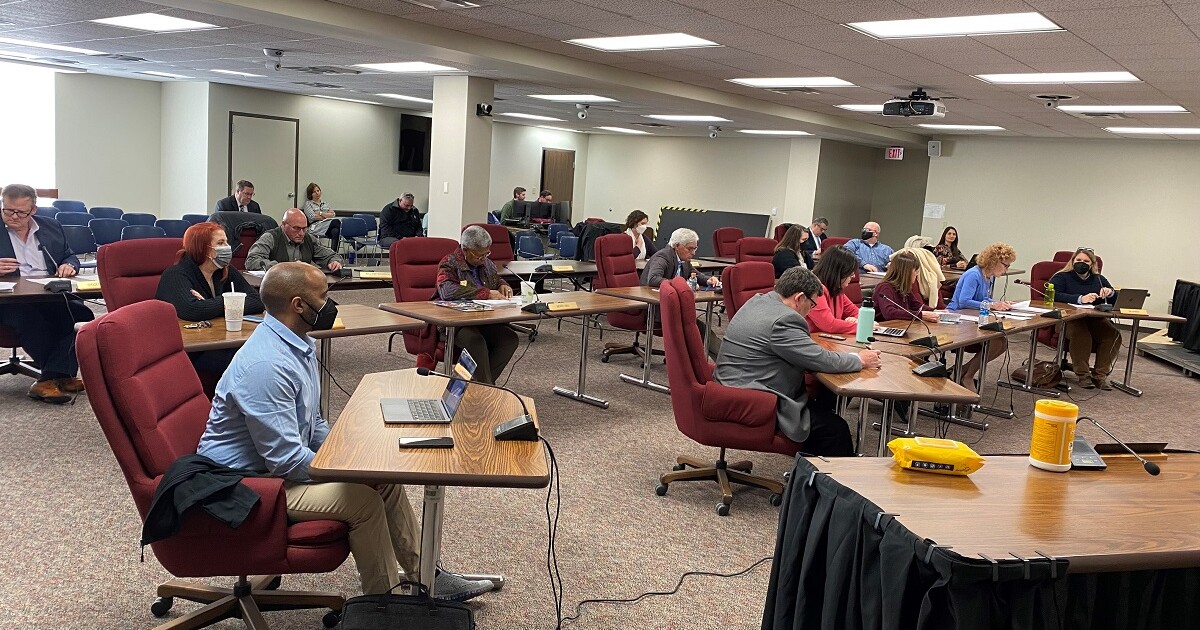 The McLean County Board delayed a vote on its updated mental health action plan on Thursday over concerns that the public should have the first opportunity to review the final draft.

The county’s Behavioral Health Coordinating Council (BHCC) has been working on an update to the county’s first mental health action plan that was adopted in 2015. County administrator Cassy Taylor said the updated version, which would be in effect for three years, focuses on county government’s role in improving mental health, helping youth who have behavioral health problems, housing, crisis intervention and medication management.

County board member Elizabeth Johnston asked the board to postpone the vote until the May 12 meeting so the public has a chance to review the document first.

“I saw lots of instances where service providers were asked and given input, not as much where I would have wanted to see participation from community members giving input for what their needs are on the ground,” Johnston said.

Johnston said she has had work conflicts that kept her from attending the BHCC meetings and the county has not posted meeting minutes or audio recordings for the public to review.

Board member Susan Schafer, who helped lead the plan’s revision with about 25 stakeholders from government, health care, education and social services, said it would be a bad look for the county to delay implementing a document the committee spent years working to develop and improve .

“Passing this tonight and tabling it is pretty much dismissing those CEOs and those executive directors of those organizations that will be implementing and making the changes because they are the ones that are going to do the work,” said Schafer.

Board member Val Laymon said the board had little time to review the draft, since members received it Tuesday afternoon. She said that left members without enough time “to digest it, or perhaps come to the table with relevant and intelligent questions on it.”

County board chair John McIntyre, who also heads the BHCC, said the board will have the final say when it votes on mental health spending, suggesting a vote on the action plan shouldn’t even be necessary since it is meant to serve as a guide rather than a funding blueprint.

“Or else we’ll have to do away with the BHCC and say we want to have a mental health committee or a board to spend money for mental health action made up of county board members,” McIntyre said.

A draft of the plan can be viewed here.

In another matter, the board approved spending $ 750,000 over two years to fund a Bridge Academy through the Regional Office of Education (ROE) for McLean, Livingston, Logan and DeWitt counties.

The academy will provide classrooms for up to 40 students who are identified as at-risk, or who have a history of hospitalization for behavioral health issues. According to the contract, ROE will provide those students with counseling and trauma-informed support.

School administrators have said the coronavirus pandemic has led to more mental health concerns among students.

County administrator Cassy Taylor said the ROE has not yet announced a location for the academy.

The contract takes effect immediately and will run through December 2023. The funding will come from a sales tax Bloomington and Normal collect to address mental health needs in the county.

The board also agreed to spend about $ 328,000 to buy more than 50 police body cameras for McLean County Sheriff’s deputies.

Sheriff Jon Sandage said the contact with Axon Enterprise Inc. will equip each officer with a body camera. Police agencies are required to use body cameras as part of a criminal justice reform measure Gov. JB Pritzker signed into law last year.

The county also agreed to a four-year labor contract with dispatchers at MetCom, McLean County’s emergency communication service. In a contract that starts retroactively on Jan. 1, 2021, members of Laborer’s International Union North America Local 362 will get 6% raises in the first year, 3.5% the second year and 3% in the final two years of the contract. Dispatchers also will get a $ 1,000 bonus.

The board named Pontiac attorney Adam Casson a special public defender to help the county’s shorthanded public defender’s office for the next six months. McLean County Public Defender Ron Lewis requested the contract, noting the office is short two attorneys to handle traffic and drunk driving cases and has had difficulty finding entry-level candidates. Casson will be paid $ 10,000 for the six-month contract.

The board approved a $ 48,500 agreement with Evergreen Solutions of Tallahassee, Fla. To conduct a salary study of county employees. The finance committee requested the study last year after learning of concerns that county government was struggling to remain and recruit qualified staff in several departments.

McLean County has approved the first phase of an overhaul for its electronic justice system (EJS). The county approved a contract with Los Angeles-based Journal Technologies to implement a new central management system for court services, including prosecutors, public defenders and probation.

“Unfortunately, the vendor no longer has anyone on staff who programmed that financial system, so anything new that we need to do for financial reporting we’re actually pulling out that data out raw instead of a finely polished report,” Nelson said.

The new system is scheduled to go live by January 2024.

The county plans to seek bids to replace its Records Management System (RMS) for police reports and its Jail Management System (JMS) this summer. Funding for the projects will come from several sources, including the federal American Rescue Plan Act (APRA) and the sales tax that Bloomington and McLean County collect for mental health programs.