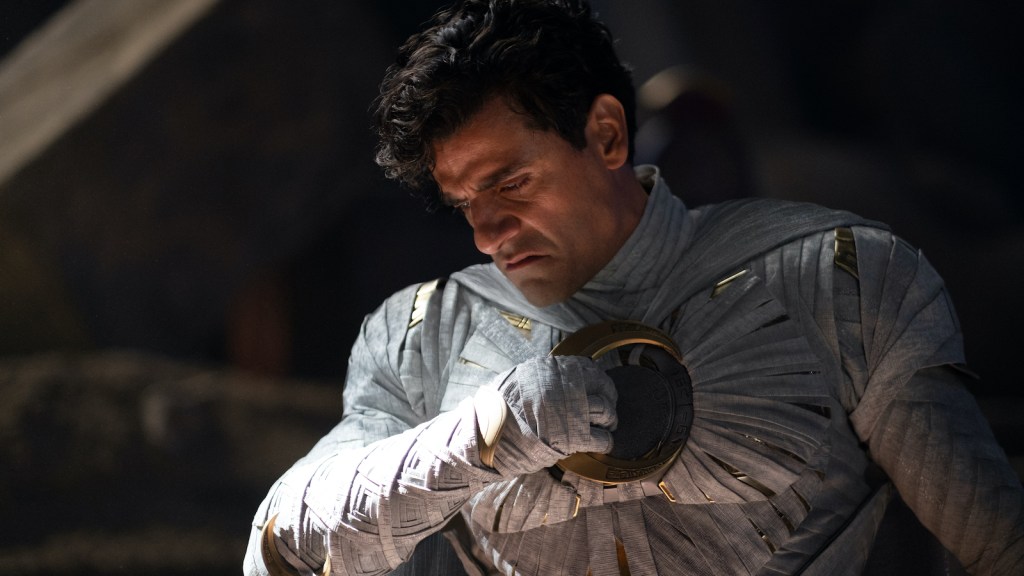 All along marvel studios‘ ‘Moon Knight’, it’s clear the titular superhero at its center, played by Oscar Isaac, was struggling with a serious mental health issue. Namely, his dissociative identity disorder had split his psyche into two: Mark Spector, a badass American mercenary, and Steven Grant, a mild-mannered British gift shop employee.

Savvy “Moon Knight” viewers, however, picked up clues about Mark that fans of the Marvel comic book series already know: Mark’s mind harbors a third identify. And in the final scene of the (probably) last episode of “Moon Knight”, the audience finally got to meet him: Jake Lockley. In the comics, Jake is a street taxi driver, but in the series the audience comes to suspect – after Mark or Steven pass out with their lives in mortal danger – that Jake is capable of lightning acts of crushing violence. It’s not until the post-credits scene, however, that Jake finally shows up. He extracts Ethan Hawke’s Arthur Harrow from a mental hospital, throws him into a stretch limo, and kills him in the name of the Egyptian god Khonshu. End of series !

Where is it? wonder recently referenced the episode as the “season finale” of “Moon Knight”, not the series finale. Beyond Jake’s introduction, we also see Mark’s wife, Layla (May Calamawy), become a superhero in her own right, as the avatar of the Egyptian goddess Taweret. According to wonderLayla’s superhero name is Scarlet Scarab, taken from a male superhero introduced in 1977 (and killed off in 1982), and she is officially the first Egyptian superhero to occupy the Marvel Cinematic Universe.

All of this suggests a wide open future for Mark/Steven/Jake and Layla – something from the Egyptian filmmaker Mohammad Diab, who directed the first, third, fifth and sixth episodes of “Moon Knight” – certainly hopes to help shake things up. He spoke with Variety about bringing Jake to life, why it was so important for Layla to become a superhero, and why he’s proud that “Moon Knight” has no crossover with the rest of the MCU.

Did you know you wanted to end the series by introducing Jake Lockley?

Everything you see on the show is trial and error, a process we’ve all been through. There were so many endings – like, not completely different endings, but just, let’s stop here, let’s stop here, let’s stop here. I think maybe the third or fourth draft, everyone knew that would be the very last scene. But how much of Jake we see is something we’ve discussed for longer. I think we made the best decision. Everyone wants to know more about Jake. But if we had introduced him on the show without really giving him time to develop and be a character in his own right like Mark and Steven, it wouldn’t have been fair to him. I think now we have opened the door. If there is an expansion one day – which I hope there is, which I don’t know if there is – I could be a part of it and Jake could have his time to shine.

Well, Oscar Isaac was up front when he approached “Moon Knight” like a story contained and that he feared being tied to the MCU beyond, given his experience with other franchises. But Jake’s scene certainly suggests there’s more story to tell.

If you ask me, I’d tell you “Moon Knight” is here to stay. He’s an interesting character. If you’re Marvel, I think the smart business decision is to keep it. The only thing is that Marvel isn’t traditional. If you succeed, that doesn’t mean you’re going to have a season 2. By the way, I’m kept in the dark. I have no idea. I’m just thinking as a businessman right now. But I think they will stay. It might be a movie. Maybe it will be a trip like what happened with “WandaVision”. I would like that one day, if there is an extension, I will be part of it. We finished in a way that feels like a start. You see Mark and Steven becoming a new dynamic, both in one body. We see Jacques. You see the Scarlet Scarab, who might or might not be a superhero. Very interesting things.

The show plays with the idea that it’s all in Mark’s head. Do you feel like the show ends with a definitive answer to that question?

My answer is that it’s a show that needs to be watched once, twice, and thrice. There are so many clues. What is real and what is not is unclear. For example, we saw his brother drawing a fish. So if this is real, then how come Steven also has a fish with a fin? What inspired what? It’s a loop. And I think a lot of clues are like that.

Did you discuss the idea that the show definitely exists in Mark’s head – to really feel like a superhero story from the mind?

I always wanted it to be open. It’s funny: I always said to Kevin Feige, I want to have an ending when we find out that the whole MCU is in his head. So it’s an open question.

You also introduce Layla as Scarlet Scarab in the finale. How did it happen?

First, I want to thank the writers who created the idea of ​​Layla being an Egyptian. When Sara [Goher], my wife and producer of the series, and I came, we helped develop the character as Egyptians. When May arrived, she became Layla’s greatest ally. The most important thing for us was not just the idea of ​​a superhero, but the idea of ​​making her the complete opposite of all the tropes about the Arab woman as submissive or weak. I have made three films: the women in my films are completely fierce and strong — like my mother, my sister, my wife and my daughter.

As superheroes, we knew this was going to be historic. My daughter, when she was five, she wanted to straighten her hair. I had to take her to Disneyland and tell Princess Elsa and Anna, “Please tell her her hair is beautiful.” She’s never seen anything on TV that looks like her. So today, seeing Layla, you don’t know what it means to people who look like us. Its very important. “Moon Knight” becomes a national pride in Egypt. People treat him like the Egyptian “black panther”. They love that behind the camera there are Egyptians; in front of the camera, there are Egyptians. There is Egyptian music that the world enjoys. They believe in themselves. They believe they can do anything now. I’m so proud of it.

Did you always know that Layla was going to be the Scarlet Beetle, or did you look at other possible characters of Egyptian descent that she could be?

Honestly, I couldn’t find the name. I didn’t connect it to the Scarlet Scarab. Sometimes Marvel chooses a name and then gives it to the character that is developed [for the show]. For example, Arthur Harrow is absolutely different from the Arthur Harrow that is in the comics. We just use the property. So we create Layla without all that, and then we give her a name. I keep saying maybe she’s not the Scarlet Scarab. Because at the moment she hasn’t gotten her powers from the beetle. But maybe if the story continues, it will happen – or not. So the name for me is not important. What she represents is what is most important. I can’t wait to find out one day, will she still be a temporary avatar? Will she accept it? What will happen with her? I do not know.

It sounds like you do, but I’m going to ask you directly: Would you like to work with Marvel Studios again?

I would pay to do that. Definitively. I wanted to be a director because I have stories that I want to share with as many people as possible. I have always made intimate films. My dream is to do what Denis Villeneuve does – make your little intimate films on a larger scale, so that you connect with more people. Thank God I had the chance to do it on this show. I always have the impression that it has the DNA of my films, the small intimate films. I had allies like Oscar, Ethan, May and Marvel, who supported me to do it.

There are only a few very flashy MCU references on “Moon Knight,” but there are no crossovers at all — until the post-credits scene, where crossovers almost always happen. What do you think this means about the show’s place in the MCU?

We had the freedom to place it at any time. I want to tell you about the very first scene, there was a crossover, and the very last scene, there was a crossover. But as the story developed and we kept changing the scripts, we were like, “We don’t need this.” All of us. It was a collective decision. And then I kept thinking: it’s a rule. There must be a scene at the end that connects us to the MCU. But I think they decided, “You know what, the surprise is there’s is not, and what will make this show unique is that it doesn’t need anything else. The best compliment we get on the show is when people tell us, “This doesn’t look like a Marvel show. It feels like a standalone show that feels more dramatic, darker, more grounded. I feel like we’ve managed to bring Marvel more into our corner. So, so proud and happy.

This interview has been edited and condensed.