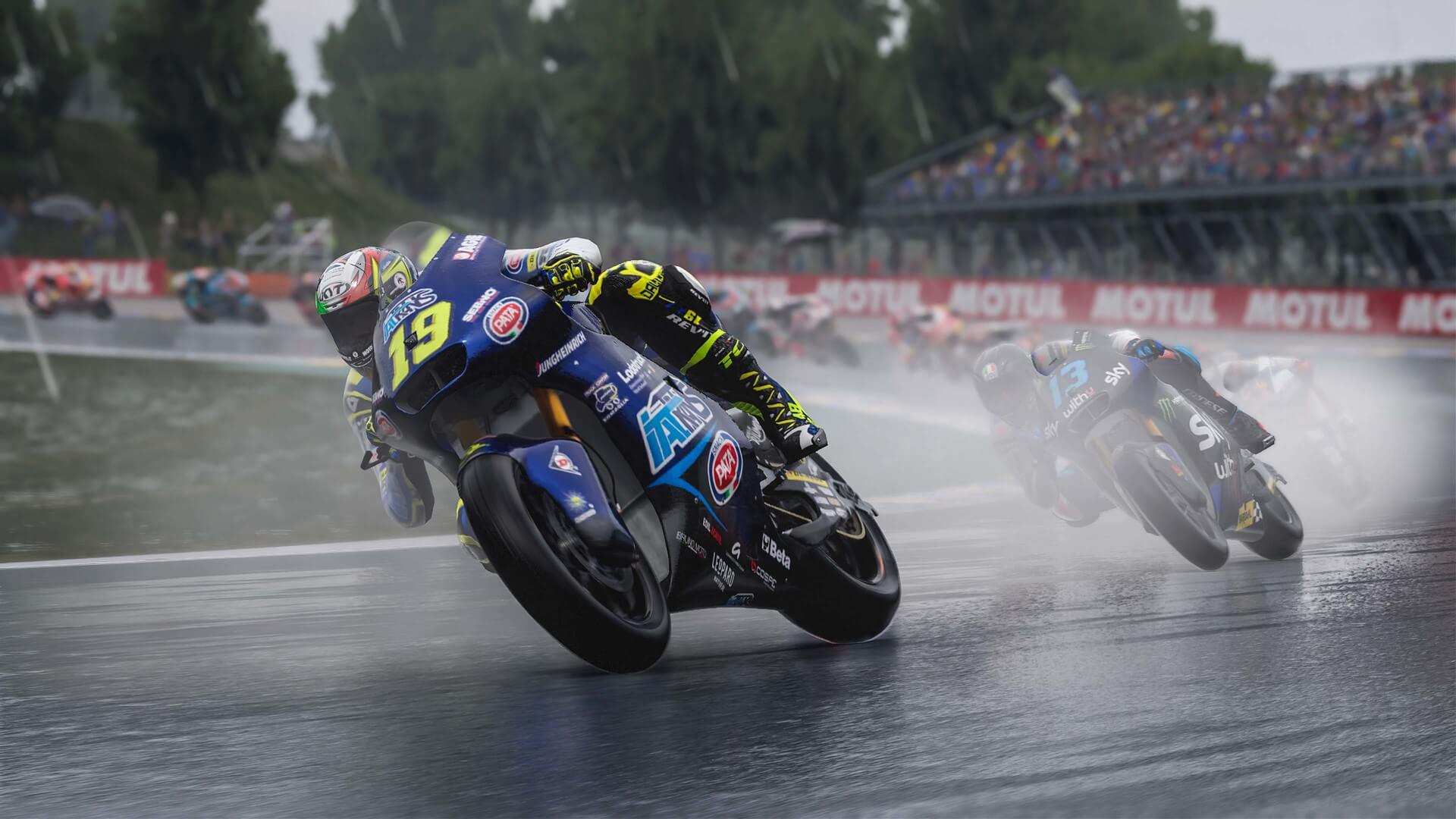 MotoGP 22 is primarily a step forward for the Italian Milestone franchise, but also a heartfelt tribute to the pride of Tavullia and to a world accustomed to living life one after another.

Strengthened by a more than tested frame, MotoGP 22 introduces itself to the fans of the World Championship with the 2022 liveries polished, with a gameplay more devoted to realism and with a novelty that will bring out the Guido Meda hidden in each of us.

ALL STANDING ON THE SOFA!

Let’s start right from NINE – Season 2009, the tribute to the year in which the Doctor won his 9th World Championship. Created by Milestone and Mark Neale Production in the form of docu-filmthe mode focused on Valentino Rossi tells a story that has become the legend of this sport and, while doing so, allows you to relive in first person each of the 17 stages of one of the most exciting seasons ever.


Alternating over 50 minutes of real footage to game sessions where the challenge changes depending on who you play (people like Rossi, Stoner, Lorenzo or Pedrosa) and how things actually went thirteen years ago, NINE – Season 2009 is an extra content that he knows how to be appreciated for his engaging way of narrating an unforgettable season. Those who have not enjoyed that world championship standing on the sofa will probably enjoy a way in which memories come to life less viscerally, however the possibility of indulging in some different races for objectives and context could be enough to make it attractive to anyone, without forgetting that completing the different challenges allows you to unlock additional customizations.

MOTOGP 22 HAS AN ARROW FOR EVERY WHIM

Those who really can’t stand Rossi need not worry, MotoGP 22 has many other arrows in its bow obviously all updated for the 2022 season. I am referring to the fast modes (Grand Prix, Championship, Time Trial with online rankings of the best times and the new Shared Screen to battle locally), to public / private multiplayer lobbies (cross-play is there but only between consoles belonging to the same family) which I could not prove due to the shortage of players on the servers, to the renewed Training section now expanded by the new MotoGP Academy in which to discover the secrets of all the official tracks (a gem for two-wheel fetishists useful for improving their performance) and, last but not least, the Managerial Career mode.

Between electronics, consumption and so on, every bike must be constantly kept under control.

True fulcrum of MotoGP 22 for what concerns the single player, the Career offers the opportunity to start from the preferred class (Moto3, Moto 2 or MotoGP) with an official team or a newborn to attempt the climb to the title of world champion. The management of the team falls entirely on the shoulders of the player as the road to success it passes through an undergrowth of activity such as the mechanical development of the racing car divided into four branches or the foundation of a Junior Team. We are not at the levels of a pure management system for complexity, mind you, but if you are looking for something deeper it is certainly the right way. The circle of contents closes with a quick mention of the categories 500cm 2-stroke, 800cm 4-stroke and 990cm 4-stroke in which to challenge over 70 champions of the past and graphic editors with which to unleash your creativity by customizing the rider, helmet, number, team and various stickers.

The news continues with a graphic restyling that does not only concern the surfaces of the more than 20 official circuits but also the pits, the faces of the characters, the 3D models and the animations. The aesthetic update is noticeable compared to last year, for example the faces are less out of tune, however the impression is that to witness the hoped-for technical qualitative leap there is still work to be done in this respect. Regarding the gameplay, however, the watchword is realism, as demonstrated by the innovations such as the control on the compression of the suspension (the RHD) or the deformation of the tires according to the driving style. These mechanical minutiae for connoisseurs add to a plethora of pre-existing dynamics such as fuel management, tire wear and brake temperature, a jumble of details to put your hand to help make the experience even more simulation. if the driving aids are reset. Clearly nothing prevents you from lightening the gameplay to transform MotoGP 22 into an arcade, however, the greatest satisfaction is obtained when, by dint of tests, falls and surgical calibrations, you get to tame a motorcycle without forcing the driving system or external help. Speaking of taming the bike, keep an eye on ANNA and your opponents: despite the progress of the AI, already at a medium level it is not uncommon to end up on gravel following an excessively vigorous entry by the other riders.

The level of detail of the bikes and riders is commendable.

MotoGP 22 knows how to repay the efforts made in cultivating the relationship with its artificial foal, the pleasure inherent in the constant improvement of times and performance is priceless because it is the reward at the end of a fun and satisfying path but not at all easy to follow. The amount of work behind a single podium can reach sensational levels, however, being a rider means just that and MotoGP 22 manages to offer us a valid videogame representation. In terms of physics, it’s safe to play, Milestone has reached a remarkable standard and continues to support it. The feeling is that bikes are more sensitive to touch (be delicate with the brake, the front closes immediately) and to the stresses but also more reactive to perceive the changes, the weight is well distributed and the driver’s behavior credible despite some less convincing contacts than others. Perhaps all this may not be enough for those who have allowed themselves to be seduced last year, net of the 2022 improvements, the game frame is roughly the same and those who wanted a more net update could be disappointed. A similar speech could also be understandable, on the other hand is the dilemma of any annual productionbut let me say that, despite the absence of competitors, Milestone has not rested on its laurels and MotoGP 22 is irrefutable proof.

In short: By adding realism-enhancing minutiae and an interesting mode like NINE – Season 2009 to a solid and reliable frame, MotoGP 22 takes an evolutionary step in the right direction. The graphic restyling of some aesthetic elements was needed but it is still not enough and, more generally, the improvement compared to the previous chapter appears less profound than expected, yet, despite this, the many positive sides, the exaltation that it gives in copious doses and the various innovations are enough to make me think that those who are crazy about the world championship will also be crazy about the MotoGP 22.

Test platform: PlayStation 5
How it is, How it turns: On PlayStation 5 the framerate is granite, you can’t fiddle with the graphics settings but you don’t feel the need because when you run the show is guaranteed. The work on the faces, on the animations and on the 3D models is noticeable, but there is also a certain qualitative discrepancy between the moments on the track and the others. Good support for DualSense between haptic feedback and adaptive triggers with the resistors doing their duty.