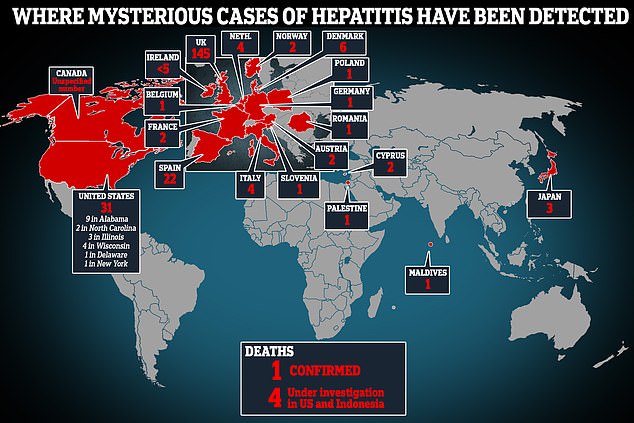 This brings the total number of countries with cases to 20. Worldwide, 228 children have been diagnosed with an unusual form of liver disease and another 50 suspected cases are being investigated.

One death has been confirmed but four others are suspected and 18 children required liver transplants.

Experts say the current tally could be the ‘tip of the iceberg’, with many countries only now stepping up surveillance for this unusual complication.

So far, most cases have been detected in Europe, but there are others in the Americas, the Western Pacific and Southeast Asia.

Scientists are puzzled by the wave of cases because none of the affected children tested positive for the normal viruses that cause hepatitis.

Adenoviruses – which normally cause colds and stomach bugs – are thought to be the culprit, although they rarely cause inflammation of the liver.

There are fears the lockdowns have weakened children’s immunity to normally mild viruses and investigations are also looking into whether a mutated adenovirus or Covid are involved.

But British scientists have admitted it could be at least three months before health chiefs know exactly what is behind the surge in cases.

The World Health Organization has been told that at least 228 children suffered from liver inflammation earlier this month, while 50 others are being investigated.

Some cases resolve on their own with no lingering problems, but a fraction can be fatal, requiring patients to need liver transplants to survive.

Why are experts concerned?

Hepatitis is generally rare in children, but experts have already spotted more cases in the current outbreak than they would normally expect in a year.

The cases are of “unknown origin” and are also serious, according to the World Health Organization. It has caused up to two deaths and 18 liver transplants.

What is the scope of the cases?

Inflammatory liver disease has been identified in more than 200 children aged one month to 16 years.

*cases in Canada and Illinois, Wisconsin and New York have yet to be confirmed

What are the best theories?

Experts say the cases may be linked to adenovirus, commonly associated with the common cold, but more research is ongoing.

This means that even the “normal” adenovirus could be the cause of the serious consequences, because children do not react to it as they did in the past.

Other scientists said it may have been the adenovirus that had acquired “unusual mutations”.

UKHSA officials included “a new variant of SARS-CoV-2” in their working hypotheses.

Covid has caused inflammation of the liver in very rare cases during the pandemic, although these have been in all ages rather than isolated in children.

The UKHSA noted that environmental triggers are still being researched as possible causes of illnesses.

These could include pollution or exposure to particular drugs or toxins.

WHO spokesman Tarik Jasarevic told reporters in Geneva today: “As of 1 May, at least 228 probable cases have been reported to WHO by 20 countries, and more than 50 additional cases are under investigation.”

Most cases have been detected in the UK (145) and the US (20), which have some of the strongest surveillance systems.

He previously announced that cases of hepatitis “of unknown origin” had been confirmed in Ireland, Spain, France, Germany, Belgium, Italy and the Netherlands, as well as in Israel, Denmark , Norway and Romania.

In its first update on the hepatitis outbreak since April 23, the WHO said cases have spread to eight other countries.

The agency did not reveal which countries had reported the additional cases, but other health bodies revealed that Austria, Germany, Poland, Japan and Canada had detected cases, while Singapore investigating a possible case in a 10 month old baby.

And Indonesia said yesterday that three children had died of suspected hepatitis of unknown cause.

The 145 children affected in Britain, who were mostly aged five and under, first suffered from diarrhea and nausea, followed by jaundice – yellowing of the skin and the whites of the eyes.

The WHO confirmed one death, although it did not reveal the location. One death in the United States is being investigated, along with the three in Indonesia.

UK health chiefs told MailOnline today that no deaths from hepatitis have been recorded in Britain.

The country’s health chiefs suspect the cases of hepatitis, but they are carrying out tests to determine if the usual hepatitis A to E viruses were behind them, or if their origin is unknown.

The WHO was first notified of the cases by health chiefs in Scotland on April 5, after detecting 10 cases in children under 10, the oldest of which was in January.

It was more than the average of seven to eight cases of non-A to E hepatitis that Scotland usually sees in a year.

Dr Meera Chand, director of clinical and emerging infections at UKHSA, said parents may be worried, but the chance of their child developing hepatitis is “extremely low”.

“However, we continue to remind parents to be alert for signs of hepatitis – especially jaundice, which is easier to spot as a yellow tint in the whites of the eyes – and to contact your doctor if you are concerned. “, she said.

“As always, children with symptoms such as vomiting and diarrhea should stay home and only return to school or nursery 48 hours after symptoms resolve.”

Hepatitis is generally rare in children, but experts have already spotted more cases in the UK since January than they would normally expect in a year.

Scientists have previously suggested the cases could be just the ‘tip of the iceberg’, with more likely to be there than has been spotted so far.

Professor Alastair Sutcliffe, a leading pediatrician at University College London, told MailOnline that health chiefs may not know the cause until the end of the summer.

He said: “With modern methods, computing, advanced computing, real-time PCR and whole-genome screening, I think finding the cause with reasonable reliability will take three months.”

Professor Sutcliffe said finding the cause could be slowed by bureaucracy across international borders, with difficulties transporting biomaterials across countries.

Parental consent, data protection and laws governing the use of human tissue in the UK could all slow down research, he said.

Finding an unknown cause is particularly difficult because cases may have multiple factors behind them that are not consistent across all illnesses.

The head of the European Center for Disease Prevention and Control (ECDC) said the disease was ‘quite rare’ but rated the risk to children as ‘high’ due to the potential impact.

The risk to European children cannot be accurately assessed because evidence of human-to-human transmission was unclear and cases in the European Union were “sporadic with an unclear trend”, he said.

But given the unknown causes of the illness and the potential severity of the illness caused, the ECDC said the outbreak “constitutes a concerning public health event”.