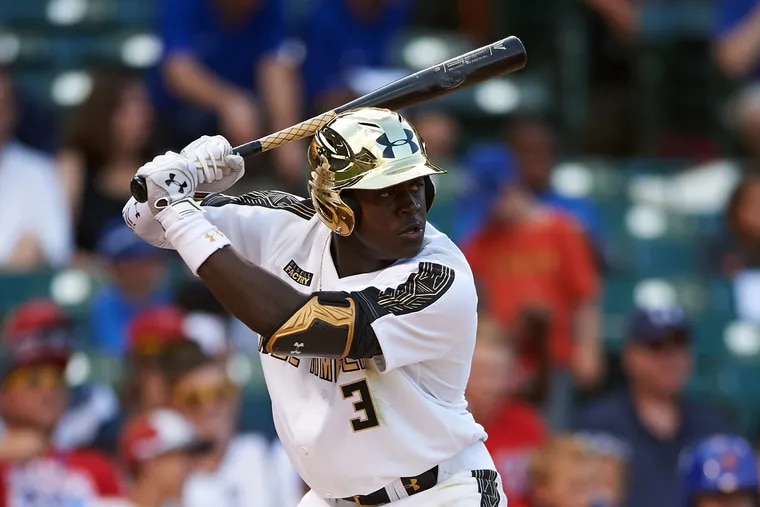 The fly ball to left field – as it seemed to do so many times at Starkville High Park – was lost in the sun, leaving the left fielder helpless and the coach feeling dreaded.

“You know what goes through your mind as a coach,” Travis Garner said. “‘Oh no. Here we are.'”

But then the center fielder came charging — out of nowhere, Garner said — reached out, grabbed, spun and crashed into the fence.

It was afternoon moments like the one in Starkville, Mississippi that made Garner and others dream that AJ Brown would one day make it to the big leagues. Brown would soon give up baseball for football and become one of the NFL’s leading wide receivers. He signed a four-year, $100 million deal with the Eagles after being acquired in Thursday night’s stunning trade.

But his future in football has not always been certain.

Brown’s first love was baseball, the sport his father wanted him to play, and he didn’t even play high school football as a freshman.

He was drafted in the 19th round by the San Diego Padres in June 2016 and signed with them weeks before heading to the University of Mississippi on a football scholarship. If Brown chose to stick with baseball, he had a major league path.

“I believe him to this day he could play center field in the big leagues,” Garner said. “One hundred percent. I think he was so good.

Brown came late to football after struggling at the peewee level. The Starkville High coach urged him to give the sport another chance as a sophomore, and he became one of the top college recruits in the nation. Baseball came much more naturally, so much so that Garner – who played baseball at the University of Alabama – needed just a few weeks to see Brown’s future after being hired in June. 2013.

“I went to the football coach and said, ‘Hey, I know he’s a really good football player, but I can tell you right now that kid can make money by playing baseball,” Garner said. “‘How is he good? He’s good. He’s really good. He’s really, really good. He said, ‘I’ll tell you this, coach, AJ will play in the NFL one day.” I started laughing and said, ‘OK.’ Turns out he was right, but I think I was right too. I think he could have played baseball for a long time.

Padres area scout Steve Moritz first saw Brown in August 2015 at Wrigley Field when Brown played in the Under Armor All-America baseball game. The game featured 12 future first-round picks and 10 players who have already made it to the majors, including Toronto’s Bo Bichette and Washington’s Carter Kieboom. Brown, who was a football All-American five months later, was in their class.

Moritz returned to Brown that spring when Starkville’s baseball season began, marveling at the way he played on center field and believing that Brown’s work ethic would fix any shortcomings in his swing. He watched Brown in practice, talked to his teachers, and told his bosses that Brown was a prospect.

“I remembered the first time I laid eyes on him and saw how big and strong and powerful he was. How athletic he was,” Moritz said. the other guys in high school, of course. The best way to describe him was that he was just dynamic.

“The way he patrolled center field was very impressive. There was an ease with the way he could get to the balls. He was content to slide on the ground. Offensive play was going to be a question. Was he going to knock? How much was he going to get? What would be the impact? He was big and strong and could hit the ball very far.

Most scouts walked away from Brown, believing his future was in football after he signed his football scholarship two weeks before the start of his senior high school baseball season. Moritz stayed on top of him.

If football wasn’t an option, Brown likely would have been picked much higher in the draft. The Padres, aware of Brown’s potential in the NFL, still wanted to take a chance on him as they saw him as comparable to Gold Glove center fielder Lorenzo Cain.

“I gave it an everyday rating; whether it’s true or false, I’m not sure,” Moritz said. “You’re talking about an athletic center defenseman who I think could have played any day in the major leagues. These guys usually go in the first two rounds.

“The discussions were, ‘Hey, this is some kind of high-potential talent.’ We knew it wasn’t a slam dunk because of the bat, but if he hits and works like we know, then we’ll have an impact player.

Brown and his friends used the indoor batting cage so much during their senior year that Garner put a keypad on the door and gave them the combination. A security camera allowed the coach to record from his home.

“The way I thought to myself there were a lot worse things kids could do at night than go up there and punch,” Garner said. “AJ was up there the whole time. They gave me some trouble, but it was worth it.

Milton Smith, who was drafted by Miami in 2018, was one of those kids who swayed with Brown in the cages. Smith has played three seasons of professional ball and will play next month for an independent league team in Illinois. He’s seen what it takes to reach the majors and believes his former teammate was headed there.

“He was a crazy athlete,” said Smith, who was also a wide receiver with Brown on the football team. “I’ve never seen someone who could look so easy and still be great at it. There’s no doubt in my mind that if he put in the same work he does for football, he could be in the majors. I’m telling you, because I’ve seen him do some crazy stuff in football. If he had the same work ethic, he could definitely play both.

“It was almost like when he was at home plate that he didn’t care at all and he was swinging and hitting him over the fence. It was so natural. It was easy for him. »

Brown was humble, Smith said, despite the buzz that followed him. Brown had football scholarship offers from nearly every major program, and coaches always visited the school having had over 1,300 receiving yards as a senior. Football coaches even went to baseball practice, tracking Brown’s every move before he finally settled on a college. It was a circus, Garner said.

But Brown handled it with confidence, ignoring distractions and staying focused on the baseball. He was quiet, Smith said, and did not seek attention. And then the games started.

“When you step onto the court, you have to have that kind of swagger about you,” Smith said. “Not everyone understands, it’s not arrogant. Some people see him as arrogant, but I see him as confidence. You have to have confidence if you want to be successful in what you do. You can’t go there scared.

“It’s hard to explain. If you know, you know. You can tell just by the way someone walks or the way they talk whether they’re confident or not. He was one of the guys you you could definitely tell he was confident.

Padres general manager AJ Preller made a deal with Brown and his parents that allowed him to sign his baseball contract before going to Mississippi to play football. The Padres told Brown he was always welcome at their spring training facility in Arizona, and Brown practiced there twice while in college.

“I remember telling him and his dad, ‘Hey, you’re a Padre. I know you play football but you’re a Padre, man. This is your house,'” Moritz said.

Brown tweeted earlier this year that he dreams of doing both sports like Bo Jackson did and posted a video of him swinging in a batting cage. He just needs practice, Brown told the Padres.

“I promise I’ll do better than Michael Jordan in baseball,” Brown joked.

The Padres still own his rights, but they aren’t counting on him to show up anytime soon.

“It’s a really cool story and I never thought I would be as proud as I am to see him now sign this contract with Philadelphia and be a leader in the community,” Moritz said. “He did a lot of great things in Nashville and was outspoken about mental health. I think that kind of stuff is just as cool, if not cooler than on-field accolades.

Garner is now a junior baseball coach at Bevill State Community College in Alabama. Years later, fly balls to left center field can still bring him back to that field in Starkville when a future NFL star seemed to find it all and allow him to dream of what it would have been like if Brown had stayed with baseball.

“I even catch myself saying it right now. If a ball hits space and lands, I’ll say, “Where are you, AJ Brown?” He would have caught that ball,” Garner said. “He was as good as any defensive outfielder I’ve coached. It’s my 19th year as a head coach, and I’ve never coached a player who could do what he did in the outfield. As good as a centre-back I’ve ever seen at this level.

” I’m happy for him. He signed a $100 million contract, so it’s safe to say he made the right decision. But would it be cool if he was a Major League Baseball All-Star and I could go watch the All-Star Game and watch one of my former players play? Yeah. But it’s hard to argue when I saw he hit the bottom line: $100 million. I think he did the right thing.”