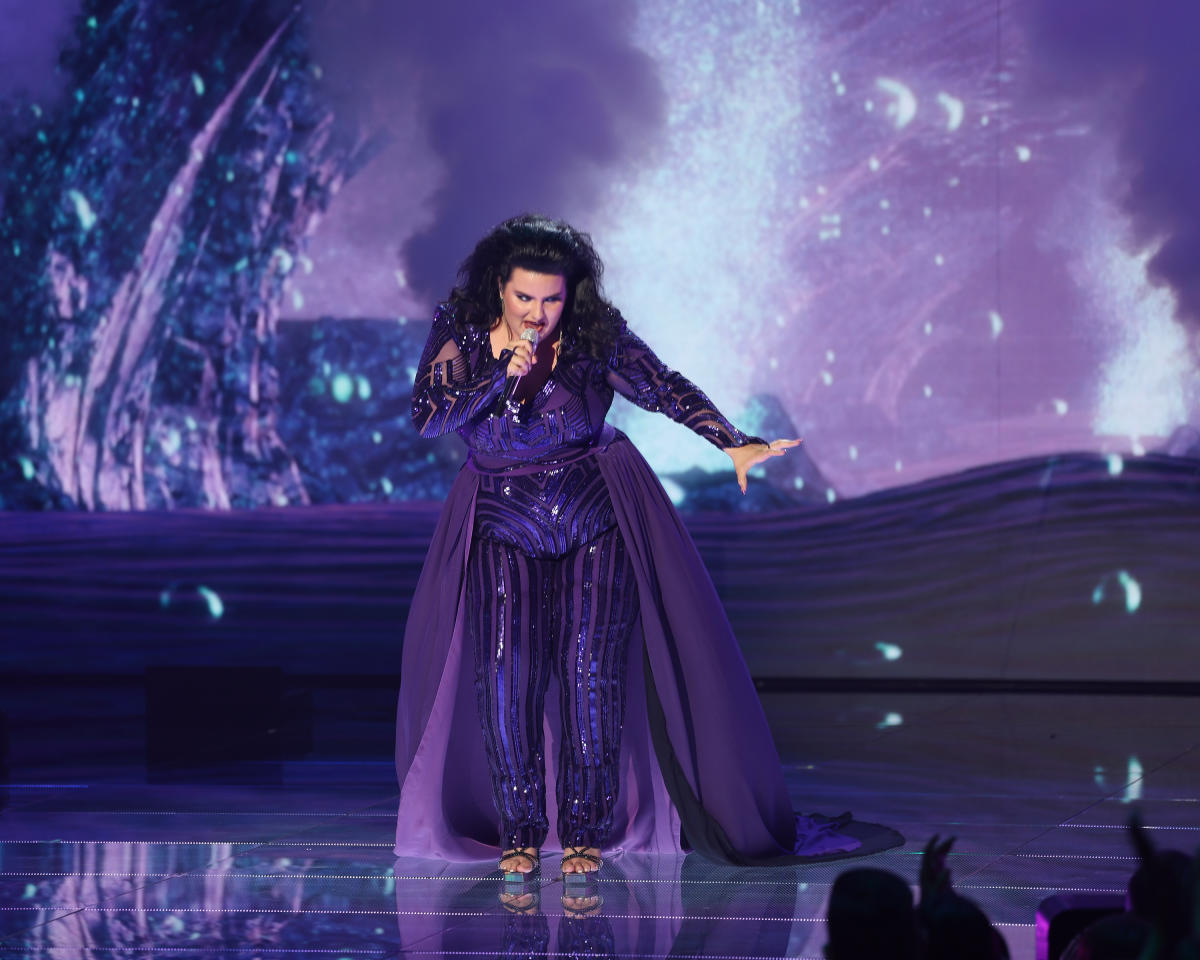 But, as fun as Katy’s Ariel act might have been, Katy had nothing on Sunday. Little Mermaid villainous Ursula, aka top 10 diva Nicolina Bozzo – who belted out “Poor Unfortunate Souls” intensely and had Katy quivering in her scales. Nicolina did Idol history as the first contestant to sing a bad guy song on Disney Night, and she proved that bad girls finish first. Delivering a big screen-worthy performance that actually felt more like an audition for a potentially winning run from Tony on Broadway, Nicolina brought all the spunk, blazing fire, and Lady Gaga-level drama. It was theater. Nicoline. didn’t just chew up the scenery – she devoured this. And everything worked.

“It was too good, it was scarygasped Katy, as Nicolina stood there, towering in her Hot Topic prom night finery. “Honestly, I think you stole the show. That that’s how you do it. That’s how we do show business: the entrance, the fog, the look. It was amazing. Host Ryan Seacrest even added, “It was like watching a movie.”

It was admittedly a risk for Nicolina to flip into sea hag/anti-heroine mode on this otherwise warm and fuzzy family night, but her bold move obviously paid off. Most of the other top 10 contestants played it safe, and those who played it the safest – Lady K with “How Far I’ll Go” by MoanaEmyrson Flora’s Stepford-smiley “Carried Me With You” from Ahead, Mike Parker’s well-meaning but clumsy cover of Phil Collins’ Tarzana ballad “I’ll Be in Your Heart” – were all rejected by the end of the night. That left us with our top seven. So, with the finale just three weeks away, it looks like Nicolina has secured her favorite status…but who else stands a chance of a Disney-style happy ending this season? Let’s evaluate the other performances of this week:

Noah Thompson, “You’ve Got a Friend in Me” (from toy story)

The untrained Noah doesn’t have a big set of power-pipes like Nicolina, but this cozy and cute Randy Newman classic fits his personality perfectly. He even reminded me a bit of the immensely likable Season 8 winner Kris Allen tonight. This nice boy could finish first. “I think that was my favorite song you sang besides your Rihanna song. … You gave it so much character and color and country singalong. It was one of your best vocals ever times,” Katy said. Lionel Richie told Noah, “It was the perfect song choice, and more importantly, your attitude was wonderful because it was a singing moment. love this.”

Huntergirl, “I See the Light” (from Tangled)

It definitely showed a different, softer side of the honky-tonk good time girl, and I appreciated Huntergirl’s willingness to step out of her comfort zone with a sophisticated string-laden ballad. However, I don’t think it suited him in the end. I was bored. Additionally, the song drew attention to her vocal shortcomings. However, the judges, who have adored Huntergirl ever since they presented her with that platinum ticket in the Season 20 premiere, adored her as usual. “To stand there and sing such a beautiful Disney song, I can only tell you, it’s your whole career there,” Lionel gushed. “Obviously you’re a country girl from Tennessee, but the elegance and beauty of this performance, I can see awards shows in the future,” said Luke Bryan. And Katy even declared this Huntergirl’s “Cinderella moment.”

Jay, “Remember Me” (from coconut)

OKAY, this was a perfect song choice for this particular contestant. It brought out a never-before-seen sultry feel and feathery texture, and the simple accompaniment of a solitary “sad guitar” was enjoyable, especially since Jay had a tendency to exaggerate, overthink and startle everything. He also worked the stage like a pro. I definitely see price discounts in his future. “I love that you started in a different position. Staging! You are the only one who used the stage. We want the scene to be used. We want this energy. You did that,” Katy said. “This is the second week in a row that you’ve truly given us timeless performances, and your picks are just classic sounds. That use of your falsetto throughout the song was something we hadn’t heard from all year,” observed Luke. And Lionel said to Jay, “It was levels you showed us tonight. Levels.”

Leah Marlene, “When She Loved Me” (from toy story 2)

Leah considered playing the piano tonight – something she has yet to do this season – and although I was initially disappointed to learn that she changed her mind at the last minute. , it turned out to be the right decision. Standing on the mic allowed Leah to really play the song with her infinitely expressive face – guest mentor Derek Hough said she looked like an actual cartoon character, in the best possible way. She was so lovely; what a pure and poignant performance. “You’re just a great singer. You haven’t gotten a bad mark yet in this competition. You always tell the story perfectly, and you did that with this song,” Luke said. “I’m just addicted to every word you sing. The growth is so beautiful and this delivery has been so smooth. I’m so proud of you,” Katy exclaimed.

Christian Guardino, “The Circle of Life” (from The Lion King)

At first I thought it was a great choice for the power vocalist…but so I remembered it was the song that sent the almighty Jennifer Hudson home in season 3, although her version is literally considered one of the best performances of Idol the story. Christian obviously wasn’t sent home, but I don’t think his version was on that majestic level of J.Hud. It was far from the best vocal; he was practically cries the song at times, failing to capture the dynamic of Elton’s ballad. But the judges and studio audience seemed to love it. Luke dubbed this soul singer “Christian Gonna-Need-a-Security-Guard-ino” and oddly told him, “You sang it perfectly.” Katy told Christian: “Before I started this song, I was like, ‘Oh, it’s a whole track and I hope it doesn’t overdo it. But it was perfect. It was the perfect circle. It was do notperfect. Maybe it sounded different through Katy’s eardrum-clogging plastic Ariel wig.

It was another completely connected performance from this endearing and lovable troubadour, with both his tenderness and his quiet strength. I loved it, and I felt modern — a bit of a Bastille/Two Door Cinema Club/Bleachers/Imagine Dragons/X Ambassadors vibe. Fritz has burned slowly but brilliantly throughout this competition, and I think we’ll see that in the final. (It’s a good indicator of Fritz’s popularity that his independently released EP hit No. 1 on the iTunes Pop charts last week.) “You have, once again, stepped into your light,” Lionel proclaimed. “Man, you always just nail this. … You understand the dynamic of taking the song and creating those moments in the songs. You don’t surprise me anymore. I understand. You deserve to be here,” Luke said.

Those top seven will face off again next Sunday, but before that, check back Monday for ABC’s hour-long special “The Great Idol Reunion,” which will feature former judges Paula Abdul and Randy Jackson and d beloved alumni like Ruben Studdard, Jordin Sparks, David Cook, Kris Allen, Scotty McCreery, Lauren Alaina and Maddie Poppe. Kieran, dim the lights and see you soon.