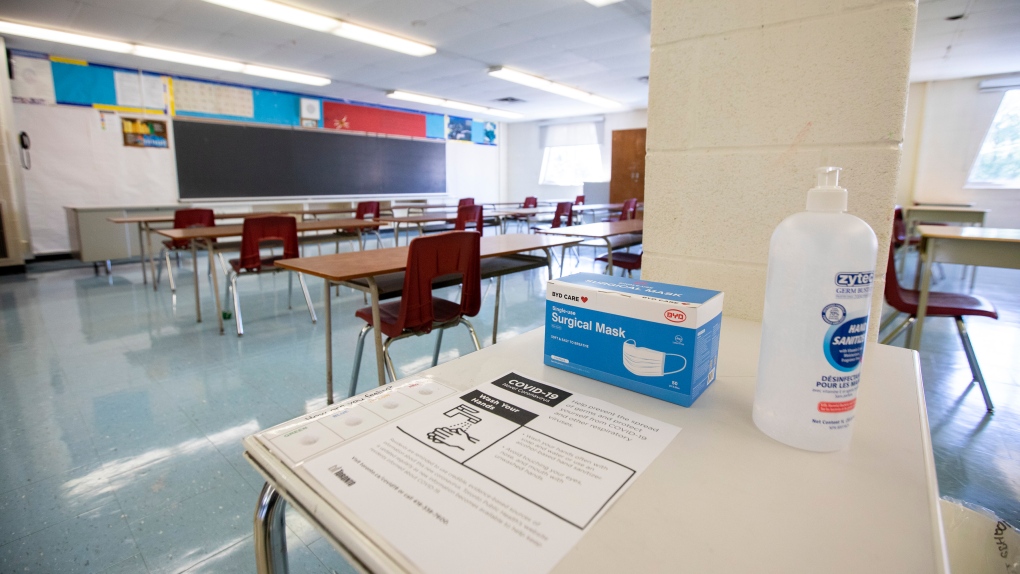 Ontario high school student Russ Levy says the last two years haven’t been easy on him or his peers.

The 17-year-old Mississauga resident, who also serves as youth advisor to the Center for Addiction and Mental Health (CAMH), told CTV News Toronto Tuesday, between climate anxiety and the pandemic, he’s seen mental health worsen over the past two years within youth.

On Tuesday, CAMH released the findings of their biennial Ontario Student Drug Use and Health Survey. Results show that youth surveyed across the province are indeed feeling increased feelings of depression due to the pandemic and climate change.

The survey, first launched in 1977, is used to gauge youths’ experiences with drug use, mental health, physical health, social media and internet use, video games gambling and school / family-related indicators. A total of 2,225 Ontario highschool students ranging from Grade 7 to 12 were surveyed using an online questionnaire between March and June 2021. The students spanned 122 schools across 31 school boards.

“I think the big thing that this report hit for me is that kids are not doing well after COVID-19,” Levy said.

Below is a summary of CAMH’s findings:

According to the survey, more than half of Ontario students reported experiencing feelings of depression about the future because of COVID-19, with more than a third of those students stating the pandemic has significantly negatively impacted their mental health.

Levy dealt with this issue himself – he found reintegrating into school during rolling closures to be a challenge.

“I became very withdrawn,” he said. “It made going back to school difficult because my motivation was shot – everything felt optional.”

Students surveyed also flagged remote learning and closures as an issue – just over a quarter said they found learning from home to be “very difficult.”

The report also highlights an increase in tensions between youth and their family members during the pandemic. Twenty-four per cent of youth said relationships with their parent / guardian worsened since 2020.

Just eleven per cent of youth said they “always” talked to a parent or guardian about problems or feelings. Instead, nearly half (49 per cent) said they “sometimes” shared these things with a parent and 40 per cent said they “never” did.

At the time of the survey, one-third (34 per cent) of Ontario students described their mental health as “fair” or “poor,” while nearly half (47 per cent) said they experienced “moderate” to “severe” psychological distress in the month prior.

“Whether it’s the pandemic or global warming – those kinds of things have very heavily impacted the mental health of basically everyone I know,” Levy said.

Levy said that, of the youth he knows, very few are able to access resources in a timely fashion.

“It’s impossible,” he said. “The waitlists are so long.”

This year’s survey was the first to ask students about eco-anxiety. It highlighted that 50 per cent of students are reporting feelings of depression about the future because of climate change.

Levy said eco-or climate anxiety is a concept his generation was introduced to early and is front of mind for many youths.

“The first time it ever really hit home for me was in Grade 2 – we watched this informative video explaining the earth was sick,” he recalled, adding that he remembers feeling a sense of helplessness, unable to process what could be done.

“As I’ve gotten older, I still feel just as helpless because now I know more but it still feels like there’s nothing I can do.”

He said the topic is often brought up in his social sciences class, and that his peers share the same feelings.

“We all overwhelmingly share this feeling of dread,” he said. “It’s kind of like, ‘How do we continue to grow as people and become the adults we’re meant to be in a world where it feels like we’re not going to live to be grandparents?'”

CAMH also surveyed students regarding their physical well-being. At the time of the survey, just over half of students reported their physical health as being “excellent” or “very good.” Eleven per cent said theirs could be described as “fair” or “poor.”

Sleep quality was fairly split between those surveyed – 49 per cent reported getting at least eight hours of sleep a night, while 51 said they did not.

One in five (21 per cent) said they were exercising for an hour a day in the week prior.

A vast majority – 83 per cent – of students reported spending three or more hours a day in front of a screen in their free time.

Of those asked, nearly one-third (31 per cent) said they were spending five hours or more on social media daily. Just about 14 per cent said they spent seven or more hours a day on the platforms.

Close to a third (30 per cent) of students reported being cyberbullied in the last year.

As far as video games and gambling, at the time of the survey, nearly one in five students matched the criteria for displaying a “video game problem.”

CAMH lists symptoms of a video game problem as feeling badly while playing, thinking of video games when not playing, spending increasing amounts of time gaming, hiding video game usage from those close to them and becoming restless or irritable when not able to game.

Twenty-six per cent of students said they gambled or bet money on an activity in the past year – nearly all (97 per cent) of those bets were for under $ 50.

Of the drugs asked about, high-caffeine energy drinks were the most commonly consumed, with just over one-third (33 per cent) of students reporting using them in the last year. This was closely followed by alcohol, of which 31 per cent reporting using.

A majority (60 per cent) of the students reported consuming alcohol in the past year, with 24 per cent having done so in the past month.

One in seven (14 per cent) said they used cannabis in the past year as a coping mechanism for a mental health issue.

While Levy said he hasn’t turned to substances as a coping mechanism personally, he has seen young people around him do so in the absence of easily-accessible resources.

“A lot of people I know are reaching to substances to cope – particularly like alcohol and cannabis – and experimenting with drugs they probably otherwise wouldn’t have if the pandemic hadn’t reached its way into everyone’s lives.”

Despite increased levels of depression and anxiety, the report indicates there are some positive trends occuring.

The survey found that binge drinking is down significantly among youth since 2019 – 8 per cent as compared to 15 per cent. E-cigarette and vape use is also down eight per cent.

The 2021 Ontario Student Drug Use and Health Survey (#OSDUHS) asked over 2,000 Ontario students in grades 7 to 12 about their mental and physical wellbeing, as well as risk behaviors. Findings show that the #pandemic has had a major impact on youth. 🧵1 / pic.twitter.com/74lcCcwhfJ