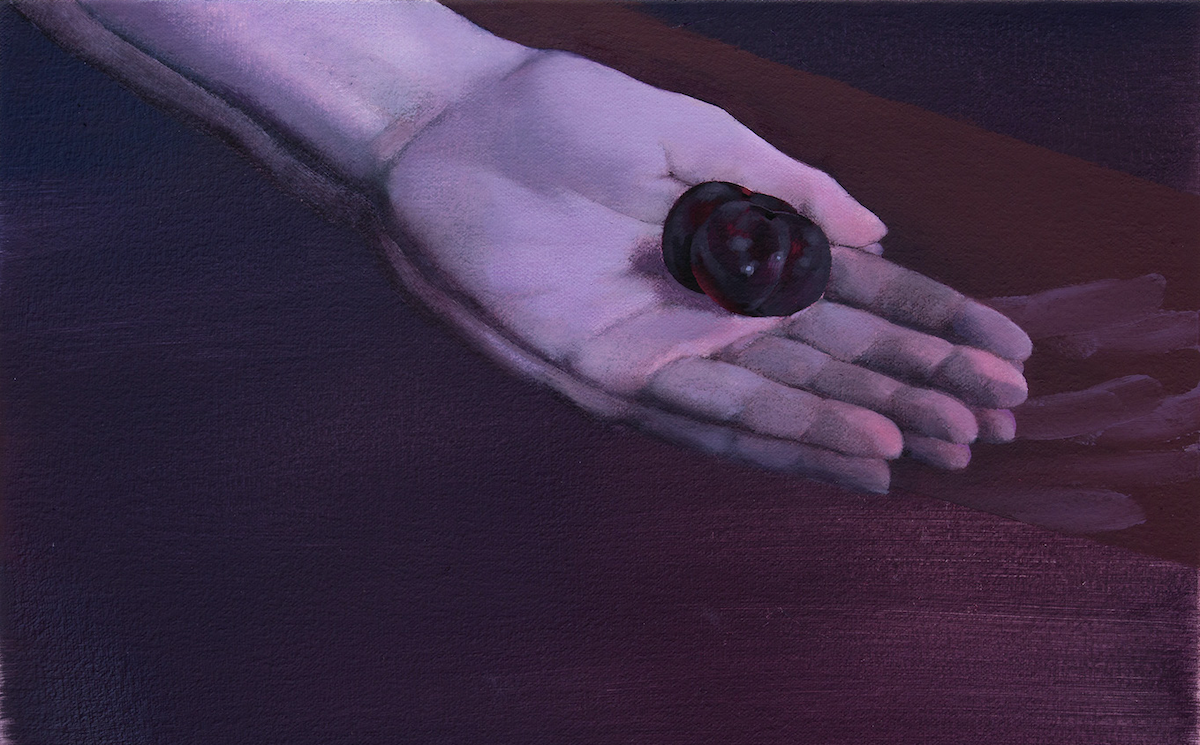 Painted in varying shades of mauve and measuring 13 inches by 15 inches, the painting “Two Plums” (2021) depicts an open hand and wrist extending slightly diagonally from the top left edge of the canvas. Two small plums lie in the palm. Under the hand, we see what could be his double. The mauve tones and the strange indirect light are reminiscent of Joseph Cornell’s film collage Rose Hobart (1936). Originally projected through blue glass, Cornell chose a “pink” hue when first printed in 1969. I mention the Cornell because, like the film, “Two Plums”, with its doubling, defines a space liminal.

It is this defining moment that Dana Lok continues to find ways to evoke in her impressive debut exhibition, Dana Lok: game and analysis, at the Miguel Abreu gallery. In 13 paintings ranging from 13 by 15 to 96 by 78 by 1 1/2 inches, Lok explores a range of perceptual puzzles, which evoke a deeper inquiry – part physical and part philosophical – into basic questions: how to know what i know? What metrics should I use to quantify my experience? In this convulsive moment, as physicists attempt to visualize models of dark matter, which have never been observed, and others reject science as an objective method, Lok’s interest in gaining real knowledge centers on this discrepancy.

What must be emphasized is the uniqueness of Lok’s investigation compared to his peers. I don’t know of any other artist pursuing this trajectory in painting. By asking these questions, she opens up the thing of painting in unexpected ways, particularly in terms of its existence as a two-dimensional surface, a three-dimensional object, a multi-layered reality, and a means of exploring her conjectures about the nature of reality. . as something that exists beyond our comprehension.

Informed by the magical world of cartoons, science textbooks, cinematic reframing and lighting, and art history – to name but a few of the artist’s inspirations and sources – Lok portrays scenes that convey a search that never arrives at a satisfactory answer. It’s about continuing to search, to take the world apart and put it back together. In “Parsing Parsimony” (2021), she invites viewers to meditate on the relationship between the whole and its parts. On a red and blue checkered cloth lying on grass, its lower right and upper left edges lit by flat, bright green circles, we see three interlocking, incomplete rectangles that form towering red and blue letters. The largest and tallest rectangle contains the following text, rendered in alternating red and blue letters:

YOU HAVE TO KNOW HOW IT’S MADE TO KNOW WHAT IT IS.

YOU MUST KNOW ITS PARTS TO KNOW HOW IT’S MADE.

YOU CAN REMOVE ITS PARTS AND PLACE THEM SIDE BY SIDE.

WHEN ITS PARTS ARE SIDE BY SIDE, IT DISAPPEARS.

The second lower rectangle, which appears to be half as tall and contains some of the text from the larger rectangle, reads:

The third and smaller rectangle, which extends out from the previous one, reads as follows:

Made up of distinct columns, each surmounted by a letter, the three decreasing rectangles seem both to comment on each other and to embark on a quest for a verifiable truth. The fact that Lok gives no indication of what it might be is part and parcel of the painting. Is it a thing or an idea? Are they irreconcilable?

Although this is not Lok’s sole focus, I see “Parsing Parsimony” and other works in this exhibition as a rigorous refutation of the identity of paint as a two-dimensional surface or a purely material thing, but which does not offer an alternative rooted in spirituality or transcendence. One could say that the artist wants a less miserly definition of the physical existence of painting.

True to this desire, Lok invites viewers to consider another possible line of inquiry in “Bone Surgery” (2022), where she juxtaposes the letters with a fragment of Thomas Eakins’ painting “The Gross Clinic” (1875). The letters, presented in the form of three groups of different sizes, read:

YOU DON’T NEED TO KNOW HOW IT’S MADE TO KNOW WHAT IT IS.

YOU DON’T NEED TO KNOW ITS PARTS TO KNOW HOW IT’S MADE.

YOU DO NOT NEED TO REMOVE ITS PARTS AND PLACE THEM SIDE BY SIDE.

WHEN HER PIECES ARE SIDE BY SIDE, SHE DOES NOT DISAPPEAR.

Depending on the circumstances in which they are applied, do these declarations have a validity equal to those of “Parsing Parsimony”?

This relentless desire to continue to question even in the absence of an answer seems to have inspired “Recursive Surgeon” (2021), the largest painting in the exhibition. Using figures found in “The Gross Clinic” and a palette of different mauves, Lok depicts a cropped view of Dr. Samuel Gross, scalpel in hand, directing his assistants to perform an operation on a patient’s thigh. In Eakins’ painting, the head of an assistant, seen at an angle, is located in front of Gross’ stomach, slightly off-center. Lok’s reinterpretation of “Gross Clinic” includes a close-up of the operation in the truncated outline of the head. What complicates this view is that we also see the front part of the wizard’s face emerging from the shadow cast by Gross’ scalpel-wielding hand, looking – it seems – in the larger version of his head, thus observing and participating in the operation. .

Meanwhile, in the upper left corner of the painting, the faces of the medical students emerge from the painting, as if emerging from a thick fog, their hands supporting their heads, not exactly delighted with the attention. I don’t think it’s an accident that Lok omitted the woman sitting to Gross’ left, who is hiding her eyes. What does seeing mean? What is the relationship between vision and the search for truth? Is it a fixed or changing relationship? What does it mean to be open, even as you venture into murky territory? Wouldn’t this painting also be a meditation on vulnerability, change and mortality? By incorporating and revisiting Eakins’ painting – which merges detached realistic observation with objective scientific study – isn’t Lok commenting on the foundations of her own quest?

Throughout the exhibition, Lok returns and reexamines different motifs: a partially open book, a knife on an empty plate, and a hand resting on an identical hand. The only outlier in this gathering is “Catch” (2022). As often as I returned to various paintings in this exhibition, something different happened when I first watched “Catch”. I was transfixed. I made a mental note of where the painting was because I wanted it to be the last one I watched, even though I hadn’t seen the whole show yet.

We look down into an open space among bushes and a scattering of white flowers. The lighting is artificial, like the one you remember from a dream. What could be a cobweb or a net extends inward from the branches, weaving the shape tighter as it descends into a hole in the ground, like a funnel. The title of the painting can be read in many ways: grabbing something, taking the opportunity to leave, getting tangled up or being caught in the act. Where does my mind go when looking at this painting which evokes an unknowable domain? What is this impossible union of the net, the tablecloth and the hole? As unlikely as the combination may seem to us, something also seems to be irrevocably right about the membership. The limits of vision and the conclusion of conjecture and dream do not coincide. Although we live in this liminal space, we don’t want to acknowledge how little we know as we move forward.

Dana Lok: game and analysis continues at the Miguel Abreu Gallery (88 Eldridge Street, Lower East Side, Manhattan) through May 7. The exhibition was organized by the gallery.