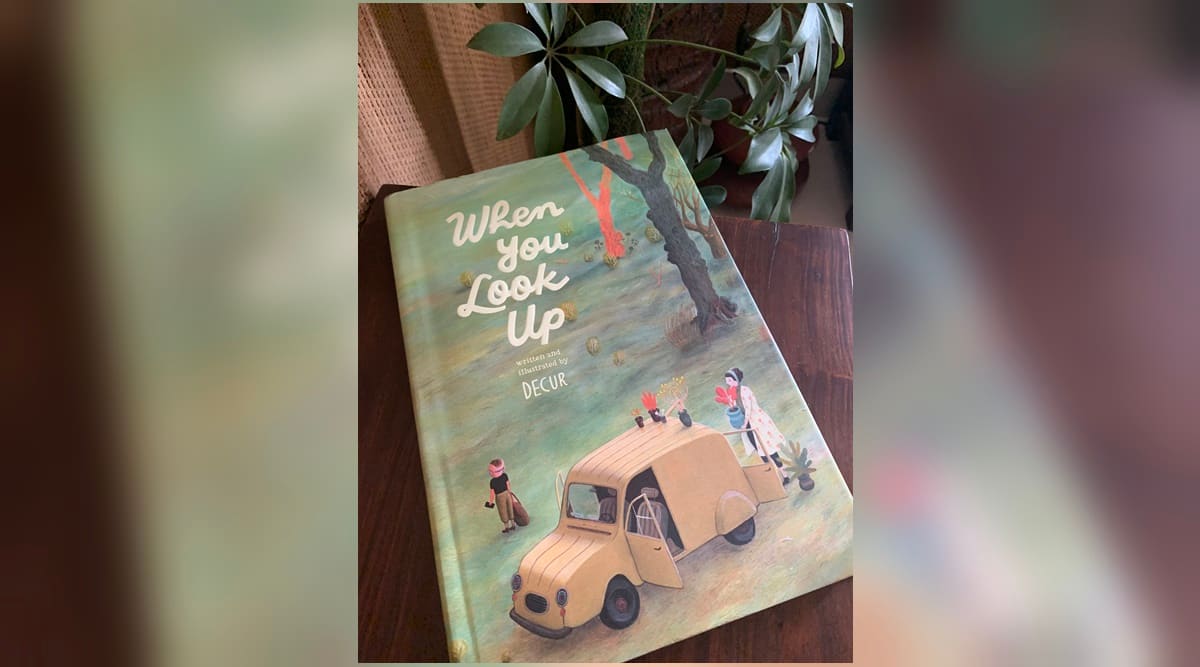 The reason I bought’When you look up‘ is because its back cover and jacket carry no blurb. The cover artwork extends to the back and aside from the mandatory ISBN details, it is bare.

This nudity spoke to me in a way that very few books do. It was waiting to be discovered and unraveled by the agendaless reader usually already assigned to it by creators. I find blurbs entertaining. Almost as if the book was set in the reader’s mind and what they saw in the book was channeled in a certain direction through words (especially, never the author’s) before they even started. . Can an individual’s reading be purely subjective?

Not knowing what to expect inside When you look up, the first two prints left me disappointed as the narrative began to edge dangerously close to the mundane: a mother and her ten-year-old boy move – and the town – and the boy is only interested in on his phone. Lorenzo is an all-too-familiar frustration at finding his cell phone with no signal, and the mother’s fairly predictable pontification along the lines of “When I was your age…I stuck my head out the window…and pretended to fly.”

Umm, we’ve been playing those words until we’re sick in our heads, in our homes, in our lives, haven’t we? I didn’t know if I was ready to read another book about it.

Usually, I read the picture book cover to cover before buying it (this is also the reason why I haven’t bought one online. EVER.). But the day I picked it up with a bunch of others, I was in a hurry to go somewhere else. So here I was starting to deal with my disappointment with the book and my own stupidity. What was I thinking buying a book with ‘When you look up‘ on his cover, by the way? Stupid, because at Rs 2000 plus, the dissonance after purchase wasn’t exactly cheap.

But I stuck with the book. Because of the artwork. Because I couldn’t take my eyes off it. His breathtaking grace and calm would not let me go.

So I keep reading. Next. And then again and again. Without a pause, without looking up, without realizing how the words too had begun to grip me, to seduce me, to devour me. Until I got to page 142 (out of 174, yes, that’s a big picture book) and stopped.

“I didn’t want to be rescued, I just wanted to be found.”

There was something about that line that I couldn’t quite figure out.

These words are spoken by Gregorio, a mouse who “voluntarily floats in a tiny matchbox in the open sea” with “danger constantly stalking him”. This prompts him to write a letter saying:

‘Hello,
I don’t know where I am.
There is only the horizon as far as the eye can see.
Please find me.

He put this letter “into a bottle and threw it into the vast void” with a SPLASH, and continued to float “for what seemed like an eternity, so long (his) whiskers turned white”.

Finally, one day, he hears a voice calling him from far away.

After confirming that the mouse floating in the matchbox is indeed the same Gregorio whose message he found, the “mysterious traveler generously shared his provisions with (him)”.

Yum, yum, yum, the cake. And the business.

But soon they said “goodbye”.

Wait what? Could Gregorio follow the mysterious traveler and return to a safer country where he is no longer alone? Wouldn’t he?

“I didn’t want to be rescued, I just wanted to be found.”

The words stared at me and wouldn’t let me go any further.

I wasn’t sure I had read them properly, so I read them again, this time, being careful not to miss a single letter anywhere, just in case I had done so sooner.

“I didn’t want to be rescued, I just wanted to be found, so we said goodbye…”

Surely there was something inside her trying to get to me deeper.

I read the line a fourth time, a tenth, then several times until I suddenly understood why it wouldn’t let me go any further.

Because in those simple words was unlocking the deepest wisdom I needed to make sense of a particularly difficult but precious relationship that had been baffling me for some time in my own personal life.

I knew I had to write my own letter before I finished reading the book that just managed to trigger one of the most priceless revelations for me.

So I took out my cell phone and wrote them this:

“The last few times I spoke with you, I was able to “hear” your internal struggles. Almost as if they want to be heard out loud, but you won’t let them. My natural instinct is to help you heal. I’m frustrated because you won’t let me help you. But I finally began to understand that not everyone comes into our lives to be healed or to heal; to be helped out of their vulnerabilities or to help you on this journey; be saved or save. I cannot help you or save you because that is not what you are looking for in me.

But even so, if the thought makes you smile, always remember that I am here and around, now and forever, as eternally as ever.”

I pressed ‘send’, hugged When you look up close to my body and I cried.

And I cried because what got me my big aha moment with such disarming ease was a picture book. Yes, a picture book (!) so safe and secure in itself that every reader who picked it up would certainly have to go on a unique journey. It felt as if all my love for picture books over the past two decades primed me to absorb the depth of that simple phrase in that moment that both consumed me and liberated me.

Feeling lighter a bit later, I returned to the book to see what more Gregorio had to say:

“I didn’t want to be rescued, I only wanted to be found, so we said goodbye and (the mysterious traveler) again immersed himself in the depths. Still, I kind of felt like he had reappeared in me.

I closed my eyes, a smile in my heart.

I, the one reading this, smiled too.

The story of Gregorio the mouse ends here, but that’s not where the book ends. And that’s not where it all started either. There are many more in there. This is a deep, powerful and brilliant picture book about stories within stories, stories about stories, stories for stories. It is a book that takes you to your own hidden depths and invites you to become both creator and performer. It’s about reaching within and reaching out.

And it’s a book about being a fearless reader. What I would “remember” would be very different from what you might see. Remember, this is a book without a blurb, isn’t it? It is because he wants to inspire us to become our own intrepid explorer.

And the lifeguards too, perhaps. Because we don’t need others to save us.
____

Richa Jha, a devourer of picture books, reads, writes, publishes, offers, buys, borrows and hoards them for herself. She believes there is no better life coach than a just created picture book. In this monthly column, she’ll share some of her personal favorites.

At best, picture books are powerful meditations on life, its quintessential soul curry, as I call them. Choose them no matter where you see yourself on the reading spectrum – a book novice or an incorrigible bibliophile. They will never let you down.

PS – She’s also on a mission to turn everyone into a picture book devourer. The world needs more of us.

For all the latest Parenting NewsTo download Indian Express app.