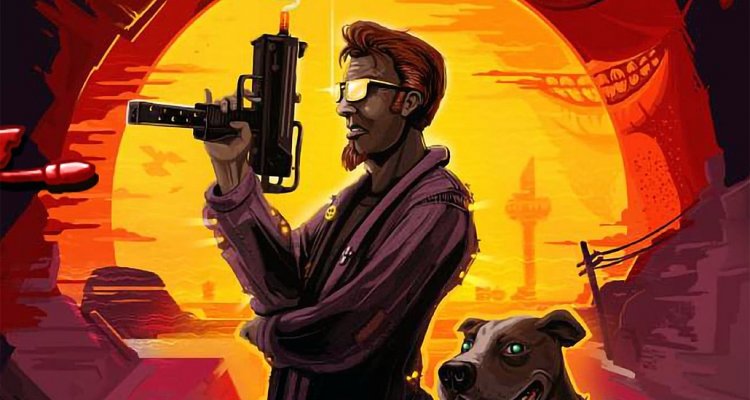 The Postal 4 – No Regerts review is about a game emerging from nearly three years of development: will its low-grade humor stand the test of time?

You know Sharknado, unthinkable 2013 film in which adorable sharks jumped out of a sea horn causing terror on the streets of Los Angeles? It was without a doubt the most striking example of a work “so bad as to be beautiful”. Postal 4 fits right into the first part of the famous phrase, but will the usual doses of vulgarity and violence be enough to complete the sentence and enter the Olympus of videogames?

Reading the comments on the early access version it would seem so, we will try to provide a more critical point of view in our Postal 4 review: No Regerts.

The Postal Dude is back!

This is not a typo, you read that right: Postal 4 starts off on the wrong foot right from the title. Filed the unfortunate parenthesis of the renegade Postal 3 (that was just bad, with an enviable 3 given by our Thomas), whose realization had however been entrusted to an external team, Running with Scissors started work on the fourth chapter three years ago. The game’s skeleton remained similar to that of Postal 2: the title is divided into five days (from Monday to Friday) and in each of them our Postal Dude will have to try his hand at increasingly epic feats. Having left the city of Paradise, the scene of the previous raids, the filthiest hero in videogame history is robbed of his camper while carrying out his physiological needs together with his faithful dog Champ.

Without a dollar, but with a great desire to climb the social ladder, he arrives in the town of Edensin where he will start with the most humble jobs: maintenance of the sewerage system, dog catchers, prison guards. Obviously, every task can be completed with the attitude of those who “go to the post office”, for which the fights in prison will be quelled by shooting, the traffic jams of the sewers cleaned by throwing grenades inside the pipes (perhaps paying attention not to be overwhelmed by debris …), fines for regularly parked cars by destroying parking meters. So there are multiple ways to solve quests, although in most cases you will prefer the faster and more violent one. Why waste time catching cats with kibble when they can be shoveled and then used, in spite of themselves, as the silencers of a Kalashnikov?

Weapons and other amenities

In this regard, the arsenal of the Running with Scissors game proves to be among the most creative (and vulgar) conceived: we will find, in addition to the classic weapons that mimic those of PUBG (including the red flare gun), cages of pigeons, mop for floor cleaning, spray cans up to the definitive Spurt’N’Squirt 9000, whose name shouldn’t need any explanation. The triviality, especially of a sexual nature, are intrinsic in the DNA of the game but are probably no longer as disruptive as they were at the beginning of the millennium with Postal 2, either because the shock effect has been assimilated, or because that flash of madness that had characterized the first two episodes. One of the designers’ greatest merits is to have filled the protagonist’s days with a series of hilarious tasks, such as sabotaging the carnival rides or the petition to install a bidet in every Edensin home. Of course, the most reluctant citizens will be happy to put their signature with a gun pointed at the temple …

However, the real reason for the success of the series is the numerous quotes, ranging from TV series, to movies, to video games themselves. On Thursday, for example, Postal Dude has to deliver catnip in the basement of a pet shop, with a clear reference to Breaking Bad, but scattered here and there are also homages to the Throne of Swords, Harry Potter, Demolition Man. There are also references to other games, in particular to the first id Software titles, Half-Life, Duke Nukem. In short, you will spend a good part of the exploratory phase just for the pleasure of finding all the easter eggs hidden by the developers, some of which in bizarre places. The level design is another of the most interesting aspects of Postal 4, with locations that develop on both floors and contain numerous hidden passages.

A disaster across the board

If from the “cultural” point of view and the level structure the new episode of the saga proves to be on a good level, under thetechnical aspect it’s a disaster across the board. We are in the presence of a title so poorly optimized and graphically poor that the doubt that certain opprobriums have been artfully put there is more than legitimate. Postal 4 uses the fourth version ofUnreal Engine, a toolset that should not have any secrets by now even for less experienced programmers, let alone for those who have been on the scene for over twenty years. Yet, the game is marred by loading times that are unbelievable: even the introductory logo snaps! You will be able to whiz with your electric wheelchair for only a few tens of meters, after which Postal 4 will stop for about ten seconds to load the next portion of the map. An open world map that, to be generous, is smaller than that of the first Assassin’s Creed, year 2008, which already at the time had no problems of this kind. And that’s despite Corsair’s 32GB of RAM and ultra-fast SSD (an MP600 Pro XT) used in the editorial reference system.

This is not just bad optimization, on the contrary: this is just the tip of the iceberg. Speaking of physics, for example, you will immediately realize that the “hitbox“are random: hit a passerby in the waist with the machete-boomerang and you will find him beheaded, throw a grenade at him and he won’t bounce, sprinkle him with petrol and the wall next to him will catch fire.

On the other hand, there are many rumors

Since we like to turn the knife into the sore, just like the Postal Dude would, let’s talk about artificial intelligence. Here we enter the field of metaphysics: at any level of difficulty the behavior of the inhabitants of Edensin does not change. You can shoot a protester in procession and the other five around him will stand still as if nothing had happened, as well as some prison rioters who, after hinting at a reaction, will freeze to await their execution. On the other hand, try to put a fine on a parked car and the owner will take out the .22 in a matter of tenths of a second, even if he is walking across the block.

Total embarrassment also for the graphics: in Arizona (the state where the developer is based) the calendar must have stopped at the beginning of the millennium, because Postal 4 struggles to keep up with the games that ran with the first GeForce. Sorry to be so strict, but, just to give an example, the Blood Spear tech-demo tested a few months ago and created by a group of novice high school students, by comparison it looks like a triple A title.

It seems that all the effort has been poured into the dubbing: Postal Dude, initially played by Jon St. John (the same as Duke Nukem and Serious Sam), can also take on the historic voices of Rick Hunter (Postal 2), acclaimed by fans after an initial rejection and even Corey Cruise, who had lent his own vocal cords for the third chapter. This is probably a real record.

Postal 4 does not disappoint expectations: those looking for gratuitous violence, vulgarity and bad taste satire will find bread for their teeth. Results that are obtained using the winning basis of the second episode, structured in five levels for as many days of the week: a little more originality would not have hurt. Unfortunately, the technical problems are too obvious to overshadow: poor optimization, graphics bordering on indecent and numerous bugs still make it look like an embryonic title, despite three years of development. Or maybe this was precisely the intention of the programmers? The vote at the bottom should be read according to the answer to this question: the writer thinks not and has adopted a critical spirit, but for the followers of Running with Scissors the value can easily be doubled.