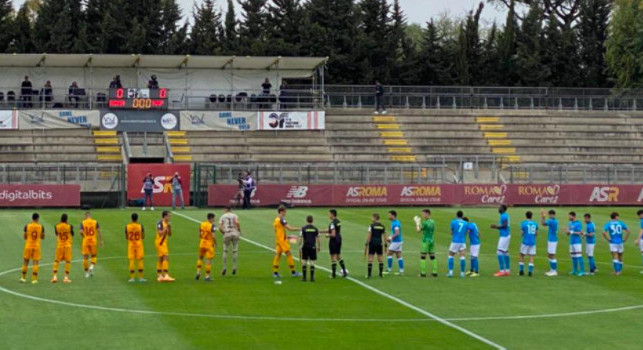 The Naples Spring face Roma today for the 30th day of the Primavera 1 TIMVISION championship. The match will be played at the Tre Fontane stadium at 4 pm.

17.51 ​​- Over! Napoli conquers the field of Roma leaders! Brawl in the final with Cherubini who clears up with Spavone, very nervous Tahirovic held back by his teammates. The two benches are also on the field, with that of Napoli celebrating in the middle of the field. Napoli wins a very precious victory for the purposes of the standings, conquering the field of leaders Rome and temporarily moving away from the classification area valid for the salvation playout.

95 ‘- Idasiak again! Cross from the left, the Pole flies to block the ball well beyond the small area.

95 ‘- Jewels also warned for interrupting the game. Souls that overheat, Rome very nervous in search of a draw

94 ‘- Expelled Morichelli for going to say something to a Napoli player who was left on the ground.

93 ‘- Napoli complicates their life: cross from the left and ball bouncing in the area, Marchisano leans on his chest for Idasiak with an opponent at short distance.

92 ‘- Miracle of Idasiak! Pitched ball at the edge of the area, Cherubini kicks on the fly: the ball bounces in front of Idasiak who rejects as he can.

91 ‘- Sparks in midfield: Coli Saco falls to the ground pushed by Morichelli. and there is a face to face between so many players. The referee warns Saco and Morichelli.

88 ‘- Another punishment from the trocar for Roma, a high ball grabbed by Idasiak.

83 ‘- Cassano is warned, who misses the ball in a slide and impacts on Gioielli, also in a slide to win the ball.

82 & # 39; – Another cross for Roma, this time from the right: he is weak, and Idasiak still arrives with his gloves.

80 ‘- Cambi Napoli: outside Ambrosino and Iaccarino, inside Pesce and Gioielli.

79 & # 39; – Rome in total control of the match, advanced center of gravity but the Napoli defense always manages to stem the Giallorossi attempts.

77 ‘- Clash between Morichelli and Ambrosino, Oliveras puts the ball out to let the medical staff in.

76 ‘- Roma continues to attack: Cherubini’s shot deflected by Morichelli, high parabola and Idasiak who has to hang on the crossbar, not touching the ball, arrives on the developments of the punishment.

75 & # 39; – Warning for Napoli: Iaccarino stretches Volpato and is sanctioned by the referee.

73 ‘- Changes for Napoli: Spavone for Cioffi and Marchisano for Vergara. Frustalupi covers himself for the last twenty minutes.

72 ‘- Sensational! Roma with a series of triangulations enters the area on the right, Padula kicks towards the goal but the rebound ends a few centimeters from the post.

70 ‘- Foul by Faticanti on Coli Saco in mid-field, yellow card and Napoli midfielder who remains on the ground in pain. Struggling in the tackle he takes both the ball and Saco, however.

68 ‘- Other changes for Roma: in Missori and Padula, for Satriano and Ndiaye. De Rossi changes form and Roma go to the back four.

66 ‘- Great opportunity for Roma! Low cross from the left, spiked on the far post but the ball slips to the bottom and no one intercepts it to put it behind Idasiak. A few seconds later, Cassano’s cross again but Idasiak rejects.

64 ‘- Ambrosino devours the 0-2! Launch from the rear with Ambrosino who jumps from the chest Morichelli: the one on one against Mastrantonio, however, sees the goalkeeper deflect his right hand into a corner.

62 & # 39; – Roma risks with a horizontal pass, Napoli is not reactive to take advantage of the chance.

60 ‘- Change Rome: Oliveiras for Rocchetti and Cassano for Louakima.

58 & # 39; – Napoli starts again for central streets with Acampa, but the launch for Ambrosino is long.

57 ‘- Satriano starts the action from the right, the ball in cut arrives on the other side: scrum in the penalty area with two yellow and red, Cherubini kicks and on the rebound complains of a touch from Hysaj. Protests by Roma players, everything is regular for the referee.

56 ‘- Cross from the right, Idasiak rejects with his fist but not far away: it is Saco who takes the ball and earns a foul.

54 & # 39; – Rocchetti receives from the right and tries a left, corner for Roma not exploited.

53 ‘- Idasiak again! The blue goalkeeper manages to block Volpato’s right-footed shot inside the penalty area. On the development of the action, Rocchetti’s cross was not crossed by anyone.

51 ‘- Beautiful descent of Acampa through the central streets, the ball goes to Cioffi who unfortunately loses possession.

48 ‘- Foul by Barba near the corner flag, Volpato’s free-kick is deflected into the penalty area but Idasiak has no problems blocking the ball.

16.46 – The first half ends: unexpected result in Rome, where Napoli took the lead with the first goal opportunity thanks to Ambrosino, then the blue of Frustalupi held up in front of the reaction of the yellow and red baby.

45 ‘- Napoli opportunity! Corner from the right, Saco’s veil: the ball crosses the small area, reaches Ambrosino but the touch is deflected for a corner.

44‘- Cioffi in the offensive phase tries from the outside, his right is out of size.

43‘- Satriano back to goal, turns and tries the right. Easy to block shot for Idasiak.

42‘- Satriano enters the area and serves Louakima, but Louakima kicks on an opponent.

41‘- Thrill Naples, Iaccarino’s cross arrives on the developments of a corner: Mastrantonio rejects.

39 ‘ – Very occasional for Rome! Played in the center of the area with the ball sorted for Tahirovic who, from outside, kicks with his left: Idasiak makes a good guard.

35‘- Hard contrast of Satriano on Costanzo: the Napoli defender remains on the ground in pain and then gets up.

34‘- Cherubini enters the Napoli area but commits a foul, the game interrupted by the referee.

30‘- Faticanti opens on the right on Louakima: low cross for Cherubini, but the latter arrives late.

29‘- Napoli sees themselves forward: Coli Saco tries the shot, gained another corner from the Azzurri.

28‘- Louakima again on the right wing, but his cross was closed by the opponent’s defense.

26‘- Louakima pushes on the right wing, winning a corner. On the developments Morichelli stops the ball but fails to kick.

24‘- Cherubini puts in a cross from the right, but no one intercepts the ball.

16‘- Excellent save by Mastrantonio, still a corner kick for Napoli.

15‘- Rome is finally ahead. The Giallorossi win the first corner of their match.

12 ‘- GOOOOOOL NAPLES !!! Cross from the right, Ndiaye holes the intervention with his head: Ambrosino controls, and then unloads a right into the net! Goal number 16 in the league for Ambrosino

10 ‘- Roma prefers to keep the pace low and look for the right passage.

7 ‘- Napoli breaks through on the left with Acampa, the winger enters the penalty area but is countered.

6 ‘- Roma takes control of the midfield, keeping possession of the ball.

3 ‘- The teams are studied in the middle of the field.