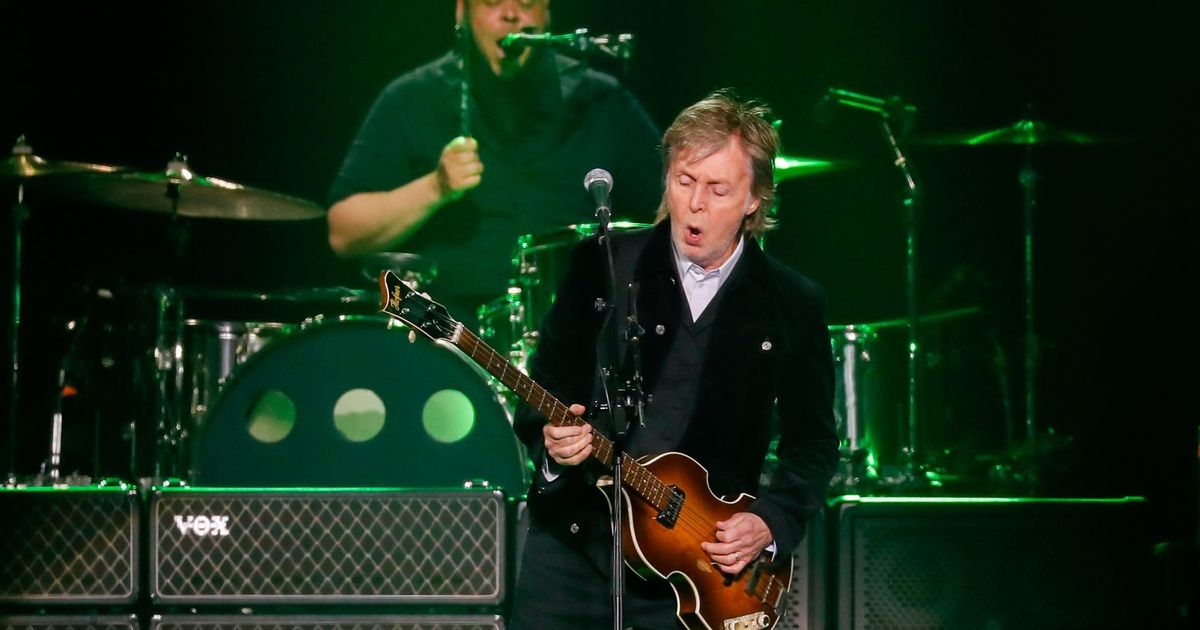 Climate Pledge Arena was as crowded as I saw it. The thousands of strangers who have seen Paul McCartney perform dozens of times and locals – some who were there when The Live Beatles played The Old Kingdom in 1976 – had already been up for almost two hours. when the sweet piano intro to Wings’ James Bond song “Live and Let Die” lulled them into a false sense of security.

There was an audible gasp as the flame cannons at the front of the stage sounded, apparently to the delight of longtime McCartney guitarist Rusty Anderson, who was either tickled by the crowd’s reaction , be a little scared himself. Before anyone could catch their breath, the expansive, cinematic melody flew away faster than a BMW motorcycle, with a Mysterious Rock Star Breeze (aka a hidden fan) blowing McCartney’s feathery hair as he hammered at the piano. Fireworks crackled and banged overhead during the crescendo of somersaults, hairpin turns and villain duels that capped the most dramatic number of McCartney’s marathon, setting off the longest applause of the night once everyone finally got up for the air.

Turns out the Liverpool lad, who turns 80 next month, still has some glare left and we hadn’t even reached the recall.

On Monday night, McCartney and his ace backing band settled into their first of two Climate Pledge Arena shows, already sounding in mid-tour form (minus the strained vocal chords) just two dates after their first outing since the pandemic. . With the aptly titled Got Back tour opening in Spokane last Thursday – a city Sir Paul had never played – Washington state has become the center of the rock icon’s COVID-era comeback and seemed to pick up where his last shortened outing left off, with a similarly constructed set list. (They even closed with the same mammoth “Abbey Road” medley.)

Typically, McCartney’s first show in Seattle in six years was a two-and-a-half-hour stroll through the superstar’s extensive catalog of solo material, choice Wings cuts and Beatles classics, which includes some of the songs the most enduring in the history of popular music.

After that explosive “Live and Let Die,” a song that found a new generation when the Guns N’ Roses cover made it a new hit two decades after its initial release, the crowd joined McCartney for the most famous na- na-na-nas of all time in a harmonious “Hey Jude”. Even among the greatest tentpole artists, the timeless songs of McCartney/the Beatles have achieved a rare cultural ubiquity that transcends age and demographics. Twenty-five years from now, it won’t be surprising to see a child stepping off a school bus running through bean sprouts wearing a Beatles shirt under his Class 2047 letter jacket.

Looking at the multi-generational faces na-na-na’ing in unison, it was one of those arena show moments that makes you feel like everyone on the planet is vibrating on the same song at the exact same time. As long as you haven’t checked Twitter.

Hours before the show, the still divided country was rocked by a report that the Supreme Court may be on the verge of overturning Roe v. Wade, potentially overturning the half-century-old abortion rights ruling that is one of many flashpoints in our polarized society. An artist who has selectively weighed in on politics, Macca didn’t hit this one with a 10-foot mic stand. On Monday night, he came closest to politics waving a Ukrainian flag as he reappeared to start the encore with an easy-to-follow “I’ve Got a Feeling.” That and the PETA members handing out literature in the lobby. (Sir Paul has been meatless since the 1970s.)

Using footage from last year’s Peter Jackson-directed “Get Back” docuseries, McCartney duet (via video) with his late companion John Lennon, turning to face the screen when Lennon’s verse began. The move might have seemed forced and cheesy, but turned out to be fun, heartfelt and relevant given the buzz around the illuminating three-part documentary that captured the making of what became the last album the Beatles would release in 1970.

McCartney also greeted his esteemed songwriting partner earlier in the night, with a tender, mournful “Here Today,” which he explained was a letter to his old friend that he “didn’t never had the chance” to write during Lennon’s lifetime. And not to be forgotten, McCartney played a slightly bloated version of George Harrison’s “Something” using a ukulele the other fallen Beatle had given him.

Part of the fun of a latter-day McCartney ensemble is the feeling that you’ve got a not-cheap seat to a piece of rock ‘n’ roll history, whether it’s taking the rickety “Can’t Buy Me Love” which opened the show (absent screaming teenagers) or hearing A-level rock folklore told directly from the living legend himself After rocking Wings cut “Let Me Roll It” chained into a brief jam “Foxy Lady,” McCartney recounted the one about Jimi Hendrix covering famous “Sgt. Pepper’s Lonely Hearts Club Band” a few days after its release, after which he asked Eric Clapton, who was in the London audience, to tune his guitar. It’s a touring favorite that will probably never get old and has always worked as a reciprocal nod to a hometown hero, even if Macca didn’t acknowledge Hendrix’s Seattle roots. (Maybe next time, Paul.)

While there was undoubtedly a nostalgia factor for the many baby boomers in the house, it wasn’t entirely a night of throwbacks. McCartney joked about how the sea of ​​cell phones that lit up with every Beatles hit went out every time he played a new one. “Women and Wives,” a standout from her tasty pandemic album “McCartney III,” may not have been a crowd favorite by comparison, but suits her raspy voice these days. The dark piano ballad had Macca sounding more like a less raspy Mark Lanegan than the boy singer who just wanted to hold your hand 60 years ago.

The closest thing to a dud was the Coldplay string “Fuh You” from Macca’s 2018 album “Egypt Station.” Although the cheeky tune performed better live than on record, its modern pop swing and dynamic felt a bit out of step between “Lady Madonna” and the swirling, psychedelic oddities of “Being for the Benefit of Mr. Kite!”

With a number of baby boomer musical icons aging, there was speculation that COVID-19 could inadvertently mean the end of touring days for some of the generation’s still active stars. Generally speaking, it didn’t exactly turn out that way, although sadly the Beatles’ former rival the Rolling Stones would never return to tour again with founding drummer Charlie Watts, who died the year last. While Macca seems to be in great shape, still shaking his hips to remind us that he’ll always be the cutest, it’s hard not to wonder when or if the sounds of a manic “Helter Skelter” will shake a Seattle arena after McCartney’s second show on Tuesday.

If the pandemic has taught us anything, it’s not to take these moments for granted.

I can’t buy myself love

I have to bring you into my life

To come to me

let me roll it

I may be amazed

I just saw a face

Despite all the dangers

Be for the benefit of Mr. Kite!

You never give me your money

I have a feeling