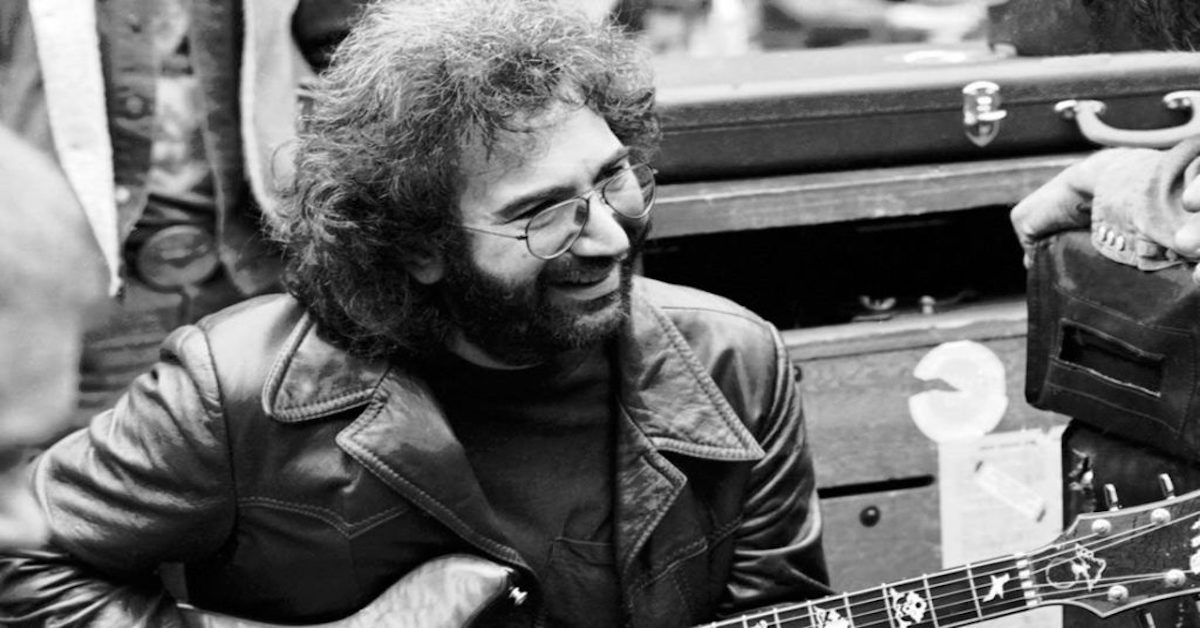 It was as simple as that.

In the summer of 1971, having recently completed my freshman year of college, I drove across Canada from New York with my friend Richie in his blue Volkswagen Beetle. We turned left in Vancouver, then spent two weeks on beautiful Orcas Island, Washington, where we learned that Jim Morrison had died in Paris. We then continued south towards San Francisco. It would be the first time for both of us, a place we wanted to visit because so many of our favorite bands came from there.

As we got closer to the Bay Area, we had a crazy idea: “Let’s go visit the Grateful Dead.” We had the address of their office in San Rafael, Marin County, so we pulled out the map and found our way. It didn’t even occur to us that maybe they weren’t there, or maybe they didn’t need two wide-eyed kids from New York.

As we pulled up in front of the house they used as their headquarters, there was Jerry Garcia standing in the driveway, leaning on a car, talking to a guy. What would we say to him? We didn’t want to go up to him with the tired old, “Hey man, we’re big fans.” Then Richie remembered that we had brought with us, for reasons I can’t remember, a bootleg vinyl LP of various Dead performances, possibly the first of its kind. We pulled him out of a suitcase, got out of the car and approached Jerry.

Related: Unlike Garcia, Neil Young wasn’t a fan of bootlegs

“Hey, Jerry, we just came all the way from New York with this bootleg. Wanna hear it?

He took us to an upstairs room with a huge stereo system, put on the record and lit a joint, which he passed to us. It was the best weed I have ever smoked. He had them come the whole time we were there.

Listen to “Not Fade Away” / “Goin’ Down the Road Feeling Bad” from the Grateful Dead’s self-titled 1971 live LP, also known as Skull and Roses. The shows for the album were recorded just months before Writer’s Day with Garcia.

At various times, band members Bob Weir, Phil Lesh, and others entered the room, listened for a few minutes, and left. Jerry stayed with us for over an hour as we climbed higher and higher, talking about the music and everything that could have happened. Then he said, “Hey, have you ever heard the New Riders album?”

Well, no, how could we? We had seen the New Riders of the Purple Sage – which at the time included Garcia on pedal steel guitar – open many Dead gigs at that time, and we knew they were making their first studio album, but how would we have heard it? He wasn’t due out for a month.

Jerry walked over to a cabinet, pulled out a white album cover, pulled out the record, and put it on the turntable. The sound of “I Don’t Know You,” a song that NRPS often opened its shows with, came from the speakers.

Related: Read a 1976 interview with Garcia

Once the album was done, we knew it was time to go. Jerry took the record off the turntable, put it back in its sleeve, and handed it to Richie. “You can keep that,” he said. “I have more.”

When I last spoke to Richie a few years ago, he still had that acetate in the plain white blanket.

There would be other encounters with Garcia over the years; at that time it was quite accessible. A few years later, another friend and I, now living in the Bay Area, took part in a recording session in Berkeley with Jerry and his keyboardist of choice for his side projects, Merl Saunders. On other occasions, I’ve found myself backstage at a gig, usually at a club or whatever. The door was open and there were no bodyguards or aggressive roadies; we had just walked in and made ourselves at home. No one was paranoid about these things back then.

Garcia and the author in 1980, several years after they first met

Then, in 1980, several years after that first meeting, when I was now working as a music journalist, I had the opportunity to see Garcia again, this time as an interviewer. There’s the photo to your left, proof that I didn’t just dream it.

Related: Read the album 50 years later from the author of this NRPS album that Garcia played for him and his friend before its release.

By the mid-1980s, the deaths had become so huge that it would have been nearly impossible to just show up at their office and think you could just hang around. But I never forgot that afternoon when a musician I really admired was not only open to a few fans to visit, but seemed to enjoy him as much as we did.

Jeff Tamarkin, editor of Top Classical Bands, has been a prolific music journalist for more than four decades. He is the former editor of Goldmine, CMJ, and Relix magazines, has written for dozens of other publications, and has written liner notes for over 80 CDs. Jeff has also served on the Rock and Roll Hall of Fame nominating committee and as a consultant for the Grammys. His first book was “Got a Revolution! The Turbulent Flight of the Jefferson Airplane.’ He is also co-author of “Shell Shocked: My Life with the Turtles, Flo and Eddie, and Frank Zappa, etc.”, with Howard Kaylan.