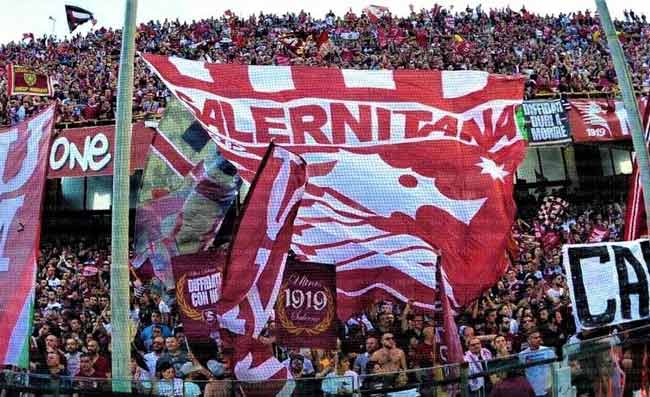 Angelo Forgione, writer and historian, analyzes for AreaNapoli.it the strong and senseless rivalry that the people of Salerno have towards the city of Naples.

We deeply regret to witness the disagreements between once again Salerno And Naples, expressed with more harshness in football, where the becerume often touches very high peaks. Not even a Neapolitan of refinement and blue cheering at the head of the Salernitana has served to reduce the friction between the two football squares, obviously, if it is true that precisely on the occasion of Napoli-Salernitana last January someone from the grenade showed annoyance for the confidence that Iervolino gave to De Laurentiis in the stands. Once again the sparks bloomed when least expected, on a Roman Sunday in which Roman fans shouted “You are like Naples” to Salerno, who responded “I hate Naples”.

Classic manifestations of curves, except that the controversy has flared up between the indignation of the Neapolitans and the stomach ache of the Salerno information sites. Tuttosalernitana (tuttosalernitana.com) did not like the comment on social media at all Maurizio De Giovanni: “But are you so obsessed? Do your narrow minds need someone so badly to hate? What a poor little people you are ”.

De Giovanni was therefore invited to present his books elsewhere, since he should be in Salerno on April 21, to present his latest work at Palazzo Sant’Agostino. From various quarters, in the city of Irno, the organizers of the meeting were asked to cancel it, and the writer took the situation head-on, advising them to give up because they were not wanted, complaining for his readers and local readers.

A sad story, very sad, because it does not take place in the football enclosure but expands the Salerno-Naples clash by contrasting the world of Neapolitan culture with the social reality of Salerno. And it’s no longer a question of verifying the confessions on Radio Punto Nuovo by Gaetano Ferraiuolo, editor of Tuttosalernitana.com, right after the Napoli-Salernitana last January, about his anti-Neapolitan sentiment regardless, like a fan of the curve. It is exactly like this, through the use of the media read by so many fans, that we end up inflaming souls, and everything ends up involving other areas.

From the day of Salernitana’s promotion to Serie A, the most ardent grenade fans have put aside their bitter rivalry with the Cavesi and Nocerini and have begun to turn their attention to the Neapolitans. Since that day, and ten months have passed, the sites of the granata area have not been able to digest the considerations of Maurizio De Giovanni and also of the writer on the ancient inferiority complex of those grenade fans who on that day sang choruses against the Neapolitans. Inferiority complex they have also underlined two Salerno authors such as the writer Diego De Silva and the anthropologist Paolo Apolitofor which that sense of minority exists and how, and is condensed in the acid called citizensor “Si Salierno held ‘o puorto, Napule was dead”.

Underlining the Salerno complex does not mean detesting Salerno but it means advising the people of the beautiful city of Campania to abandon the sterile comparison with Naples and to start enhancing the new city identity; it means focusing on oneself rather than relating in a provincial way with the nearby metropolis of iron, millenary and unparalleled identity.

The territorial antagonism of Salerno towards Naples is not only a football issue but has historical roots that go back to the Angevin age, when the proclamation of Naples as the capital of the Kingdom of Sicily in place of Palermo was considered by the Salerno people an affront to them by Carlo I D’Angiò. After all, Tuttosalernitana has heralded certain moments in Salerno’s history: “We know that a city that was the capital of Italy, which saw the birth of the Salerno Medical School, which has natural and architectural beauties of absolute level and, in terms of football, a fantastic supporters have nothing, but absolutely nothing to envy to Naples “.

The provincialism of Salerno lies exactly in boasting a Salerno capital of Italy definition that has a symbolic value but does not correspond to the historical reality of a very troubled historical moment such as that of the Second World War and the last phase of transition from a condition of dictatorship to the new Italy. The city of Salerno, like that of Brindisi a few months earlier, was more concretely the seat for about five months, in 1944, of the first governments of liberated Italy and shelter of the Savoy. Capital of Italy it never was, and in that period of confusion and upheaval Rome continued to be, albeit occupied. In fact, there is no trace of royal decrees or equivalent acts of the Parliament for the transfer of the capital of Italy from Rome to Brindisi and from Brindisi to Salerno, such as those in black and white that formalized the transfer of the capital from Turin to Florence and then from Florence. in Rome.

There are only formal and non-substantial acts, so much so that in 2011, at the inauguration ceremony of the celebrations of the 150th anniversary of the Unification of Italy held in Reggio Emilia, the authorities of Rome, Turin and Florence were invited and not those of Salerno and Brindisi.

If Salerno, a small city of 80,000 inhabitants, was chosen in early 1944 as the seat of the government, it is because a year earlier it had been the scene of the landing of the troops of the Anglo-American Allies, following which the German troops had withdrawn to the north. of the Volturno river, making possible the conquest of Naples, the real and great objective of the landing itself.

Naples, which for centuries had been the shining capital of a kingdom that had borne his name, and which was to become the capital of Italy by decree in 1864, when the ministries had to be removed from the Habsburg threat. It had to become one also because the most populous and best-known city in Italy, already equipped to be the capital, according to the indications of the Council of Ministers of the Kingdom of Italy, but the smaller Florence was preferred because Vittorio Emanuele II opposed it, of course that the great Bourbon ex-capital would not have exited and would have had to give up Rome: “Going to Florence, after two years, after five, even after six if you want, we can say goodbye to the Florentines and go to Rome; but one does not leave Naples; if we go there, we will be forced to stay there. Do you want Naples? If you want this, mind you, before making the resolution to go and establish the capital in Naples, it is necessary to make the decision to renounce Rome definitively “.

About the glorious Salerno Medical School, the most important medical institution in Europe between the 10th and 13th centuries, it is good to remember that it began to decline from the institution of the University of Naples onwards, and was supplanted by the splendor of the Naples Studio. , or the Neapolitan School of Medicine, which ended up giving birth in the eighteenth century to the giants Cirillo, Cotugno, Troja, Miglietta, Galbiati, Palasciano, Cardarelli, Moscati, Pascale, Monaldi, until the suppression of the Salerno institution in 1811, after centuries of activity irrelevant, wanted by Gioacchino Murat in the global reorganization of public education in the Kingdom of Naples.

There is no doubt about the natural and architectural beauties of Salerno. Salerno is truly a beautiful city, pleasantly located between the Amalfi and Cilento coasts, but even in this it suffers from the proximity of Naples, a jewel of international appeal set between the Phlegraean and Sorrento coasts. Who benefits from the anti-Neapolitan antagonism of Salerno? It is unproductive on all fronts, even on the football one, where the North has always dominated national events. To claim that Pro Vercelli won more than Napoli (but also more than Roma, Lazio and Fiorentina) means ignoring that the Italian league was monopolized from the north until 1926, when clubs such as Napoli, Roma and Fiorentina did not exist and Pro Vercelli, which in that football of the “industrial triangle” had won its “scudetti”, was already beginning to decline in the face of the growth of clubs in the large northern cities.

Salerno has also been drowning in the Southern Question for a hundred and sixty years, and football is certainly no exception. After all, the relegation of Salernitana in 1999 to the benefit of the AC Milan championship, with the shadows of that championship final, should make Salerno reflect on the fact that the South, in football as in everything else, would need to compact instead of be confrontational.