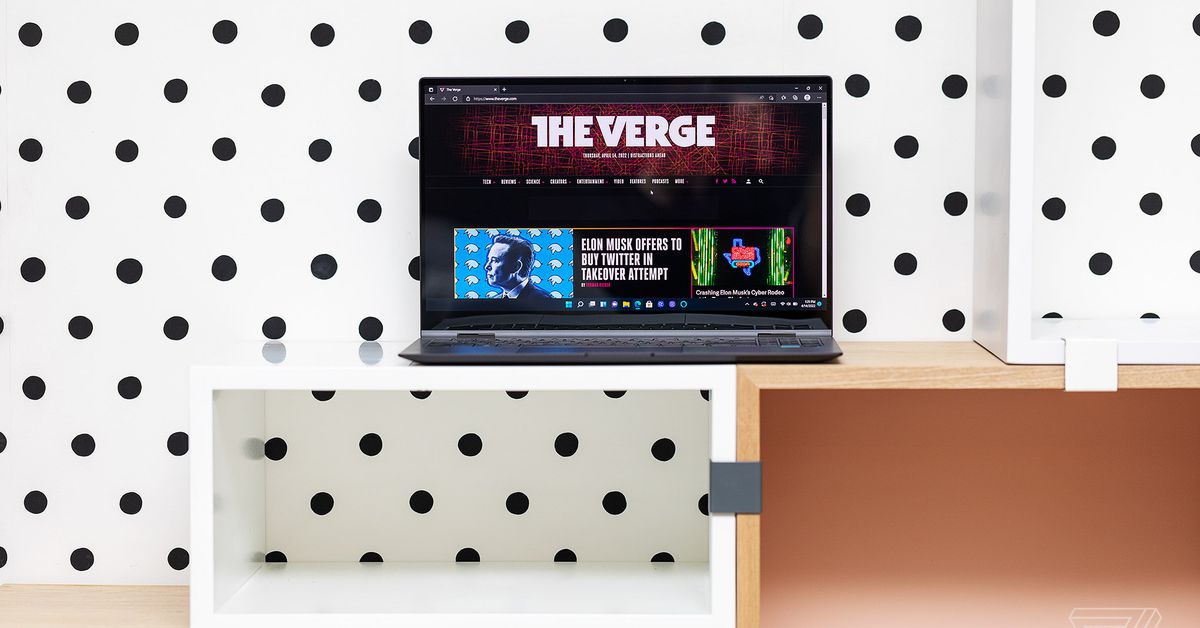 Lightweight chassis, large screen. That’s all you sign up for when you buy a Samsung Galaxy Book. They’re not the most powerful laptops around, and they’re not what I’d recommend people for, say, work. But for those looking for a great multimedia laptop that’s easy to carry around, this is the one.

That’s certainly the case with the Galaxy Book2 Pro 360, the latest 15-inch convertible addition to the Galaxy Book lineup. It’s 3.11 pounds, it’s less than half an inch thick, it’s got an OLED screen, and it’s just $1,549.99 as revised. It’s a good option for anyone buying into the ultraportable space, but has a few extra features that Samsung superfans will particularly like. If I was already plugged into the Galaxy ecosystem, I’d probably order this laptop right now because there really isn’t much not to like as long as you know what you’re getting.

Samsung is famous for its displays, and this Galaxy Book doesn’t disappoint on that front. It’s a brightly colored OLED panel – videos and photos looked great. It’s fairly accurate, covering 100% sRGB gamut, 96% AdobeRGB and 99% P3 in our tests. Last year’s 15-inch Galaxy Book Pro 360 was a little dim, coming in at just 276 nits, but Samsung solved that with this display, which hit a much brighter 391 nits. The touchscreen also supports Samsung’s S Pen (included in the box), which you can use for note-taking, sketching, and other stylus stuff.

One thing to be aware of is that the screen is 1920 x 1080 resolution, so the image is noticeably more pixelated than what you’d see on a higher resolution display, like the 3546 x 2160 OLED on the Dell XPS 15. These are starting to get quite expensive, though, and this is probably one of the best looking panels you’ll find at this price point. (It’s also 16:9, which isn’t my preference but isn’t as cramped on a 15in as it is on smaller machines.)

Next, on the weight. At 3.11 pounds, this laptop is a cinch to carry around. It’s basically the same weight as last year’s model (which otherwise looks very similar to this year’s, although the Book2 comes in a new Burgundy color). For context, that’s more than a pound lighter than the Dell XPS 15 OLED or Apple’s 16-inch MacBook Pro (and it’s even lighter than the 14-inch MacBook Pro). I can’t think of many 15-inch convertibles lighter than this – there are certainly lighter shells, like the 2.44-pound LG Gram 15but it’s hard to find them with OLED at this price.

Before we continue: If you’re not impressed with the two features I just mentioned, this probably isn’t the laptop for you. These are the two standout qualities of the Galaxy Book range and the two places where it sits solidly at the top of its class. They are what you pay for if you buy this.

Alright, for anyone still with me, let’s talk about the software. While this computer should have broad appeal, Samsung fans will get a bit more out of it than everyone else. You can charge it with Samsung’s 65W universal charger, which can also charge Galaxy phones and tablets. It also comes with Samsung’s One UI interface tweaks, which means it has many apps (with identical icons to their mobile counterparts) that Samsung users will be familiar with. There is a long list of Samsung apps that you can sync across devices. (I personally found the number of Samsung programs intimidating here – I counted 28 in total – but those with Galaxy phones will probably already know which to use for what.)

The feature I found most useful was Second Screen, which, as the name suggests, allows you to use a Samsung tablet as a second screen, similar to Apple’s Sidecar feature or the third-party Duet screen. Display. I tried it with a S8 Ultra Tab, and it probably took five seconds to get up and running. It worked really well – I could easily drag and drop windows between the two devices, and while I did experience a slight cursor lag when navigating on the S8, it was very usable. If I were to buy a Galaxy Book, I would probably also consider buying a Galaxy Tab because the ability to easily whip out a second screen at an airport or coffee shop seems very handy (especially if you only need to bring one charger), and the fact that everything is first party is a good sign for consistent integration across the entire line.

I was also able to easily share photos between the Galaxy Book and Tab S8 using Quick Share, Samsung’s AirDrop competitor. It was a bit slower than AirDrop between a Mac and iPhone, but it still worked.

And there’s also Studio Mode, which includes a number of tools to help you look your best on video calls. Some of them worked well. Auto-framing did a good job of keeping me in frame as I moved, and the blur properly blurred out the busy background behind me. Others are still a little clumsy; The color, which replaces your background with a solid color of your choice, had a little trouble determining where the edges of my hair were. Some of the face effects, which are supposed to shrink your nose, enlarge your eyes, and generally make you more conventionally attractive in real time, made me look a bit like an alien. But they’re all there, basically, if you want to use them with the Galaxy Book2’s 1080p webcam (a welcome upgrade over last year’s camera).

Probably the only downside of the Book2 360 is port selection. There are just three USB-C ports (one of which is Thunderbolt 4), a microSD, and a headphone jack. It will be fine for some people, but I would like to see an HDMI or USB-A there.

Despite the “Pro” moniker, the Galaxy Book isn’t ideal for intense professional workloads or gaming, given its lack of a discrete GPU or H-series processor. But it could certainly keep up with any task. I needed, including all sorts of streaming, Zoom calls, and photo editing, both on battery and powered up. It even beat the 11th Gen Dell XPS 15 on Cinebench R23 Single (reflecting Alder Lake’s advancements in single-core performance) and wasn’t too far behind on the multi-core benchmark. It’s a solid processor.

The bridge was often a little warm in the keyboard area, but never uncomfortably. The only time I heard fans was when I was running a long Zoom call on battery power over a huge pile of Chrome tabs, and they weren’t loud enough to be distracting even then .

Battery life was also quite good. I averaged eight hours and 47 minutes of continuous work with the display at 200 nits of brightness, which is the best result I’ve seen so far from a 12th Gen Intel processor. That’s not quite as much as I saw with last year’s Galaxy Book Pro 360, which gave me almost 10.5 hours of charge, but it should still get you through spend a full day at work.

As long as you know what you’re getting, I really don’t have many complaints about the Galaxy Book2 Pro 360. Its battery life is good, its screen is great, and it’s one of the 15-inch the lightest you can find. The various features of the Galaxy ecosystem will be the icing on the cake for owners of Samsung phones and tablets. But the real highlight of this laptop is how easy it is to transport places (and how easy it is to pack a second screen).

I can’t think of a model I’d buy over this one if I was looking for a lightweight 15-inch multimedia device (rather than a powerful workstation). The first that comes to mind is Microsoft 15-inch Surface Laptop 4. But it’s still quite a different device; although it’s slightly (and, in my opinion, not noticeably) lighter, the top model gives you half the storage of that Book2 for the same price, it’s not a convertible and it has a screen not OLED. For Samsung enthusiasts, I think the Galaxy Book2 Pro is a no-brainer, and for everyone else, I think it’s worth considering. The slim port selection means it wouldn’t be my laptop of choice, but it offers a great package in a space that doesn’t have a ton of competition.