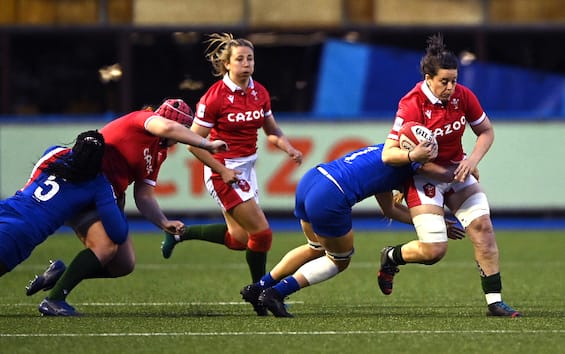 The team coached by Ioan Cunningham, after various past vicissitudes, is finding again, also under the pressure of new central contracts, operational since last January. Lillicrap and her companions had a surprising start with two comeback successes, thanks also to the strength of the changes, which had even projected them to the top of the ranking

Italy will be the first national team to close their Six Nations on Saturday 30th in the match at Arms Park in Cardiff against the hosts of Galles, super saturday opening challenge which will end at 9pm with Ireland-Scotland from the Kingspan Stadium in Belfast, Ravenhill, which will return to host a women’s test from the final won by the Black Ferns at the 2017 World Cup. In the middle of course the most awaited challenge, the real final between France and England at the Jean Dauger in Bayonne, a match that has already been sold out for weeks.

A stage in the myth of Ovalia

L’Arms Park in Cardiff is one of those names that resonate like legend in the world of the oval ball. It is located just behind the Millenium Stadium (today Principality following the name of the official sponsor) on the north side, in what is called the Glanmor’s Gap, in honor of Glanmor Griffiths, longtime president of WRU, the Welsh federation, and main proponent of the construction of the new stadium. The last modernization of the plant with about 13 thousand seats and which has a surface in synthetic grass dates back to 1999, but its history is very extensive. The first construction dates back to 1881 and was once divided into Cardiff Rugby Ground and National Stadium, giving way to the construction of the Millenium Stadium in 1997. It was originally called Great Park, owned by the Marquesses of Bute, and was located behind the Cardiff Arms. Hotel, to which, after its demolition in 1878, it obviously owes its name. In 1927 the first live radio match between Wales and Ireland was told from its stands, while part of the stand was demolished in 1941 by an attack by the Luftwaffe. Behind it flows the River Taff, which runs through the capital of Walesand here, where cricket was initially also played, today the Cardiff Blues play their internal matches.

Women’s Wales played their first match in 1987 against England And boasts two second places, in 2008 and 2009 in the Six Nations. It is the country that hosted the first World Cup in pink in 1991, then coming in fourth place in the following edition in 1994 in Scotland, in what remains the best world championship finish, waiting to see how things will go in the autumn in New Zealand, where he obtained the qualification without going through the play-offs thanks to the seventh place in the last edition, obtained by defeating the hosts of Ireland in Belfast 17-27. In the next one she will be included in Pool A with Scotland, Australia and again against the host nation, New Zealand.

It can count on a total of 183 registered teams, but has gone through critical moments, at a technical and managerial level. Before the farewell of Rowland Phillipsformer coach also in Italy with the Aironi franchise and father of the former captain and hooker Carys, then the one in July of another coach, Warren Abrahams. A letter of attack from 123 players was then delivered to the federation, complete with online subscription that collected over a thousand signatures. The main object of the dispute is the programming in Welsh women’s rugby, which in the meantime has seen one of the historic clubs fail, Swansea, and with the WRU itself almost forced to invite the girls of the national team to emigrate to the Allianz Premier 15s, the English championship , where in fact most of the athletes play today.

Calm after the storm

In January, the turning point arrives, with the first twelve central contracts that guarantee a sort of professionalism to the girls, who carry out four weekly training sessions at the federal structures, while as many girls, defined retained players, train in groups twice a week. There is talk of about 19 thousand pounds a year plus attendance fees for matches in the national team, for a total investment that would be around 2 million pounds.. They resign or ask for leave of absence from their respective jobs and end up under contract with the federation, therefore, the team captain Siwan Lillicrap, Natalia John, Carys Phillips, Gwenllian Pyrs, Donna Rose, Keira Bevan – scrum half grown up playing with forward Josh Adams (player of the match against Italy, author of the beautiful gesture with which he wanted to give the medal of best in the field to “our” Ange Capuozzo) and the youngest player to make his debut at Six Nations at 17 years and 327 days against Italy in Padua on 21 March 2015 -, Ffion Lewis, Lisa Neumann, Elinor Snowsill, Hannah Jones, Jasmine Joyce – inserted last year by World Rugby in the dream team and fourth at the Tokyo Olympics with Great Britain -, and Alisha Butchers. Small gossip, the last two in February announced their engagement, while Hannah Jones received the marriage proposal directly on the pitch on November 20, after a 7-24 loss in the test against Canada. The challenge on Saturday will be a small personal derby for her, because her boyfriend is Dino Dallavalle, prop with a past in Viadana as well as a national youth team, now working at Llandovery, who runs a chain of ice cream shops across the Channel with his family.

The latest news concerns the new technician. The task of leading the national team has been entrusted to Ioan Cunningham, former coach of the under 20s and assistant to the Scarlets with Wayne Pivac first and then Brad Moar. His assistants Geraint Lewis, Richard Whiffin and the former Irish international Sophie Spence. In November, the aforementioned defeat against Canada came, but also the victories with Japan (23-5) and South Africa (29-19), with a hat-trick from the returning Carys Phillips. In March, however, they lost 23-31 in the last test of preparation for the Six Nations against the USA. The goal for this year’s tournament was to find the best verve and avenge the sixth place last season, determined by two very heavy 0-point defeats against France (53-0) and Ireland (0-45), in addition to the final match against Scotland, lost 27-20. Lillicrap and her companions have so far succeeded in full, becoming the real surprise at the beginning of the tournament, and are now aiming for three overall victories in the event. Of the initial 37 called, Cunningham proposed six potential rookies, finding after the injuries the extreme Kayleigh Powell and the prop Kelsey Jones, the only one, with the Scottish Chloe Rollie, able to mark a goal for England in this edition. With them, you can also find Lleucu George, who was missing since March 2020, and Sioned Harries, even from November 2019.

The surprise of the 2022 edition

The latter was the protagonist in the second match won in a comeback 24-19 after being 7-19 below, against Scotland, with a goal and a performance of substance that, despite entering the second half, earned her the title of best in the field. Not new venture this year, considering that the first honor of player of the match against Ireland in the inaugural meeting he had gone to the pylon Donna Rose, author of the double overtaking in the umpteenth comeback at the RDS in Dublin under the watchful eye of Brian O’Driscoll, triumphing 19-27. Mention must be made in this match as well Sisilia Tuipulotu, second line rookie, daughter of the former Tongan international Sione, but above all a cousin of the even better known brothers Vunipola, Mako and Billy, respectively prop and number 8 of England, and of the third center of Wales, Taulupe Faletau. Sure, after the first two exploits, the inevitable setbacks came with the battleships England (58-5) and France (5-33), a debacle that must in any case be detailed considering that the Red Roses, already very strong in themselves, played the first housewife of the event with maximum motivation in front of the record public of Kingsholm in Gloucester, while the transalpines gave life to Cardiff on the last day at the best performance of this Six Nations. In general, however, what remains of this Welsh team is the ability to have been able to quickly reverse the trend and to now be able to count on a good depth, with often decisive changes in progress and a certain habit of reversals of result. A challenge, in short, anything but simple for the Azzurre.