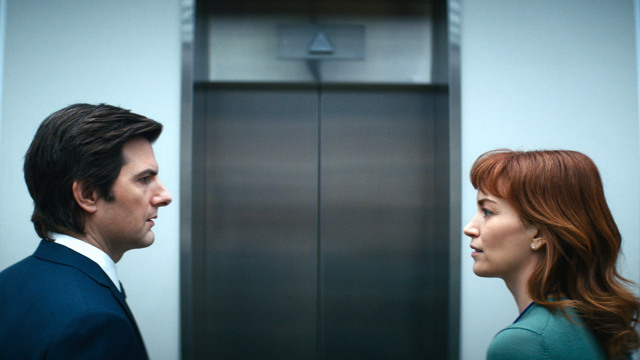 We’ve all seen many dystopian thrillers set in the workplace by now. It is therefore surprising that Severance (Demerger) by Ben Stiller you still find a way to hit a nerve.

The new nine-episode series, produced by Apple TV + and directed largely by Stiller, focuses on Lumon industries, a company with a controversial program designed to “surgically split” employee work memories from personal memories, making them partially amnesic most of the time. As newly promoted head of department Mark Scout (Adam Scott) explains to intern Helly R. (Britt Lower), participation in the program is totally voluntary and therefore “every time you find yourself here, it means you have chosen to return.”

It is precisely that sentence that strikes the most exposed nerve, mercilessly suggesting the idea that we have chosen a job and that we continue to choose it. It’s one of those baleful propaganda phrases that oppress our lives: the idea that in our mad rush to make a living, we could always make much better “choices”. If we don’t like a job, why don’t we find another? If our career path turns out to be disastrous, why don’t we just change careers? As if we lived in a giant playground where, when you get tired of the slide or the gym, you can always try the swing.

The work face
The inherent horror of Demerger he captures well the familiar feeling of having taken a path with destiny sealed. We discover that 40-year-old Mark Scout made the irrevocable choice to work on the “split plan” after his wife’s death, in order to be freed from the overwhelming memory of her death – at least occasionally – while working at Lumon industries. We see him sobbing in his car in the parking lot before entering the huge office building. As he climbs into the elevator, we see his face transform from the depression of his agonizing personal life to a brighter, more alert “work face”. All while his brain is cleared of whatever happened during the hours spent away from there.

We know the reason for this transformation, which however also recalls the terrible feeling of when we feel obliged to assume a cheerful and available “work expression” to face the day, regardless of what may happen in our personal life.

Mark’s work situation is full of corporate horrors, who knows well who has spent at least a time in those cold corridors that open onto terribly similar offices and conference rooms. Mark seems to have to walk miles through a monotonous white labyrinth to reach his office, where a series of four-person cubicles is strangely isolated in a huge, windowless space. There the team of the Macro-data refinement department works on a mysterious data cleaning process: he watches an endless series of numbers appearing on their computer screens until they spot the ones that “look scary”, then throw them in the trash. It takes some practice to recognize the “scary” numbers.

This team includes know-it-all Dylan (Zach Cherry), who buys all the productivity rewards – useless stuff like the company’s signature blue finger traps. The most coveted reward is a “waffle breakfast,” presumably because these workers don’t remember breakfast, as it is a meal they eat before they get to work. John Turturro stands out in the role of Irving, the oldest member of the team, tense and demanding in following the rules but also particularly vulnerable at work. Twice he makes the mistake of dozing off in his seat. The threatened punishment is that of having to go to the “relaxation room”. We do not yet know what happens in the “relaxation room”. But we understand that it must be something very bad.

Supervisor has a superficial smile – he’s so sinister, he’s so clearly a spy that anyone who has ever had a job will see him as a familiar figure

The new recruit is called Helly. The series begins with an overhead shot of this character lying unconscious on a conference table, having just undergone brain surgery that separated his working life from his personal one. This “orientation” process goes from repeated and unsuccessful attempts to escape from the building: Helly’s transition to the “split plane” is not going smoothly, even after they show her a video in which she herself certifies that she freely did this. choice. And her uncooperative attitude begins to have an effect on Mark, who is generally very relaxed.

Helly replaces Petey (Yul Vazquez), Mark’s “work friend” who one day doesn’t show up at the office. The frightening director Harmony Cobel (Patricia Arquette), with long silver hair bringing out the icy blue of her eyes, explains that Petey “is no longer part of the company”, which is why Mark will take up his job as a Department head. But there is no explanation for Petey’s sudden absence. Unusually upset by this, Mark is vulnerable when Petey approaches him in private life, even though she has no recollection of him. “You were my friend,” Petey tells him, adding with a disturbing emphasis, “I was your best friend.”

It is clear, of course, that Mark is going to “take the red pill” and follow Petey to find out the truth about what is happening at Lumon industries. Petey literally hands him a red envelope that says “Lumon blue”, with an address inside where he can find information about the company.

The one who is constantly on guard is the supervisor of the “split plan” Seth Milchik (Tramell Tillman), an executive with a superficial smile: so sinister, so clearly a spy, so eager to get everyone to participate in mandatory exercises of team building, that virtually any viewer who has ever had a job will immediately see him as a familiar figure. Not surprisingly, the creator of the series Demerger, screenwriter Dan Erickson, drew inspiration from a series of office jobs he did when he moved to Los Angeles and said, “I found myself wishing I could jump right into the day. I wanted to disassociate myself for the next eight hours. Then I thought, ‘That’s the wrong thing to want. We should want more time for ourselves, not less’ ”.

By reworking this idea of ​​wanting to dissociate oneself from long moments in our lives, Erickson imagined the sci-fi representation of hell in the workplace that we see in Demerger. The fact that we find these representations so familiar also naturally stems from the recent wave of “major resignations” caused by the pandemic: 4.5 million people have voluntarily left their jobs, an “all-time high”, according to the Bureau of Statistics on Strength. US work.

What draws in Demerger it’s the desire to see the characters freed from their corporate trap before it literally kills them. There is a particularly frightening effect in the first episode, when Helly keeps walking towards the exit door thinking she is in the corridor leading outside, only to find that she is again going through the door to return to the same room that she just left. This forced, nightmarish return – to re-enter the door when you thought you had just stepped out – is an awesome and terrifying image of contemporary working hell.

Since “horror in the workplace” is the real driving force of the series, there is a great tension in having a character like Mark as the protagonist, a man willingly without memory who cannot stand his personal life. . He is trying to get lost in his use of him, and is struggling not to recognize how monstrous his working environment is.

There have always been a lot of Marks in the workplace. Wouldn’t it be nice to think that the Marks of this world are also getting to the point where they can’t take it anymore?

This article appeared in the US quarterly Jacobin.