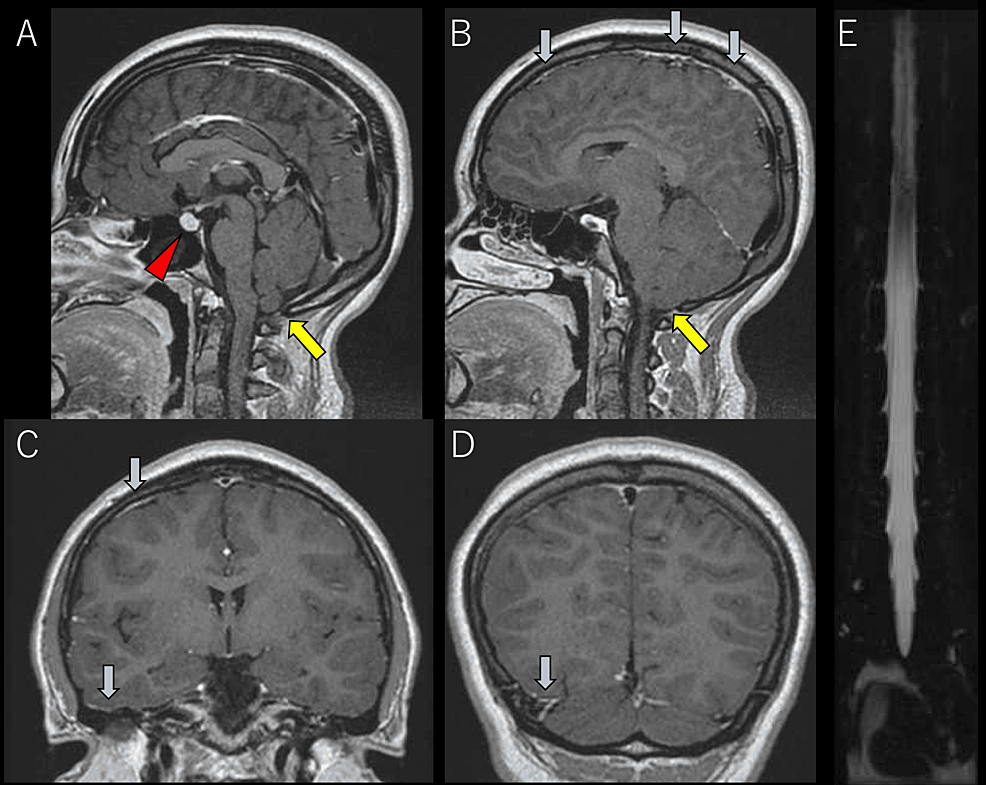 We present the case of a 13-year-old Japanese girl with no medical history who presented with a series of progressively worsening orthostatic headaches. We diagnosed spontaneous intracranial hypotension, aggravated by trombone playing and its Valsalva maneuver effect. She was admitted to our hospital and treated with rest and hydration, and was discharged on day 14 without any headaches during admission. However, her headache returned when she played the trombone, so she stopped it. She now plays percussion and no headaches reoccurred for a year. The headache in our case may have been further exacerbated by cerebrospinal fluid (CSF) leakage due to increased CSF pressure by the Valsalva maneuver while playing the trombone.

Intracranial hypotension usually manifests as an orthostatic headache accompanied by neck pain, dizziness and fatigue. Orthostatic headache is affected by posture. The headache persists daily, and for which the drug is less effective. The most common underlying factor is cerebrospinal fluid (CSF) leakage. It is hypothesized that dural structural weakness of the dura mater may be responsible for its idiopathic or traumatic tearing and resulting leakage [1]. According to the Japanese society’s official guideline on leakage of cerebrospinal fluid [1], traumatic intracranial hypotension is defined as having an onset of 30 days from the trauma. While spontaneous intracranial hypotension occurs more frequently in women in their late thirties and its annual incidence is underestimated at five per 100,000. Clinical manifestations are usually headache (98.5%), dizziness or vertigo (50.5%), nausea (49.0%), imbalance (42.6%) and posterior neck pain (34.2%). The leak site can sometimes be identified by magnetic resonance imaging (MRI). The most common treatment is rest, hydration, or an epidural patch with blood or fibrin glue, although sometimes surgery is needed. The results are generally good for most patients. However, variability in the presentation of signs and symptoms and low awareness of the disorder contribute to delayed diagnosis. [2].

Here we describe a 12-year-old girl who presented with an orthostatic headache due to spontaneous intracranial hypotension, aggravated by wind trombone playing. This is one of the rare cases of headaches aggravated by the Valsalva maneuver due to playing wind musical instruments [2,3].

A 13-year-old Japanese girl with no medical history presented with a series of progressively worsening orthostatic headaches over a month. There was no history of major trauma. Her orthostatic headache has a numerical rating scale of 6/10 with no pulsating features. The headache was not present in a sitting position but occurred a few minutes after standing. Mostly, she complained that the headache got worse when she played the trombone standing and sitting. There was no exacerbation of headaches due to coughing or toileting.

We diagnosed spontaneous intracranial hypotension from medical history and MRI findings, which worsened with trombone playing. We did not perform a more precise modality for leak location, such as CT-myelography, given the radiation exposure and his young age. We have prescribed 7.5g of Japanese herbal medicine Kampo Goreisan to treat suidoku condition (fluid disturbance such as edema, dehydration and dislocation) via inhibition of aquaporin channels- 4 [4]. Headache severity improved slightly but continued. Therefore, she was admitted to our hospital and treated with rest and hydration with 1500ml of lactated Ringer’s solution as per treatment guidelines. [1]. After a week of rest, we gradually increased the lying angle. The patient was discharged on day 14 without any headache on admission. However, her headache returned when she played the trombone, so she stopped it. She now plays percussion and no headaches reoccurred for a year.

This is one of the rare cases of headache caused by intracranial hypotension, which was aggravated by the Valsalva maneuver due to trombone play. The expiratory pressure needed to play the trombone is up to 65 cmH2O [5]. The value is not extremely vigorous, but playing a musical instrument requires high expiratory pressure; clarinet for 20-55 cmH2O, saxophone 15-80 cmH2O, oboe 35-124 cmH2O and trumpet up to 250 cmH2O [2]. The Valsalva maneuver caused by these expiratory efforts appears to have a potential role in headache exacerbation. Previously, spontaneous low-pressure headaches, exacerbated by bagpipe playing, were reported [2]. The other two cases were also reported with Chiari I malformation and hydrocephalus due to tumors whose headaches were aggravated by playing the cornet and horn respectively. [3]. The common mechanism in which playing wind instruments worsens headache is that the Valsalva maneuver interferes with venous drainage. Disrupted venous drainage increases intracranial pressure, leading to more CSF leaks or headaches. Table 1 shows previous reports on intracranial hypotension and wind musical instrument playing.

The headache in our case may have been further exacerbated by CSF leakage due to increased CSF pressure by the Valsalva maneuver while playing the trombone. We suggest that musicians who play wind musical instruments in which high expiratory pressure is required may be at risk for exacerbation of intracranial hypotension and that when these musicians consult their physicians about postural headaches, the possibility of spontaneous intracranial hypotension should be considered.

Data from randomized trials are not available to guide the management of spontaneous intracranial hypotension. Depending on the severity, the first treatment is a short course of conservative treatments over a few days or weeks, including bed rest, high oral fluid intake, caffeine, and abdominal binder. If these therapies could not improve the symptoms, 1 or 2 epidural blood patches in the lumbar spine are needed. A higher volume of blood patches has advantages over a lower volume. For patients with persistent symptoms, dynamic computed tomography-myelography or digital subtraction myelography has been used to locate the site of the leak and a directed epidural blood patch, glue injection or microsurgical repair is considered [6]. Also, in the Japanese guidelines [1], the first choice of treatment is two weeks of bed rest and hydration. After that, an epidural blood patch is considered. We completed 14 days of admission with bed rest and hydration, and the symptoms improved.