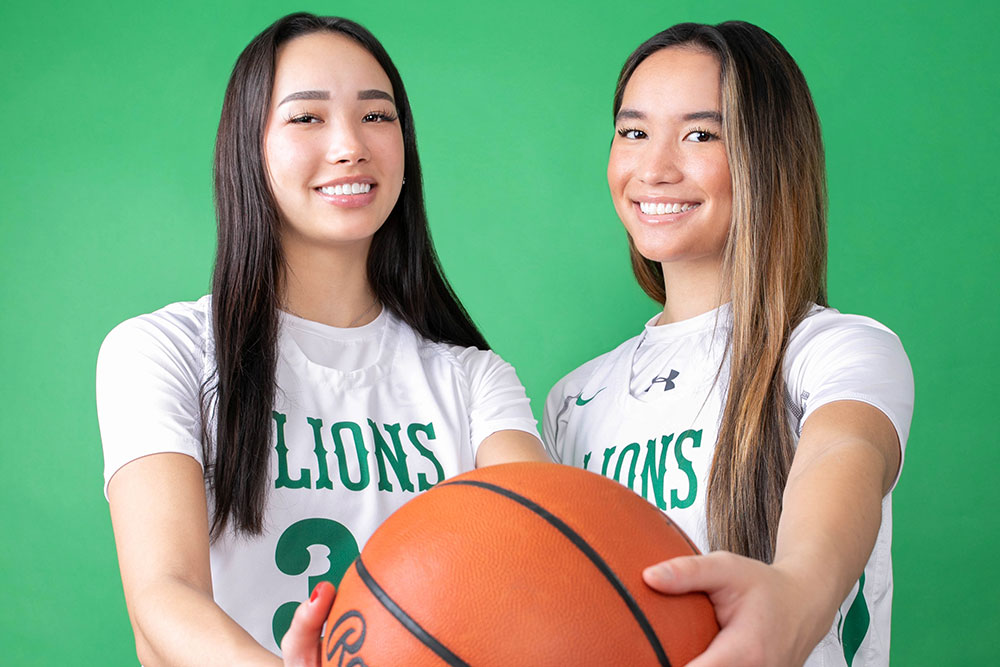 MADDIE (LEFT) AND MIA WEBBER, BOTH STAR BASKETBALL PLAYERS AT SOUTH FAYETTE HIGH SCHOOL, RECOVERED FROM SERIOUS INJURIES AND RETURNED TO THE COURT WITH THE HELP OF PERSONALIZED TREATMENT AND REHABILITATION CARE

M.ia Webber, a rising freshman at South Fayette High School, scrambled for a jump ball, proving once again why she was destined to be a star on the basketball team. As she tried to snatch the ball from her opponent that summer day in 2019, she felt a sharp pain in her shoulder so severe that she crumpled to the ground, unable to move.

During the ambulance ride to the emergency room, she wondered if she had just played her last game. Her shoulder of lei was dislocated, she learned. Once the doctor popped it back into the socket, the throbbing pain stopped.

The 15-year-old underwent physical therapy and began her freshman year as a starter, but she worried it would happen again. And it did – twice – each time more upsetting than the last. She wasn’t sure if she should hold back from the all-out style of play that made her such a force on the court. She even contemplated quitting the game.

The next summer, she and her parents consulted with Dr. Bryson Lesniak, a UPMC orthopedic surgeon who worked with the South Fayette football team, and he performed shoulder surgery on Mia. A year later, Lesniak treated Mia’s younger sister, Maddie, a basketball star who had knee pain after a particularly rapid growth spurt.

The Webber sisters are now in their junior and senior years – still stars on the basketball court and still healthy. Their treatment and recovery experience illustrates the way major sports medicine programs have forged agreements with a growing number of high schools and middle schools to prevent and rehabilitate injuries.

Gone are the days when athletes would limp off the field during practice or a game, left to their own devices to find care. Many high schools have contracts with sports medicine physicians like Lesniak. The doctor coordinates with trainers and conditioning coaches for a variety of teams; Lesniak is present on the sidelines at both home and away football games for certain schools.

UPMC, as part of the development of a world-class sports medicine program in Pittsburgh led by the late Dr. Freddie Fu, pioneered the partnership at Mt. Lebanon High School back in 1982. UPMC now has agreements with 67 high schools – up from 40 to ten August.

Allegheny Health Network has made school athletes a major focus of its sport medicine program as well. It has almost doubled its number of school district contracts in the last decade, to 29 in Western Pennsylvania, while also opening sports performance centers in Bethel Park and Wexford (a third is soon to open in Montour). The centers are staffed with athletic trainers and strength and conditioning coaches who can coordinate with orthopedic surgeons and primary care doctors. Aside from the physical therapy, which can be covered by health insurance, the centers also offer conditioning and strength training. Designed to prevent injuries and increase performance, the extra training is paid out of pocket and is popular among high school athletes.

The programs are highly individualized to each athlete’s needs. “Even within a sport, there’s different demands,” says Dr. Patrick DeMeo, institute chair of the Department of Orthopedic Surgery at AHN. “So a quarterback is going to train differently than a defensive tackle.”

On a recent day, Joey Daniels, a senior quarterback at Mt. Lebanon High School who led the football team to the school’s first state championship in December, was doing a series of upper body and other exercises. “I come here to strengthen and get better as an athlete and keep improving as a football player,” he says. “These guys have been good at teaching me how to stretch and do other things.” He and a few other football players also went to the center for cryotherapy, or cold therapy, after games.

Gianna Girol, a senior at South Park High School, was throwing a heavy medicine ball against the wall, an exercise designed to prepare the sprinter and hurdler for the upcoming track season. She was behind in her training because of a collision with an opponent on the soccer field last fall, resulting in a concussion that led to facial surgery on her orbital bone.

“Heavier lifts are hard to do at a gym on your own,” she says. “It’s a lot safer here.”

DeMeo says the centers are geared toward the high school athlete. As medical director for the Pittsburgh Pirates and a sports medicine surgeon who has worked with Olympians and many other elite athletes, he believes high school athletes are the most challenging to treat.

“You can only be a high school senior once – and you never get that chance back. So they don’t ever want to stop playing, and it’s hard to pull them out of a game. A professional athlete, if he’s on the disabled list, he’s going to get paid. But a high school senior has geared their entire psychosocial development around their sport. So when they get injured during the first week and it gets taken away, that’s psychologically devastating. I take that to heart. “

He recently treated a 17-year-old junior who was a top soccer player, poised to sign a letter of intent for a full college scholarship. At a national tournament, she tore her anterior cruciate ligament (ACL). “She was devastated. She was worried about losing her college scholarship. “

He empathized with how terrible she felt but assured her that the problem was fixable and that after surgery she would play again.

He also treated a high school pitcher who had hurt his elbow and could no longer throw the ball. The only way he could get back to baseball was to undergo Tommy John surgery, which repairs the torn ulnar collateral ligament inside the elbow (It’s named after left-handed MLB pitcher Tommy John, the first to get the surgery in 1974 and return to play ). DeMeo told the student he ordinarily wouldn’t recommend such major surgery to an athlete who wasn’t going to play baseball past high school.

But the athlete said, “Look – the only thing I can do is pitch. I want to pitch. So fix my elbow. “

So DeMeo performed the surgery to salvage the player’s last season on the mound. “Every athlete is different,” he says.

With the increasing pressure on kids to specialize earlier and play year-round, sports medicine doctors say they are seeing an increase in overuse injuries. That is especially true of baseball and softball pitchers who throw overhand year-round, injuring their elbows and shoulder joints in the process.

The problem is so acute that the American Orthopedic Society for Sports has implemented a program called STOP (Sports Trauma and Overuse Prevention). Through its website – stopsportsinjuries.org – the program offers tips on how to vary workouts and take breaks.

Lesniak, who is team physician at the University of Pittsburgh, advises young athletes and their parents to take at least three months of each year off from overhead throwing. Kids can reduce repetitive injuries by playing multiple positions in the same sport, such as catcher and pitcher in baseball. He also talks about the benefits for high school students who play multiple sports, even though it can be hard for serious young athletes given packed schedules and overlapping sports seasons.

“There is a lot of pressure to play year-round,” Lesniak says. “There is a travel season for baseball, and a travel season for hockey and a travel team for volleyball. There is pressure that if you don’t play for this club or that club, you won’t get exposed to this coach and the next level. Parents often don’t hear that college recruiters love an athlete who can play multiple sports. Beyond the injury risk of specialization, there are definitely advantages of playing multiple sports, ”including the strengthening of muscles and greater agility.

Besides baseball overthrowing injuries, sports medicine doctors say they are seeing an increase in knee injuries and stress fractures among female athletes, particularly those who play soccer and basketball. Sports medicine physicians say there is likely a combination of factors, including limb alignment and hormonal changes.

“Women are seven times more likely than men to tear their ACL,” says Lesniak. Both UPMC and AHN doctors say they have instituted preventive programs that reduce the incidence of knee injuries in female athletes.

Concussions are also common among hockey, soccer and football players, while cheerleading injuries – which, Lesniak says, can be particularly severe – are on the rise, as fliers are thrown into the air and sometimes land hard on the ground or with their shoes in a teammate’s face. As a result, some high schools contract for a sports medicine physician to be present at certain events.

Many sports medicine programs are also introduced in middle school, when kids have to adjust to playing with bigger and stronger athletes, says Larissa Symington, a UPMC athletic trainer at South Fayette.

“Often what we see are kids from club youth rec sports in elementary school, who are used to playing with kids their own age,” she says. “Suddenly they are thrown in with kids who are much bigger. That is when we see a lot of injuries. “

Symington helped both Webber sisters recover from their basketball injuries. (Though both girls were treated with Lesniak at UPMC, she also works with other doctors that the athletes choose.) She had to make sure Mia was game ready after surgery to accommodate her scrappy style of play. “Mia is aggressive and reckless in the best possible way. She runs into situations, heedlessly, and I love that she plays that way. But we had to make sure she was coordinated and powerful within her playing style di lei to make sure she didn’t fall and injure herself again. ” Symington worked with a conditioning coach to make sure the athlete had the same range of motion in both shoulders.

Mia, now a senior who has been recruited by multiple colleges to play basketball, has opted to attend Penn State University – and not play. So recovering from her injury di lei before her sophomore year di lei gave her three more years of high school competition to round out her basketball career.

Maddie, now a 5-foot-11 junior being recruited by Division 1 schools, plans to play in college and is grateful for how both the surgeon and trainers helped her deal with the knee pain that followed her growth spurt.

Their parents, Mary Ann and Matthew Webber, couldn’t be happier with the way the school trainers coordinated with the surgeon.

“That really helped us as a family. We didn’t have to run around, trying to get to physical therapy appointments, ”Mary Ann says.

Adds Matthew: “The medical care that is available to our children is unbelievable.”

Breath coaching could assist decrease blood strain by serving as a ‘dumbbell for the diaphragm’: new examine