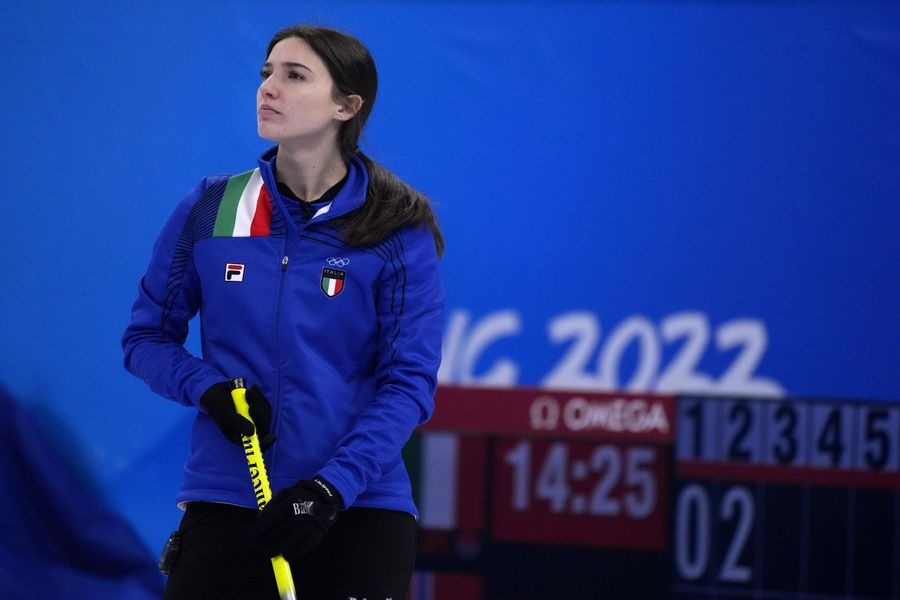 20.02: Tomorrow Italy will face Sweden for the sixth match of the round robin. That’s it for today, thanks for joining us and good evening!

20.00: We must also give the right merits to Estonia which in the sixth end managed to reopen the game with a great play that yielded 4 points. At that point Italy, which was ahead 6-1, suffered the psychological backlash but the Azzurri kept their nerve and took home a precious success that allows them to still be at full points after 5 games.

19.59: And, with some worries, the fifth victory of the Italian national team in the round robin arrives, at the end of a more painful match than could have been expected

19.57: The Estonians are rejected and they are at the point when the last shot by Stefania Constantini is missing, which is enough to fail to give the victory to the blues, since there are two other blue stones in the house

19.55: Bravissimo Amran who, despite the Estonian guard, manages to remove the stone that threatened the blue point. When there are two shots left at the end two blue stones to point. Let’s see the latest Estonian pitch

19.51: Situation unchanged when the last 4 shots are missing

7.45pm: The Estonians score 2 points and tie the score in half. We go to the extra end with a hand for Italy

19.44: Italy places the stone in place but with a rejection Estonia could turn the situation around

19.42: There are two Estonian stones in the points when the last two shots are missing. Constantini needs a double rejection, otherwise the Azzurri risk their first defeat

19.38: A fine Estonian stone after the first 4 pitches of the last end but there are two blue stones very close

19.32: There is an Estonian stone at the point when the last two pitches are missing. Italy could be forced to take the point and play it all out in the last end with the Estonian hand

19.27: Estonian stone and two blue stones on the same line after 2 pitches of the seventh end

19.25: Estonia gets back into the game with 4 points and now it plays all the way for Italy, which remains 6-5 ahead. The Estonians did well with a truly extraordinary shot on the penultimate pitch

19.22: The Estonians double fail and therefore be careful because Estonia could do an excellent booty. Right now you have 4 stones in the house in point because there are no blue stones

19.13: Double central guard for Italy, Estonian stone at the point after 3 shots of the sixth end

19.10: Surgery Stefania Constantini who, in a difficult situation, manages to rightly touch the blue stone that is positioned at the point: 6-1 Italy after 5 ends

19.07. Arman of rightness and now the stone at point is the Italian one, let’s see the choice of the Estonians in the last pitch available for the fifth end. To close Stefania Constantini

19.05: There is a large gathering in the house after 7 pitches with the Estonian stone, we’ll see if Arman tries to free the house with a fail

19.02: Estonian Stone at the point after 3 pitches of the fifth end

18.54: The blues limit the damage and suffer the first point from Estonia, forced to fine-tune the last stone. At the interval 5-1 Italy

18.48: Estonian Stone on point after 6 pitches of the fourth end

18.42: The last rejection of Estonia fails and Italy again steals the hand by winning the fifth point! Italy-Estonia 5-0

18.27: The triple rejection fails for the Estonians who hit the blue guard and send it to the point. 4-0 Italy after two ends

18.25: Central guard for the blue, now let’s see the attempt to fail, which is not easy for Estonia

18.24: When there are two shots left at the end of the end there are two blue stones in point but two more Estonian stones in the house. The situation is a bit dangerous because with a double rejection Estonia could score several points. Let’s see Constantini’s choice

18.20: Two blue stones in the second end after the first 4 pitches

18.17: Italy manages to score the first two points in a very complicated end. Azzurri ahead 2-0

18.09: Big traffic in the house, a blue stone in point after 6 pitches of the first end

17.58: Everything is ready for the start of the meeting. Italy with Constantini and Arman, Estonia with Kaldvee and Lill. Hand for Italy

17.55: Estonia, at the moment, have won two games against Japan and New Zealand and lost two games with Switzerland and Sweden.

17.51: This is a very important match in terms of qualifying for the knockout phase (the group winners fly to the semifinals, second and third to the playoffs).

17.47: The Azzurri, who have won the first three round robin matches against Japan, New Zealand and South Korea, will have to see it in the fifth match of their World Cup against Estonia

17.43: Our national team started off on the right foot in the world championship on the ice in Geneva (Switzerland) with four victories out of as many competitions and is alone at the top of the ranking of group A

17.40: Good afternoon to the friends of OA Sport and welcome to the live Italy-Estonia match, valid for the round robin of the 2022 Mixed Doubles Curling World Cup

THE LIVE LIVE OF ITALY-DENMARK OF CURLING FROM 10.00

The presentation of the World Cup – The chronicle of Italy-South Korea – Program, schedules, TV and Streaming of the Italian races at the Geneva World Championships

Hello and welcome to LIVE LIVE from Italy-Estoniamatch valid for the round robin of 2022 Mixed Doubles Curling World Cup. Our national team started off on the right foot in the world championship on ice in Geneva (Switzerland). Stefania Constantini has shown that she has not lost condition and concentration after winning the gold medal at the Olympics Beijing winter 2022 and well is doing Sebastiano Arman, who took the place of the injured Amos Mosaner

The Azzurri have the opportunity to add another pearl to the golden season of Italian curling and in the first few outings they have shown that they have all the credentials to be able to aim for a prestigious result. The Azzurri, who won the first three round robin matches against Japan, New Zealand and South Korea, will have to see it in the fifth match of their World Cup against Estonia in an important match with a view to qualifying for the knockout phase (the group winners flies to the semifinals, second and third to the playoff). Estonia have currently won two games against Japan and New Zealand and lost two games to Switzerland and Sweden.

OA Sport offers you LIVE LIVE from Italy-Estonia, a match valid for the round robin of the 2022 Mixed Doubles Curling World Cup: chronicle in real time, minute by minute, stone by stone, end by end, so as not to really miss a thing. It starts at 18.00. Have a good fun.